News reports abound today that the CIC will be restructured in order to allow for more investment opportunities in the United States. Indeed, the intention would apparently be to undo the CIC’s ‘bank holding company’ label at the US Federal Reserve Bank of New York, which would in turn eliminate the need to register with the Board of Governors of the Federal Reserve System and remove various investment restrictions that constrain all US bank holding companies.

Id. And he teases out some potential implications:
Id.  Additional insightful comments were provided by Andrew Rozanov, Rien Huizer.  Id.


Like their Western counterparts, the Hong Kong Media reported on CIC's possible restructure, but they all indicated that this news was from Western Media. So no more detail was disclosed. But they interviewed several local professionals who stated that the necessity of this restructure is weak, while the obstacles would be huge. Interestingly, there was an expression of some suspicion that the reason for Central Huijin's spin-off might not be merely US's regulation on bank holding companies. Instead, the reason might be internal to the ongoing power struggles over China's vast state controlled wealth.  The restructuring, then, would be just another step in the ongoing restructuring of China's state-owned assets that has been taking place for a while. See Investment and foreign media said the Department of payment options to consider stripping to avoid the U.S. investment review, Century Business Herald , July 7, 2010 (外媒称中投考虑剥离汇金股权 以回避美国投资审查 2010年07月07日 00:4121世纪经济报道) . Importantly, this report stated, again citing other media reports, that many of these issues are to be considered and perhaps resolved at the upcoming National Financial Conference (悬念待解。据媒体报道，原定于今年下半年召开的第四次全国金融工作会议，将涉及15项议题，其中就包括汇金的去向及对中投的诸多安排).  Id.  There was also a suggesiton that the move was prompted by difficulties in acquiring U.S. approval for the opening of branches of banks indirectly controlled by CIC through Central Huijin.  (此前，英国《金融时报》报道称，美方曾以工商银行[4.13 0.24%]和建设银行[4.71 -0.63%]控股股东涉及主权基金为由，暂缓批准两家银行在美开设分行的申请。美方认为，美联储的决定是基于技术原因独立作出。中美双方最初曾接近达成一致意见，但中投公司的成立使情况发生了变化。Id.).  The official position for some time has been that such restructurings are meant to maximize shareholder equity.  That has produced a management team that even officially is committed to change as market and investment context changes, and as the priorities of the state changes as well.  See, e.g., Xu Yaping, China Investment Corporation invested sector adjustment and reorganization to achieve maximum equity, News Center - China Network china.com.cn / news (April 30, 2009).
All of this might help explain the recent stories of reorganization designed to create a second sovereign wealth fund.--a "CIC No. 2". A recent report noted that a deputy director of the State-Owned Assets Supervision and Administration Commission (SASAC) disclosed in a conference that the State Council had approved to start a new SOE in order to actively manage state-owned assets. This new company would be formed  from a merger of several other old SOEs. See Chief:  Will There Be a CIC 2?, July 5, 2010 (首席：中投二号会不会难产？) (but plans still on hold).  This suggests that internal power allocation considerations indeed might be playing as important a role as either external market factors (more efficient penetration of American capital markets) or internal market factors (bank and financial sector capitalization issues).  For a recent insightful discussion o the problems, and potential opportunities, of internal restructuring, consider Hong Li, "China Investment Corporation:  A Perspective on Accountability," International Lawyer 43(4):1495-1513 (Winter 2009) (arguing that CIC is one effort at successful transition to a market economy and an instrument for depolitization  rather than a tool for the attainment of geopolitical ends, but that "the opaqueness of the internal structure without a firewall between state and market - - - is stirring controversies among the public and policymakers on the drive and method of the CIC investment."  Id., at 1512).  Yet on this score it might be useful to recall the closing paragraph of a Hoover Institution report:

SASAC’s mandate is to “own” these corporations and to manage them in the public interest. SASAC is thus ally and adversary of the central enterprises. SASAC is the ally of these large public corporations in that it seeks to improve their managerial competence and technical capability and increase the value of the state-owned assets. A vital strand in increasing the value of the public’s ownership stake is the increasing of oversight of the managerial stratum that actually runs these firms and reducing the “agency loss” that occurs through weak oversight. In a politicized environment, that makes SASAC the adversary of today’s entrenched managers and their politician allies. When the issues have an undercurrent of adversarial relation—as does the remittance of after-tax profit to the government—SASAC makes progress only slowly and tentatively, as it grinds against the formidable power of large, wealthy, and politically connected organizations.

Barry Naughton, SASAC and Rising Corporate Power in China, China Leadership Monitor, No. 24. (Spring 2008) The threat of a CIC2 might be as effective a tool of SASC against the managers of the CIC conglomerate (or competitors of SASAC at the state level), as it might be directed against market conditions.  What is clear now is that, flush with wealth, the Communist Party, the state apparatus responsible for oversight and direction, and the powerful managers of these wealth-retaining and producing enterprises, are engaged in a long and increasingly public battle not merely  over the direction of investment, or even its form, but also over which of them will control what portion of that wealth.  These temptations of power over wealth might well pose the greatest risk to the state system developed by Deng Xiaoping and his successors. 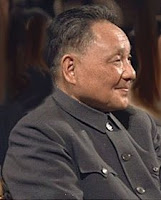 Deng Xiaoping in 1979
And it might pose the greatest challenge to the internal stability of the state since the death of Mao Zedong and the days of the Cultural Revolution. And in a sense, these moves remind us of the tremendously dynamic process that is the evolution of the Chinese state-market system, and its effects on the political and economic culture of a state now culturally far more developed than before 1976. 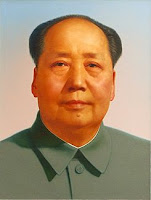