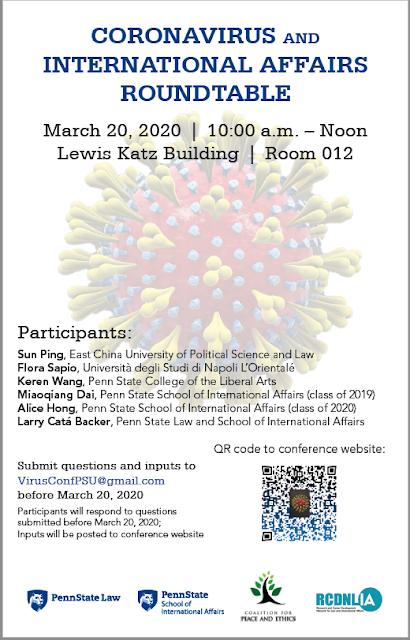 
The emergence of a new strain of coronavirus, COVID-19, one of a more lethal strain of a class of virus that cause disease in humans, has had a profound effect on virtually all aspects of human activity. As of 28 February 2020, 2,868 deaths have been reported of 83,905 confirmed cases in 57 countries (Worldometer, Coronavirus Death Toll (28 Feb 2020)). While the medical and health implications of COVID-19 are profound, the effects of the disease on governance, law, and international affairs will likely be even more significant and long lasting. The COVID-19 epidemic has brought out both the best and worst of individuals and human societies. Those best and worst impulses may eventually embed themselves into the patterns of behavior and expressed as law, policy or cultural bias. This Roundtable brings together experts in law and international affairs from Asia, Europe, North America and the Caribbean to discuss the collateral effects of CORVID-19 in those terms. More specifically participants will speak to (1) misperceptions about the situation in China; (2) the use of coronavirus as a veil for racism; (3) national responses to perceptions of crisis; (4) effects of coronavirus on the movement of people, investment and capital across borders; (5) consequences of coronavirus for the state of international affairs and legal structures (e.g., quarantines, education, supply and production chains, human rights versus collective responsibilities, etc.); (6) repercussions for big global trade projects, with specific reference to the Belt and Road and America First initiatives; and (7) effects on education and other service industries