The People's Daily recently reported on demographic information of Communist Party membership in China. China's CPC Members near 78 m, People's Daily (Aug. 2010). The roughly 78 million members includes the addition of 2.065 additional members over 2008. Id. Most of the numbers should not come as a surprise. What is noteworthy is the division among the occupations of CPC members. In some respects, CPC membership is more clearly beginning to reflect the maturity of a party in power rather than a revolutionary party of outsiders. Thus, while about 31 million CPC members were peasants and workers, almost 18 million were professionals and another 6.5 million were workers in Party and government offices. In addition, almost 28 million cadres, about 35.7% of the membership  were highly educated (junior college or higher).

This suggests the application of one of the great insights behind the often criticized framework underlying Jiang Zemin Theory (Sange Daibiao or Three Represents). 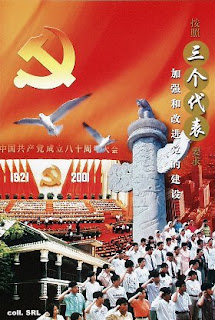 Accelerate and improve Party reconstruction according to the demands of the 'Three Represents', 2002
I have discussed some of the repercussions elsewhere.  See, Larry Catá Backer, The Rule of Law, the Chinese Communist Party, and Ideological Campaigns: Sange Daibiao (the 'Three Represents'), Socialist Rule of Law, and Modern Chinese Constitutionalism. Journal of Transnational Law and Contemporary Problems, Vol. 16, No. 1, 2006.

Sange Daibiao cannot be understood as another isolated instance of mere rhetoric; the importance of the connection between Deng Xiaoping Theory and Sange Daibiao, and their relationship to opening the membership of the CCP to previously excluded people cannot be underestimated. It is generally well understood that Sange Daibiao developed in the context of a campaign to open membership in the CCP to the emerging capitalist class in China. Related to that was the campaign to provide some protection for property rights, which saw significant amendments to the CCP Constitution. A number of commentators have noted that an important CCP goal is to co-opt the capitalist or market elements of Chinese society by offering a place in the CCP in return for adherence to CCP norms, including the basic socialist foundation of state organization. This is an important point—it suggests the very real ways in which membership in political society in China is structured around the leadership of the CCP, and that the nature of CCP leadership is more normative than political. This represents a great theoretical leap from the very structured vanguard theory of CCP membership, looking towards the conflation of a “rights rich” citizenship and with CCP membership. Id.

See also 三个代表, a gateway site to a collection of essays on the Three Represents Theory.

The CPC also faces issues that are becoming problems among the voting polities of Western democracies.  Among the more significant of these is the increasingly large portion of the group that are aging. In China, almost 15 million CPC members were retired, but only 2.3 million members were students. Close to 20 million CPC members were older than 60 years of age. Those numbers ought to cause some worry. It is likely necessary for those numbers to be reversed to maintain the effective leadership role for the CPC in the coming decades. While there is nothing wrong with a large number of aged members, and indeed, retired members provide stability and a connection with a vital past, the CPC cannot remain vigorous where its interests are skewed to meet the peculiar needs of the aged. To some extent the CPC appears to have been conscious of this, noting that about half of its members joined after the discrediting of the post Mao Zedong "Gang of Four" (四人帮). Also, about 18 million members were younger than 35.  And like large multi-ethnic states seeking to embrace gender equality, the CPC has a way to go.  Female CPC members are still less than 25% (almost 17 million members) and minorities  make up less than 7% of membership (5.13 members).

And, of course, the statistics do not answer a number of questions that will become more important as the CPC continues to mature as a governance institution.  The constitution of CPC membership in the western regions (自治区) merits special attention.  Failure to pay attention to the ethnic mix of membership, not merely at the cadre level but also in positions of authority may have lasting effects on the character of governance in the regions. The effects of corruption probes have been felt within the CPC apparatus as well as within state organs.  There were no statistics relating to the number of CPC members stripped of membership, the reasons for  removal from Party membership or the status of the cadre at the time of removal.   Lastly, the movement from pre- to post-revolutionary Party suggests that Party membership among the leadership economic enterprises might be as important as membership among functionaries within state organs.
Posted by Larry Catá Backer at 8/18/2010 09:35:00 PM