So begins the nearly one hundred page set of regulations that are meant to provide a legal and regulatory framework for the potentially far reaching efforts to create a small sole proprietorship based private sector in Cuba just published in the Cuban Official Gazette.   Gaceta oficial de la República de Cuba Ministerio de Justicia, No. Gaceta: 012, Tipo de Edición: Extraordinaria Especial, Fecha: 2010-10-08, Pages 89-168.  The regulations may also be downloaded in pdf form here.
I have been following the potentially significant changes to the Cuban economy as the Raul Castro government seeks to carve out a space for small scale private sector.   Now at last, the government has issued the first of what are likely to be an increasingly reworked set of regulations for the taxation and containment of this new private sector.  The BBC has reported that


Several different taxes were created: a personal income tax ranging from 25 to 50 percent, a 10 percent sales tax, social security payments, and a payroll tax amounting to 25 percent of the salary paid to the employee.

"I would like to open a business in my home selling snacks and juice," a middle-aged woman with her copy of the Gazette under her arm commented to IPS. "But if on top of the cost of the licence, the sales tax, and I don't know what else, I have to buy whatever I need for the business at the prices of the 'shopin' (government stores that accept only hard currency), I don't see where the profit is."

The new system, which was first announced in mid-September, will expand the activities in which self-employment is allowed. In 2009, more than 140,000 people had licences to work on their own in Cuba, although many more do so without a permit.

Under the new legislation, small businesses will be able to hire employees other than relatives for the first time, and Cubans -- even citizens living abroad -- will be able to rent out entire houses, instead of just rooms.  Patricia Grogg, Cubans Queue Up for Copies of New Self-Employment Rules, IPS News Service, Oct. 26, 2010. 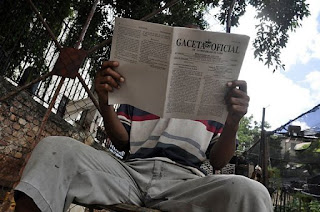 
"To rent out a room in my house, I have to pay 331 convertible pesos (357 dollars) a month, including the cost of the permit and other taxes that were gradually added on," a woman who lives in Havana's Playa neighbourhood told IPS. "Of course I also pay an annual personal income tax.

"Now I have to study this document carefully, and wait for the meeting that we will undoubtedly have with Housing Ministry authorities, to find out what we can expect," she said.

The rental business, along with small private family-run restaurants known as "paladares", are seen as the most flourishing areas of private enterprise in Cuba, despite the strict regulations to which they are subject.

The taxes will be paid in Cuban pesos. For the self-employed who do business in convertible pesos or "CUCs", the current exchange rate in the government exchange houses, where the CUC is worth 24 pesos, will apply.  Id.

Two things are worth noting here.  First, it is clear that the Cuban government is intent on controlling and closely managing this new private sector.  I have already suggested that one means to contain private activity is to deny it access to vehicles for aggregation of capital--particularly corporate form.  That remains available only to sate sector enterprises.   Second, it is likely that the regulations represent a first attempt at managing a new form of economy.  It is likely that the government will have to revisit its regulations as the economy begins to acquire shape.  Once  it becomes viable it will not be clear whether the state will be able to control this sector or whether this sector will control the state.  Either way, the Cuban people will acquire a greater stake in both the state and in their governance structure.  If the Cuban government can make this work they will go a long way to  achieving a measure of stability that may withstand the impact of Cuba's reentry into the conventional global economy.  Then the irony:  the most important achievement of the Cuban revolution--its education of the masses--may well provide the necessary base for the establishment of successful  entrepreneurship, and it may also equip these new private sector businesses with the sophistication necessary to strategically engage the new regulatory environment.  That may well provide the basis for the greatest change in the relationship between the people and the state apparatus.
Posted by Larry Catá Backer at 10/26/2010 10:17:00 PM