Today many civil society elements will be celebrating November 20th as the National Day of Black Consciousness in Brazil.   I happened to watch the street celebration of the event in Florianopolis, a city in the South of Brazil. 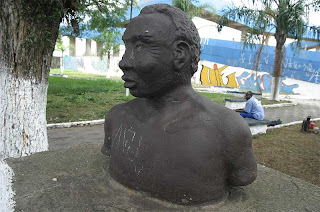 Zumbi sculpture.
This celebration, like those in the Caribbean, are built around historical figures that have come to symbolize resistance to subordination.  In the Caribbean, the Taíno Indian Hatuey has become a symbol of both indigenous resistance to European colonization, of resistance to religious chauvinism and of resistance to national subordination.  See, Larry Catá Backer,  From Hatuey to Che: Indigenous Cuba Without Indians and the U.N. Declaration on the Rights of Indigenous Peoples (March, 27 2009). American Indian Law Review, Vol. 33, 2009.
Afro-Brazilians celebrate Zumbi dos Palmares, who died resisting slavery in 1695. Under the banner "Valeu, Zumbi" Afro Brazilians marched in the streets of several cities.  Zumbi, they relate, dedicated his life to the fight against slavery, racism and discrimination ("Dedicou sua vida a la luta contra a escravidão, o racismo, o preconceito e a discriminação." 20 de novembro, Dia Nacional da Consciencia Negra, leaflet, Nov. 20, 2010). Zumbi was the last of the leaders of the great fugitive slave city of Quilombo dos Palmares.  Isolated from the rest of Brazil, it remained a refuge for fugitive slaves, Indians and some Europeans for almost all of the 17th century.   An interesting discussion of the Palmares Quilombro can be found at Aline Viera de Carvalho, Archeological Perspective of Palmares:  A Maroon Settlement in 17th Century Brazil, The African Diaspora Archeology Network (March 2007); Robert Nelson Anderson, "The Quilombo of Palmares: A New Overview of a Maroon State in Seventeenth Century Brazil," Journal of Latin American Studies 28:545-566 (1996) (Zumbi in the historical context of the leadership of the fugitive slave community).

As in the Caribbean, Zumbi incorporates the symbolic embodiment of difference and resistance in the service of integration within a society that is both singular and differentiated.  Its power is in the patterns of its symbolic history--subordination, resistance, the possibility of success, betrayal, martyrdom, and the transformation of the hero (Zumbi) from person to idea.  Like Hatuey in the Caribbean, Zumbi has become the site for a complex of ideas about the organization of social and political power within a society organized once on principles of formal subordination, now rejected as incompatible with its political values.  Zumbi becomes a symbol of nationality beyond race, yet conscious of race.  Zumbi becomes the idea under which a large number of civil society elements might coordinate somewhat disparate aims into something more unified.  But the movement from symbol to practice, from ideal to social values consensus is a slow and difficult.  The realization of this complex interplay between sameness and difference will to some extent determine the success of Brazil's ability to embrace its economic and social potential.
Posted by Larry Catá Backer at 11/20/2010 07:24:00 PM

Email ThisBlogThis!Share to TwitterShare to FacebookShare to Pinterest
Labels: Brazil, Law and Culture