First impressions are usually both important for setting foundations, but also ultimately wrong. Shanghai has the feel of the New York of three generation’s ago, with the atmosphere of Los Angeles a generation ago, the lights of contemporary Tokyo, drivers who appear to learn their craft in Buenos Aires, and a skyline that reminds one of New York in the 1970s. 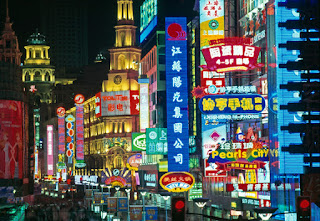 (Nanjing Lu, a famous and much visited commercial street, Shanghai, from China Your Way)
These comparisons and disjunctions, of a city that is itself and yet is made so in reflection of other places and times, sets the intellectual tone.

Conversations over a long day produced three insights that will be worth exploring further. The first touches on the one child policy. Here there is something like three frames of mind that are related but not necessarily consistent. First, the one child policy highlights the powerful effect of corruption as an important element in efforts for the government to retain legitimacy. Stories of money substituting for policy limits tends to make people focus on the unfairness, not necessarily of the corrupt officials, but of the system that permits these officials to continue to act without sanction. Second, and related, is the notion of arbitrariness in the system. People understand that young couples who journey to graduate school outside China can have as many children as they like while abroad without sanction. People also believe that high state functionaries tend to take advantage of these rules, leaving poor folks to bear the burden. The third is that, while the policy might have been beneficial in controlling population and triggering growth and prosperity, the policy, unless managed differently, is unsustainable. A state with a demographically inverted population—more old than young people—is not one that can either produce greater wealth or sustain income transfers to the old in the form of care. Fourth, there is a political and social concern—population is destiny and shapes national identity. With shrinking population of younger people then necessary jobs will have to be undertaken by available youth, generally from regions unburdened by a one child policy. They have seen that, when merged with the core principle of mass democracy at the foundation of legitimate political systems, it suggests that one child policies in the face of greater need is a formula for cultural and ethnic suicide, shifting the ethnic and national character of the population.

The second proceeds form the first. Parents, and especially parents of one child households are far less willing to give their children up for military service, me specially for military service in wars of intervention. The policy efforts to instill a sense that every child is precious have succeeded all too well. If all children are precious, and if male children might be even more precious, then it might be that families will be less willing to tolerate military activities that may imperil their children. For a state like China may require more rather than less military personnel, this poses the sort of opposition which, in an extreme case, can bring a government down. The Soviet Union’s adventures in Afghanistan stand as a reminder (in a case where there was no government policy of reducing fertility). And yet the American solution also looms large—like them, the Chinese might be tempted to expand the use of technology in place of people (drones and targeted killings, unmanned weaponry and the like) and the bringing in of mercenaries and surrogates.

The third involves the future character of the Communist Party. What emerged in a host of conversations was a gentle questioning of the relevance of the Communist Party in an increasingly market driven China. First, Party member ship is not seen any more as an important choice for advancement outside the state sector (business and administration). Though the state sector remains quite large, it is no longer overwhelming. Second, there are questions about the ability of the CPC to become more internally relevant or to permit a greater level of democracy in the state sector. In that context, Jiang Zemin’s “Three Represents” (Sange Daibiao) theories have not had widespread effect. It is viewed as either far too opaque (that is no one can easily extract its meaning) and far too broad. That may be regrettable at least on the level of theory.  See, Larry Catá Backer, Chinese Constitutionalism, Sange Daibiao (the “Three Represents”), and the Rule of Law, Law at the End of the Day, May 16, 2006.  There is interest in the recent induction of one of China’s richest people into the Party, but one billionaire Communist Party member does not make a solid a diffuse and institutionalized membership make. Moreover, Hu Jintao’s move from Sange Daibiao to scientific development, though derived from the later works of Deng, have tended to take attention from any effort to solidify Sange Daibiao. Yet the recent Yet at the same time, there is a sense of the importance of the CPC as a stabilizing institution, and a willingness to concede political space to CPC members in return for greater internal democracy within the Party and better management of factors important to stability—principally corruption.


Fourth, a “specialist’s” insight, but one with great relevance for Chinese constitutionalism: the constitutional effect of the Preamble to the Chinese State Constitution. While there is some consensus among those with whom I spoke that the last paragraph of the preamble has constitutional effect, it is far less clear whether the rest of the Preamble has any effect. This is critically important to Chinese constitutionalism. The earlier paragraphs of the Preamble include the critical references to the leadership role of the Chinese Communist Party and to the fundamental ordering role of Marxist-Leninist and Mao Zedong Thought, Deng Xiaoping theory, and the important thought of Three Represents. To reduce the constitutional effect of these earlier paragraphs suggests a means of reducing the influence of Party and Ideology as well—especially within the structures of the administrative apparatus created through the State Council and NCP architectures. Or, according to some, it means that the constitutional significance of both Party and ideology ought not to be found in the State Constitution but is to be found elsewhere. That is a subject to be taken up later.
Posted by Larry Catá Backer at 10/30/2011 02:13:00 AM