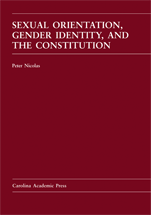 One of the most contentious issues for corporate social responsibility is that of the protection of women and sexual minorities. E.g., International Council on Human Rights POlicy, Sexuality and Human Rights – Discussion Paper - The ICHRP (2009) ("On a number of issues, rights activists differ in their views: the disputes between them defy attempts to formulate simple standards or conditions for legitimate sexual activity." Ibid., 32); UNESCO Bangkok, Human rights protections for sexual minorities in insular Southeast Asia (2011). The issues involved serve as a nexus point for the sometimes quite irreconcilable governance frameworks of states, international organizations, organized religions, deeply held ethnic and cultural views and the realities of local practice. At the same time, it is becoming clear that, however defined, there is emerging a movement, if not a consensus, toward the acceptance of some minimal level of protection for the rights of women and sexual minorities in the construction of international soft law frameworks for business and human rights. Yet this movement must be understood against the background of local law and practice, and especially of the public law of states within which many of the most powerful multinational corporate actors are organized.

Among the most interesting, and increasingly traditional, is the United States. The increasing tendency within the United States to reject emerging trends at the international level or to bend them to the peculiarities of U.S. cultures and practice, can serve as the legal basis for corporate culture that radiates out from the home offices of U.S. multinational corporations through its supply chain relationships, even those otherwise grounded in international CSR frameworks. My colleague, Peter Nicolas, has produced an excellent casebook that gets at the legal cultural roots of the U.S. approach to issues of protection for sexual minorities that is worth a close look, Peter Nicolas, Sexual Orientation, Gender Identity, and the Constitution (Carolina Academic Press, 2012) ISBN-13: 978-1-59460-991-6 (630 pp).

Here is the announcement from Carolina Academic Press:


In this textbook, Professor Nicolas incorporates his expertise in constitutional law, federal courts, and sexual orientation, gender identity, and the law to provide a comprehensive approach to studying constitutional litigation involving the rights of sexual minorities.

The book first addresses threshold questions regarding the definitions of sexual orientation, sex, and gender, setting the stage for the question of “immutability” and the status-conduct and speech-conduct lines that arise in the substantive materials that follow. Next, it addresses procedural obstacles that play an increasingly prominent role in constitutional litigation involving the rights of sexual minorities, such as standing, mootness, abstention, and the precedential weight of summary affirmances by the U.S. Supreme Court. Finally, it examines the key constitutional doctrines that arise in litigation regarding the rights of sexual minorities—substantive due process, equal protection, and First Amendment—in a variety of contexts, such as marriage, parenting, and public employment. The book thus replicates the stages of analysis that arise when litigating any such case from start to finish.