Dehumanization and Control: Essay by Melissa Tatum and Jennifer Hendry: "Not a Gorilla; Not an Emblem" 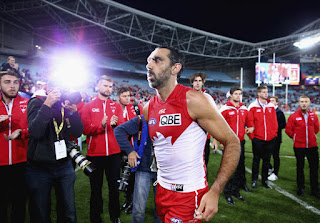 It has been something of a commonplace to essentialize marginalized people as animals.

Animalisation and even bacterialisation are widespread elements of racist dehumanisation. They are closely related to the labelling of others with the language of contamination and disease. Images that put men on a level with rats carrying epidemic plagues were part of the ideological escort of anti-Jewish and anti-Chinese racism. . . . To throw bananas in front of black sportspeople is a common racist provocation even today. (Comparing black people to monkeys has a long, dark simian history, The Conversation Feb. 28, 2016).

This is a global phenomenon. Adam Clarke has written for Buzzfeed on the recent animalization of indigenous people in Australia. "Aboriginal AFL player Adam Goodes was infamously called a gorilla by a 13-year-old girl during a game last year, prompting him to take a stand against racism in Australia. That led to relentless booing and racial abuse that saw him retire early." (Adam Clarke, Facebook Memes Compare Aboriginal Athlete To Gorilla That Was Fatally Shot, BuzzFeed, June 2, 2016).  This was recently made worse by the circulation of two memes juxtaposing Goodes to Harambe — the gorilla shot and killed in a US zoo this week (Ibid).

My colleagues, Melissa Tatum, Research Professor of Law at the University of Arizona, and Jennifer Hendry, a Lecturer in Jurisprudence at the University of Leeds School of Law, have taken on this issue.  Their essay, Not a Gorilla. Not an Emblem, expertly weaves together the strands of racism, racialized nationalism, exploitative appropriation, and social control that these impulses continue to represent.  It is presented below.