Rules and Reality--On the Importance of Method as Governance: The Example of Airline Reimbursement Rules

I have recently suggested the importance of toolboxes and the methodologies of standards implementation as a source of governance in their own right.  I have focused on surveillance methodologies.  Larry Catá Backer, Global Panopticism: States, Corporations and the Governance Effects of Monitoring Regimes. Indiana Journal of Global Legal Studies, Vol. 15, 2007. But I have also noted the importance of implementation rules and their substantive effects.    Larry Catá Backer, “Welfare Reform at the Limit: An Essay on the Futility of ‘Ending Welfare as We Know It,’” 30 Harvard Civil Rights-Civil Liberties Law Review 339 (1995). 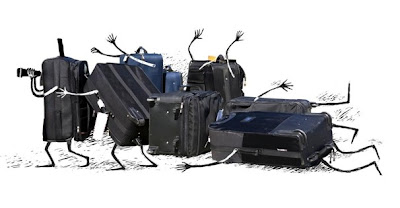 (From Christopher Elliott, The Navigator: How the airlines handle the ‘mishandled’ luggage problem, The Washington Post, July 31, 2011.)

Almost on cue, Christopher Elliott, the National Geographic Traveler Magazine reader advocate published a column providing an important example of the ways in which implementation, and the rules developed for that purpose, can effectively change and sometimes undo, the standards which these purport to apply.  Christopher Elliott, The Navigator: How the airlines handle the ‘mishandled’ luggage problem, The Washington Post, July 31, 2011.


Effective Aug. 23, new rules will require airlines to refund any fee for checked luggage if the bag is lost. However, the current requirements for compensating passengers for reasonable expenses won’t change, nor will the maximum compensation for lost luggage.
How do airlines persuade us to accept less? They ask for original receipts that they know we don’t have. They claim that they don’t cover fragile items, such as electronics and collectibles. They take forever to process our claims, dragging things out for so long that we forget what we lost.
For the past three years, checked luggage has been a huge profitmaker for air carriers. The industry collected more than $3 billion in baggage fees in 2010, compared with just $464 million in 2007, the year before the legacy airlines adopted a fee for the first checked bag. And for three years, the industry has essentially had it both ways — collecting our money and then losing our luggage without any meaningful consequences. (Id.).

Mr. Elliott reminds us, both in the case of government regulation through law and standard setting in the emerging sectors of corporate social responsibility, including the human rights effects of business practice, that a focus on standard setting is glorious.  Much energy is spend on the elaboration of standards and their memorialization in the loftiest of instruments.  Standards and instruments are the stuff of media coverage and the royal road to fame and fortune for those stakeholders involved in their construction.  But real governance power is not confined to standards and the instruments  that house them.  Real governance is effectuated in the plain and usually hidden mechanics of getting from right to remedy.  The rules and processes through which this is accomplished requires tedious work, usually well out of the spotlight--and thus less interesting for those who prefer the fame and fortune of the limelight to the hard work of effective realization.  But the rewards, in terms of deploying governance power at the operational level, can be enormous.  My colleague at Penn State, Crystal Stryker, reminded me of the epic 2009 hit called “United Breaks Guitars” that describes the experience of one unlucky traveler trying to get reimbursed for a broken guitar.  In effect, standards serve as only a part of the business of governance;  implementation provides another.  In governance environments in which the effects of regulation can have electoral effect--aggrieved people vote and make consumption and investment decisions--a focus on this least visible part of governance might be useful for stakeholders.

Mr. Elliott wonders:  "Wouldn’t it be something if the government also set minimum compensation amounts for passengers whose luggage just went astray for a day or two? I wonder how it would affect the mishandled baggage tally — and how it would move the needle on the billions of dollars in luggage fees the airlines collect every year."  Christopher Elliott, The Navigator: How the airlines handle the ‘mishandled’ luggage problem, The Washington Post, July 31, 2011.  I suspect the answer would depend on the ability of the airlines to concoct a system of remedies that effectively discourages the vindication of rights. To accomplish this through an invocation of the bland language of process and standard methodologies, of cost effectiveness and the need to prevent fraud, is truly where regulatory power lies.