I have begun considering the nature of intra-Party discipline within the Chinese Communist Party and its relationship to issues of law and state power.  In Part I provided an introduction to the notion of Shuang gui in theory and practice.  See Larry Catá Backer,Communist Party and State Discipline in China: Exploring Shuang gui 双规 and Shuang kai Part I, Law at the End of the Day, Aug. 2, 2011.

In this Part II I provide a very brief introduction to Shuang kai, and its distinction from Shuang gui. The discussion is essentially descriptive and focuses on the formal organization of Shuang kai, and is preliminary and tentative. The materials were prepared by my research assistant GAO Shan. 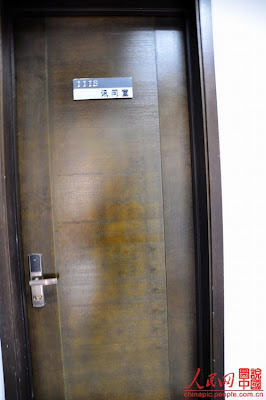 Brief introduction of Shuang kai and pictures inside Shuang gui facility
GAO Shan
Table of content
Overview of the article
1.     What is Shuang kai?
2.     The general procedural of Shuang kai
a.     Procedural of removing  from the Party posts and expulsion from the party
3.     Who shall subject to the punishment of expulsion from the Party?
a.     Three cases that subject to this punishment
b.      Effect of expulsion
4.     Removal from the Party’s posts
a.     What are Party’s posts?
b.     The removal decision’s requirement
c.     The effect of removal
Secret interrogation place: the Shuang gui facility

Overview of the article
This article will give reader general information about Shuang kai, which includes: what is Shuang kai? Who subject to it? What’s the procedural of the Shuang kai punishments and its future effect? After this introduction, I also providing some pictures that introducing the secrete facility for Shuang gui investigation.
1.     What is Shuang kai?
People frequently heard the word Shuang gui and Shuang kai together. Actually, Shuang gui is an special measurement of investigation and Shuang kai is the CPC discipline punishment. According to the article 10 of CPC’s regulation on the discipline, there are five different kinds of punishments, including:
·       (1)Warning; (2) severe warning; (3) removal from the Party posts; (4) probation within the party ; (5) expulsion from the Party
Thus, punishment (3) removal from the party posts [Kai chu dang neizhu wu 开除党内职务] and (5) expulsion from the party [Kai chu dang ji 开除党籍] are the punishments of Shuang kai that medias talking about.

4.     Removal from the Party’s posts
a.     What are Party’s posts?
Party’s posts are generally means leader positions that must under party’s election or party organ’s appointment.  Such leader position including: CPC committee member in all levels, CPC standing committee member, secretary, deputy secretary and members of CDI at all levels, members of CDI committee, the secretary or deputy secretary. This punishment is necessary for members who’s malpractice is serious enough to cease his party duty but not serious enough for a period of probation within the party.
b.     The removal decision’s requirement
The punishment decision shall be specific when that person is under dual leader duty. The decision shall clearly state whether all the positions or one of the positions should be remove.  The removal shall starts with the higher position to the lower position. CPC can also suggest the non-CPC institution remove that person’s position.
c.     The effect of removal
Within two years of the punishment, that person shall not get any recommendations or take the position which is higher or equal to the one that were removed before.

Interrogation place: the Shuang gui facility
Low profile and discrete is the reason why Shuang gui is an efficient investigation measurement. In my last article the introduction of Shuang gui, I mentioned that people who is subject to Shuang gui investigation always being taken to a undisclosed place for the inquiry. Usually such place is a hotel room or a resort.  Sometimes, the authority may even construct a facility especially for Shuang gui investigation. From a Chinese journalist blog, we have a chance to explore the inside of Shuang gui facility.
According to his blog, he called Shuang gui facility as “Base”. The base is located at an unknown rural and isolated mountainous area. The gate of this facility is guarded by armed polices. He also mentioned in the blog that the staff members of the base told him that they had witnessed all kinds of indecent reactions of the officials who are being “invited” here for investigation. No more than 3 days, they all confess everything.

Below are some pictures of this facility:
1.     The gate, you have to pass security check. 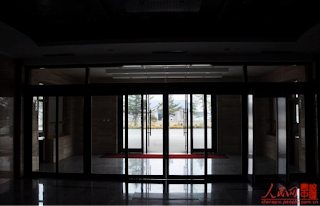 2.     One of the interrogation rooms. If people is asked to come to this room, that means there are solid evidence for his illegal conducts or malpractices.
The first pic is the seat of interrogator, you can notice there is a camera and a screen; the second pic shows you the investgatee’s seat, which is apparently lower than the interrogator. Also he cannot aware the passing of the time because the clock is behind him. 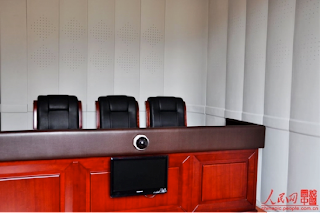 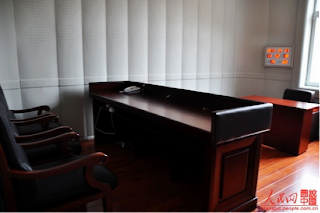 3.     The inquiry room, the arrangement of the seat in this room is much different. The wall is also covered by soft material to avoid any accidents. Just like the AV equipments in well equipped Western Universities, the camera can automatically record of the conversions and make copies of it.
Special designed window with protective bar, outside is isolated deserted mountains. 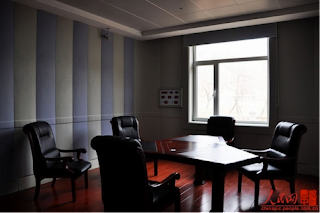 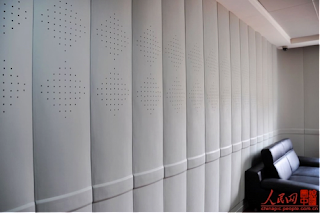 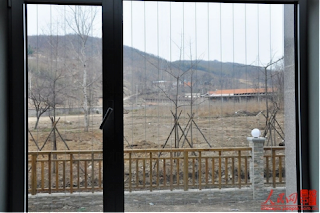 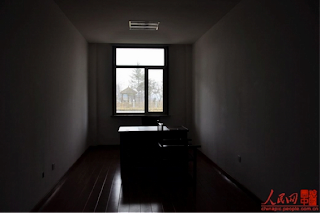 5.     Command room, equipped with big screen that can exam the details of each rooms in this Base. 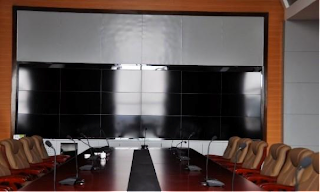 The pic and content of this part is retrieved from: http://www.010nc.com/news6262.htm (Chinese)
http://www.duihuahrjournal.org/2011/07/official-fear-inside-shuanggui.html (English) from a post by Chinese blogger Chu Zhaoxian (储昭贤) (Where Corrupt Officials Fear Most: Exploring a Shuanggui Investigation Facility (揭秘中纪委双规贪官场所神秘面纱), Chu Zhaoxian, April 28, 2011)