Nichola Gutgold blogs at TalkDoc. Her books include Almost Madam President: Why Hillary Clinton ‘Won’ in 2008 , Seen and Heard: The Women of Television News, and Paving the Way for Madam President. With Molly Wertheimer she co-authored, Elizabeth Hanford Dole: Speaking from the Heart. This essay is from her forthcoming book on communications styles of the women Supreme Court Justices: The Rhetoric of Supreme Court Women: From Obstacles to Options (forthcoming Lexington Books, 2012).

Armed with her Stanford law degree in 1952 Sandra Day O’Connor discovered that no law firm in California wanted to hire her. Just one firm offered her a position as a legal secretary. Ironically, a senior partner of that firm, William French Smith, helped O'Connor's nomination to the Supreme Court years later as the Attorney General. Failing to find suitable work in private practice, O'Connor turned to public service. Years later, upon her nomination to the Supreme Court, President Reagan tried to ease the public’s mind about the first woman by assuring everyone that she was “a person for all seasons” and of good “temperament.” In her most often quoted speech, she warns: “This ‘New Feminism’ is interesting, but troubling, precisely because it so nearly echoes the Victorian myth of the ‘True Woman’ that kept women out of law for so long. It is a little chilling to compare these suggestions to Clarence Darrow’s assertion that women are too kind and warm-hearted to be shining lights at the bar.”

In 1991 she gained a sister on the court in Ruth Bader Ginsburg, by then already an historical figure for her spellbinding Supreme Court advocacy on behalf of the ACLU. Ginsburg noted that when she made her arguments in the 1970s to the Supreme Court, it was comprised of “men of a certain age” who needed to be “kept in good humor” so she appealed to their personal side by reminding them of their wives, sisters and daughters as she argued for gender equality. Ginsburg’s life’s work is the rhetoric of enactment as she broke down barriers for women and argued for new laws that would allow men and women to avoid stereotypes.

Eighteen years would pass until another woman, Sonia Sotomayor would be appointed and in just a year another woman, the academic and political powerhouse, Elena Kagan would take her seat. In that span of almost two decades, women’s options opened up in America and the change is evident in the rhetoric of the two newest members. For Sotomayor, her Latina heritage, more than her gender takes center stage in her speeches. Unlike previous newcomers to the Supreme Court, Sonia Sotomayor has spoken often and passionately since her appointment. In her speeches she repeats the themes of ethnic pride, education and pro bono work and her eagerness to share her own inspiring biography combine to offer a moving message of an American dream realized.

Elena Kagan writes and speaks with an eloquence and natural humor uncharacteristic in modern communicators. In her only speech as justice she urged the graduates of University of New Mexico School of Law to “do what you think matters.” Speaking as though she were in a college lecture hall, she remarked: “This profession is one in which you can make an enormous difference in the lives of individuals and the welfare of society as a whole.” Quoting Thomas Jefferson, she said, “There is a debt of service due from every man to his country proportioned to the bounties which nature and fortune have measured him.” Like Sotomayor, she urges her audience to give back. Sotomayor and Kagan’s speeches do not focus on gender; instead they focus on the quality of the work that can be done as a lawyer and the tremendous difference it can make in society. The rhetoric of the women of the Supreme Court has shifted from a focus on obstacles to include greater rhetorical options, a sure sign of progress for all of us. 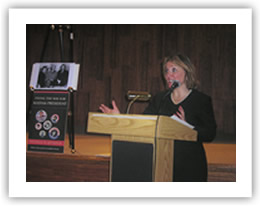