Transparency International 2013 Global Corruption Barometer: The State of Corruption and the Legitimacy of Public and Private Actors

Transparency International has released its latest Global Corruption Barometer, drawing on a survey of more than 114,000 respondents in 107 countries. 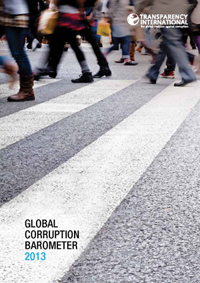 
The Recommendations (Report Section 1.2)) suggest much about the state of democratic legitimacy in general, and the state of the legitimacy of public and private actors in particular:  (1) make integrity and trust the founding principles of institutions and services; (2) bring back the rule of law; (3) hold the corrupt to account; (4) clean up democratic processes; (5) give people the tools and protections to fight against corruption. Taken together, these recommendations suggest that, indeed, public institutions may be incapable enough of of policing themselves that their efforts to police their public loses sufficient credibility that the legitimacy of the state itself may, in extreme cases, be imperiled.  Yet Transparency International, like many NGOs, may fail to see entirely the consequences of its findings. The recommendations of the Report are made to governments.  But it is clear that governments cannot manage themselves.    In this environment, it is clear to see why private systems fo governance, and transnational standards now provide increasingly valuable alternatives to the regulatory systems of states. (e.g., Backer, Larry Catá, The Structure of Global Law: Fracture, Fluidity, Permeability, and Polycentricity (July 1, 2012). CPE Working Paper No. 2012-7; Penn State Law Research Paper No. 15-2012).

Berlin, 9 July 2013 – More than one person in two thinks corruption has worsened in the last two years, according to the world’s largest public opinion survey on corruption from Transparency International, but survey participants also firmly believe they can make a difference and have the will to take action against graft.

The Global Corruption Barometer 2013 is a survey of 114,000 people in 107 countries and it shows corruption is widespread. 27 per cent of respondents have paid a bribe when accessing public services and institutions in the last 12 months, revealing no improvement from previous surveys.

Still, nearly 9 out of 10 people surveyed said they would act against corruption and two-thirds of those who were asked to pay a bribe had refused, suggesting that governments, civil society and the business sector need to do more to engage people in thwarting corruption.

“Bribe paying levels remain very high worldwide, but people believe they have the power to stop corruption and the number of those willing to combat the abuse of power, secret dealings and bribery is significant, “ said Huguette Labelle, the Chair of Transparency International.

“Governments need to take this cry against corruption from their citizenry seriously and respond with concrete action to elevate transparency and accountability,” Labelle said. “Strong leadership is needed from the G20 governments in particular. In the 17 countries surveyed in the G20, 59 per cent of respondents said their government is not doing a good job at fighting corruption.”

Politicians themselves have much to do to regain trust. The Global Corruption Barometer 2013 shows a crisis of trust in politics and real concern about the capacity of those institutions responsible for bringing criminals to justice. In 51 countries around the world political parties are seen as the most corrupt institution. 55 per cent of respondents think government is run by special interests.

Politicians can lead by example by publishing asset declarations for themselves and their immediate family. Political parties and individual candidates, meanwhile, must disclose where they get their money from to make clear who funds them and to reveal potential conflicts of interest.

Around the world, people’s appraisal of their leaders’ efforts to stop corruption is worse than before the financial crisis began in 2008, when 31 per cent said their government’s efforts to fight corruption were effective. This year it fell to 22 per cent.

“Governments need to make sure that there are strong, independent and well-resourced institutions to prevent and redress corruption. Too many people are harmed when these core institutions and basic services are undermined by the scourge of corruption,” Labelle added.

The findings were quite interesting:

Bribery is widespread
Overall, more than one in four people (27 per cent) report having paid a bribe in the last 12 months when interacting with key public institutions and services.

Public institutions entrusted to protect people suffer the worst levels of bribery
Among the eight services evaluated, the police and the judiciary are seen as the two most bribery- prone. An estimated 31 per cent of people who came into contact with the police report having paid a bribe. For those interacting with the judiciary, the share is 24 per cent.

Governments are not thought to be doing enough to hold the corrupt to account
The majority of people around the world believe that their government is ineffective at fighting corruption and corruption in their country is getting worse.

The democratic pillars of societies are viewed as the most corrupt
Around the world, political parties, the driving force of democracies, are perceived to be the most corrupt institution.

Personal connections are seen as corrupting the public administration
People surveyed regard corruption in their country as more than just paying bribes: almost two out of  three people believe that personal contacts and relationships help to get things done in the public sector in their country.

Powerful groups rather than the public good are judged to be driving government actions
More than one in two people (54 per cent) think their government is largely or entirely run by groups acting in their own interests rather than for the benefit of the citizens.

People state they are ready to change this status-quo
Nearly 9 in 10 surveyed say they would act against corruption. The majority of people said that they would be willing to speak up and report an incident of corruption. Two-thirds of those asked to pay a bribe say they refused.