Sara Seck on "Kiobel and the E-word: Reflections on Transnational Environmental Responsibility in an Interconnected World" 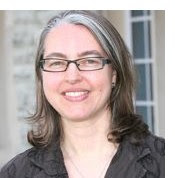 Professor Seck has recently been considering ramifications of