Joel Slawotsky: "Corporate liability for violating international law under The Alien Tort Statute: The corporation through the lens of globalization and privatization"

Joel Slawotsky, of the Radzyner School of Law, Interdisciplinary Center, Herzliya, Israel, and the Law and Business Schools of the College of Management, Rishon LeZion, Israel has written an excellent research article: Joel Slawotsky. (2013). Corporate liability for violating international law under The Alien Tort Statute: The corporation through the lens of globalization and privatization. International Review of Law: Vol. 2013 2, 6, published online: 10 Jul 2013. 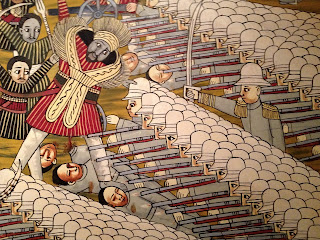 (Pix (c) Larry Catá Backer 2013)
He considers ramifications of Kiobel v Royal Dutch Petroleum 569 U. S. ____ (2013) and concludes: "Under the no corporate liability view, sovereigns can outsource misconduct and escape liability. To prevent corporate liability would constitute a tantalizing incentive to engage in misconduct with the peace of mind no legal consequences will arise"  This is an important insight with significant ramifications.
The article may be accessed online HEREhttp://www.qscience.com/doi/pdfplus/10.5339/irl.2013.6. The abstract follows.


Joel Slawotsky. (2013). Corporate liability for violating international law under The Alien Tort Statute: The corporation through the lens of globalization and privatization. International Review of Law: Vol. 2013 2, 6

The article addresses the question of whether the changing roles of “public actor” states and “private actor” corporations should impact the legal liability of corporations in international law. The classical paradigm viewed international law as the interactions between sovereign nations and thus was viewed as encompassing the rights and duties of states who were the exclusive subjects of international law. However, does this historical distinction remain relevant in our world today? The context of Alien Tort Statute (“ATS”) litigation provides an excellent vehicle to examine the issue. The objection to corporate liability under the ATS stems from the dichotomy between public state and private actors. Corporate liability opponents argue that international law involves the relationships between states, or between states and individuals, as opposed to the relationship between juridical entities such as corporations and individuals. Prior academic commentary (as well as some judicial rulings) attempted to bridge the “liability gap” by arguing that since private individuals may have liability for certain jus cogens violations, corporations as exemplars of “individuals”, should also have liability. Rather than comparing corporations to private individuals, this Article argues that global corporations can and should be compared to public actor states. Several developments militate strongly in favor of corporate liability. One, the financial power and influence global corporations wield over an individual rivals that of states. Large global corporations now have the ability to cause widespread damage, a power traditionally held only by states, thus eviscerating the distinction between global corporations and states. Two, the line of demarcation between states and corporations has been greatly reduced in recent years as the role and functions of states and private actors have become interchangeable. In recent years private actors have increasingly assumed public roles as states have outsourced public functions and services to private parties. Moreover, the line is further blurred because in a parallel development, state actors are now engaged as private actors through the operation of sovereign wealth funds and state-owned enterprises. The Article discusses these developments and argues that any objection to corporate liability based upon the distinction between states and corporations should be updated to reflect the blurring of the distinction between “public” and “private” actors. If large global corporations can be treated as actors similar to sovereigns, corporations should have similar duties and responsibilities towards the public as a state government.