On August 27, 2013, CCTV reported on its evening news program that Xi Jinping held Central Committee Politburo meeting and decided to hold a Third plenary meeting of 18th Central Committee of the Chinese Communist Party (CPC) in the coming November. The Aug 27th meeting was also meant to set the basic tone of these meetings: “Deepening Reform and establishing and perfecting Anti-Corruption and Punishment system.” As the picture below indicates, there are six areas of topics that have been planned for the discussions of the upcoming meeting: 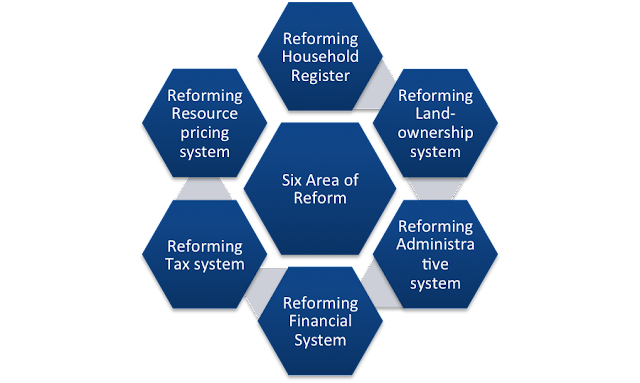 
The news release spent a good part of its report discussing the Reforms; the rest was devoted to the issue of the reform of the government administrative system and anti-corruption efforts. The news release devoted only one paragraph to the Shanghai Free Trade Zone. The news release used several strong words to highlight or emphasize the importance of these reforms. Particularly noteworthy were these:

“Reform and Open (referring Deng’s open up and reform policy, Gaigekaifang[1]) is the pivot turning point for the fate of Chinese.”

“Reform only exists as a present tense not a perfect tense.”

“Reform is a critical path for China’s future.”

Apparently, the context here semi-openly pointed out the biggest challenges for reform are special interest groups who gained tremendous economic interests based on current political arrangements. It also referenced left-wing groups who would oppose the current reform trends.


Following the challenge of the reform, the news release focused on the second issue “Reforming Anti-Corruption and punishment system.” The most intriguing part about their discussion is the fact that they failed to center discussion of anti-corruption efforts on law or the legal system. They explained:

From such expression, it is quite certain that the Party does not intend to replace the current anti-corruption system one grounded in law or the legal system. Shuanggui appears to continue to play an increasingly important role and the CCP may be signalling that corruption will be treated as a political rather than a legal matter especially when it involves Party officials in whatever  capacity.  (See, e.g., Backer, Larry Catá and Wang, Keren, State and Party in the Scientific Development of a Legitimate Rule of Law Constitutional System in China: The Example of Laojiao and Shuanggui (June 1, 2013). Conference: Rule of Law with Chinese Characteristics, Vol. 2013, p. 101, 2013; Penn State Law Research Paper No. 26-2013). It is likely that the result will include vesting more authority in the Central Party Discipline and Inspection agency. One could also argue that they failed to empathize the role of justice system in Anti-Corruption because this is Party politburo meeting, which should not utilizing state agency to solve Party issues.


The next paragraph focused on anticipated reforms to the government administrative system, with a concentration in the development of the economy. Particularly important was the  expression of the Party's line. The original context goes:


“In order to transform the role of local government and deepening institutional reform, we need to uphold Socialist with Chinese characteristics, Deng Xiaoping theory, Three Representatives and Scientific development… ”

For some, the fact that in the discussion of the reform, the routine expression of the Constitutional baseline expression of foundational theory that left out the traditional reference to Ma Zedong Thought was startling.   This omission, though, is unlikely to indicate a fundamental change in the basic Party line.  Indeed, the recent efforts to scientifically develop the "mass line" suggests no intention to write Mao out of Chinese political ideology.


In the days after the news release, there appeared to be little reaction to this news by the general public and lay people. Regardless of the public reaction, many news articles highlighted the topic with words like “Great Reform” “Structural reform” “Great action for corruptions.” There was also news comparing the coming Third Plenary meeting of 18th Central Committee with the one 24 years ago. The picture below showed a newspaper with the title: 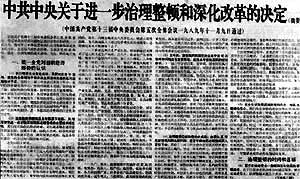 It is clear that in the run up to the Plenum, the CCP is seeking to foreshadow some substantial advances on the political work of the Party and its advancement of reform hinted at in the Report of the 198th Party Congress. It remains to be seen what form these reforms will take and what that reform suggests for the direction of the development of the political line in China and its connection to the further evolution of ASocilaist rule fo law and its political economy.


[2] Tiger and files are popular term adopted by the latest Anti-Corruption campaign and used to describe the level of the Party officials involved in corruption cases. It is designed to illustrate the Party’s determinative in fighting with corruption regardless the position and rank of the officials involved.
Posted by Larry Catá Backer at 9/09/2013 08:32:00 PM