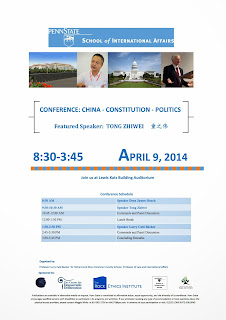 The Conference was recorded. Links to the video recording follow. The recording can be accessed in one of three ways. One is of the entire conference proceedings. The second is of the morning session; the third is of the afternoon session. For ease fo reference, the COnference announcement and Conference Program are also provided.

The Pennsylvania State University School of International Affairs is pleased to announce the Conference, “China-Constitution-Politics” to be held at the Penn State Law School, University Park, April 9, 2014. The conference is co sponsored by the Coalition for Peace & Ethics and Penn State’s Center for Global Studies, Center for Democratic Deliberation, Rock Ethics Institute, School of International Affairs.

Despite increasing economic ties between world's two largest economies, the United States' strategic and diplomatic engagement with China is implicated by the ideological presupposition that the Chinese political system is intrinsically "undemocratic" and lacks legitimacy. This of course would in turn invite Beijing to interpret Washington's actions with a fixed suspicious lens. Therefore, it is crucial to promote substantive legal dialogue and further mutual understandings of the each other's legal and political systems in order to maintain the long the term constructive relationship between the two nations.

China has adopted a written-constitution system. The Chinese Constitution not only reflects the most crucial values that are followed by the nation and its people, it is also a fundamental law with which people who actually rule the nation are determined to comply. Since the “Reform and Open up to the Outside World,” China has modified its Constitution four times since the establishment of the People's Republic and shifted from a planned economy to a Socialist Market Economy from 1993. China's constitution has also added protection of human rights, and rule of law governance. Though the Constitution does not specify the power or organization of the Chinese Communist Party, the CCP has consistently been the primary engine that calls for modifications and implementation of the Constitution.

But are these criticisms inevitably correct in general and wholly applicable in the post 1989 Chinese context? Put another way, is it possible to theorize a state-party model of state organization that remains true both to the ideals of constitutionalism grounded in the core postulate of rule of law governance and to the Marxist principles under which the Chinese state is organized and through which it is governed? Chinese constitutional scholars, on the other hand, have been building on emerging global notions of constitutionalism to both embed their constitutional experiment within these larger currents and to theorize the distinctions between the Chinese and other models. If the development of such a model is possible, what does that mean for purposes of implementing a rule of law society in China and how does that translate into the relationship among the people, the Party and the state?

The questions, and the dialogue they produce reminds us that great states, like the United State and China, share a common tradition of always seeking to review and improve their constitutional systems, though the roads taken by these two great powers to that end do not always coincide. China's political system is founded on the unique role of the Chinese Communist Party, not a party in the traditional sense, but the group of individuals who are vested with the political direction of the state. China is beginning to develop a quite distinct approach to democracy and democratic institutions--Chinese democratic socialism--that reflects a quite distinctive approach to the issues of popular engagement with politics, and that is grounded on this distinctive role of the CCP. Its political and constitutional choices, however compatible they may be with those of Western democracies, will likely have greater influence globally as China assumes a larger role in international affairs.