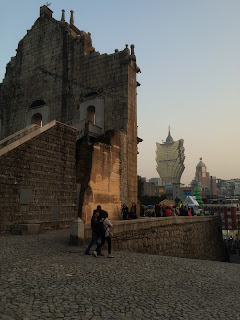 China continues to develop its constitutional relationship with its special administrative zones--principally Hong Kong and Macao.  These serve as the laboratory for the development of a sustainable one country two systems policy.  The exploration continues.  Recently, Chinese officials began a more sustained exploration of the Portuguese system for administering its autonomous regions. Raquel Carvalho and Kathy Gao, "Beijing chairman of Hong Kong's basic law committee takes a look at Portuguese democracy: Li Fei visits sunshine isle of Madeira to find out how autonomous regions that elect their own legislatures work with the Lisbon government," South China Morning Post (Dec. 6, 2015) ("In a week that has seen a former top Hong Kong judge call for discussions to start on the SAR's post-one country, two systems future, the Sunday Morning Post has learned that Li, secretary general of the National People's Congress Standing Committee and chairman of the Hong Kong Basic Law Committee, was on a mission to find out how two tiny autonomous regions relate to Portugal's central authorities in Lisbon.").

Indeed, it "is uncertain to what degree Beijing could replicate Madeira’s model of governance in Hong Kong or Macau. However, an examination of the constitutional differences between the PARs and SARs may shed more light on a possible constitutional revision." Scholars ask if Beijing will adopt Madeira-style rule for SARs, Macao Daily Times, December 15, 2015 ("Wang Yu, an associate professor at the One Country Two Systems Research Centre at the Macau Polytechnic Institute, said that Li’s visit signals Beijing’s possible intentions to “use [Portugal’s] system as a reference for ‘one country, two systems’.”").

Jason Buhi, who has focused his research on Maco's constitutional situation, has recently produced a thoughtful essay on the current exploration of the "Portuguese Model" and its relevance to the development of China's constitutional One country two systems policy. He suggests that the constitutional status of the Azores and Madeira, Portugal’s ‘ultraperipheries’, can be a fruitful source of comparisons and contrasts for Hong Kong and Macau’s relationship with Beijing.

The essay, which appeared recently in the South China Morning Post as  Jason Buhi, What Hong Kong and Macau can learn from Portuguese autonomous regions, South China Morning Post, December 12, 2015 (Comment/Insight/Opinion), follows.  Jason Buhi is a member of the Maryland (US) Bar Association, a PhD candidate at the University of Hong Kong, and lecturer at Peking University School of Transnational Law in Shenzhen.

The Portuguese influence on Hong Kong is deeper than generally known. Portuguese traders and missionaries transformed Macau into the locus of East-West intercourse three centuries before Hong Kong was colonised. The British officers who led that operation (and the Portuguese clerks who aided them) departed Macau in 1841. In 1985, the Hong Kong Legislative Council adopted functional representation based on a model practised in metropolitan Portugal since 1933 – a legacy that remains to this day.

This week, we learned that a delegation led by Li Fei, chairman of the Basic Law Committee, visited Portugal to investigate how Lisbon manages its two “ultraperipheral” autonomous regions: the Azores and Madeira. This raises the question what form the autonomy of those two jurisdictions takes, and what the constitutional implications could be for China’s special administrative regions. The answer presents both rich opportunities and challenges.

First, the two Portuguese autonomous regions (PARs) are recognised in the constitution, and their rights are spelt out there rather than in separate Basic Laws. This grants them some permanency in that their privileges can only be extinguished via a burdensome constitutional amendment process. Nonetheless, neither has the right to directly participate in any constitutional revision. Although Hong Kong and Macau are not specifically named in the 1982 Chinese Constitution, they do enjoy the protection of two bilateral treaties (the Sino-British and Portuguese joint declarations, respectively) and the basic laws, which insure another 30-odd years of autonomy. Portugal, on the other hand, has ratified the International Covenant on Civil and Political Rights, guaranteeing fundamental rights protected by the UN with no expiration date.

Second, although their legislative assemblies are elected by universal suffrage, the PARs’ autonomous legislative power is weak. While their legislators are elected once every four years via a popular vote tempered by party-list proportional representation, they enjoy only a “partially exclusive responsibility” to legislate in areas not foreclosed by the national assembly. Unlike the list of national laws that apply to Hong Kong and Macau in the annexes of their basic laws, the list of competencies reserved exclusively to Lisbon in Article 164 of the constitution is quite long. It includes jurisdiction over criminal, monetary and fiscal laws. Although Hong Kong and Macau’s legislatures are still hamstrung by archaic functional representation, they enjoy a significantly broader substantive sphere of legislative matters not reserved to the sovereign.

Third, the executive authority reserved to Lisbon is a wild card that depends on the personality of the Portuguese president. Each PAR is assigned a “representative of the republic” that serves at the discretion of the president for as long as he or she holds office. The constitution does not impose a reverse obligation for that officer to defend the interests of the locality, but does give him a veto over local legislation. This arrangement would present other challenges in that the president may directly dissolve the legislative assemblies after ill-defined local consultations, an extreme act our local chief executives can only take after a nasty legislative showdown. Although the bar is high, we also enjoy formal, codified procedures for impeachment proceedings and the mandatory resignation of a chief executive under extraordinary circumstances.

Fourth, the PARs enjoy no independent judicial power; they are part of the Portuguese judicial system and subject to the nation’s Constitutional Court. The independent judiciaries of Hong Kong and Macau, meanwhile, instill confidence in local autonomy. Fifth, the Portuguese autonomous regions are tightly under the economic control of Lisbon. The rules governing their finances and monetary policy are expressly within the purview of the national assembly. Hong Kong and Macau, meanwhile, enjoy independent tax, customs, fiscal and monetary policies.

As the Azores and Madeira each have a population of roughly 250,000 and no notable industry, it is understandable that Portugal would be hesitant to create a more distinctive status for them.

It is easy to assume why Beijing would be interested in the Portuguese model, but no international practice is suitable to be copied per se. If the PARs portend the shape of things to come, they foreshadow a grand bargain where Hong Kong and Macau finally receive universal suffrage legislatures in exchange for Beijing receiving enhanced executive authority and economic benefits. While this would be in keeping with the emphasis on economic base over political superstructure, it would come at the cost of lost local characteristics including the suspension of an independent judiciary. I, for one, remain confident Hong Kong and Macau will continue to enjoy a high degree of autonomy in their next constitutional iterations. To preserve our dynamism, let us do as we have always done: cherry-pick the best Portugal has to offer while staying true to local conditions.