Miguel Fraga, First Secretary at the Embassy of the Republic of Cuba in the U.S. Speaks at Penn State on "Cuba-US Relations: Current State of Affairs" 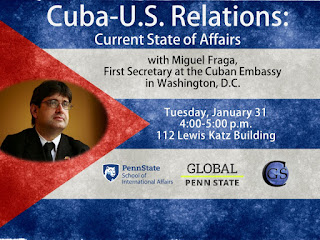 Miguel Fraga, First Secretary at the Embassy of the Republic of Cuba in Washington, D.C. since the re-establishment of diplomatic relations on July 2015, visited Penn State University Park campus to give a talk entitled “Cuba-US Relations: Current State of Affairs.”  The talk was co-sponsored by Global Penn State, the School of International Affairs and The Center for Global Studies and is free and open to the public. (See, e.g., here).

Mr. Fraga was appointed First Secretary in June 2015 to the then Cuban Interests Section. Since 2006 he has worked in the Ministry of Foreign Affairs in both the North American and U.S. divisions and the Office of the Minister. From 2008 to 2011 he served at the Cuban Embassy in Canada. Prior to that, from 2003 to 2008, Mr. Fraga was a member of the People's Power Provincial Assembly of the City of Havana which is the provincial parliament in Havana. He graduated from the University of Havana Faculty of Law, following in 2005 with a Master of Science in Foreign Relations from the Higher Institute of Foreign Relations “Raúl Roa García.”

The address by the First Secretary provides an important and lucid exposition of the Cuban perspective on our bilateral relations and their focus going forward. This post includes links to the recording of the talk as well as my summary observation of his excellent remarks. Stories about the event here, and here.  The Centre County Report news video on Mr. Fraga’s visit may be accessed here.