Announcing Symposium "On the Internationalization of the RMB: Risks and Challenges Ahead" Organized by the Queen Mary University of London Centre for Commercial Law Studies and the East China University of Political Science and Law 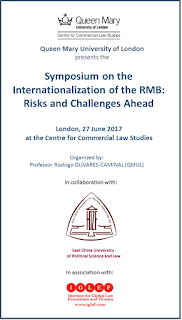 It is my great pleasure to announce an upcoming "Symposium On the Internationalization of the RMB: Risks and Challenges Ahead." The Symposium is presented by the Queen Mary University of London Centre for Commercial Law Studies in collaboration with the East China University of Political Science and Law, in association with the Institute for Global Law, Economics and Finance. It was organized by Professor Rodrigo Olivares-Caminal and takes place on 27 June 2017 at the Center for Commercial Law Studies.

Symposium on the Internationalization of the RMB: Risks and Challenges Ahead

The economic literature has underlined that an international currency is one that is used and held beyond the borders of the issuing country, not merely for transactions among the country’s residents but also, and importantly, for transactions among non-residents. Also, an international currency usually functions as a unit of account, a means of exchange and a store of value not only within but also outside the borders of the issuing country.

Usually, from a theoretical point of view, the benefits that a country can get by issuing an international currency are: (1) transaction cost reduction; (2) possibility for firms and financial institutions to issue bonds denominated in their own currency, which in turn can expand the country financial market and allow issuers to enjoy lower borrowing costs; (3) international seigniorage arising from the fact that the currency circulates abroad; and, (4) greater economic power of the country in the international context.

However, there are also certain costs associated with the internationalization of a currency, such as: (1) currency appreciation; (2) external constraints imposed on domestic monetary autonomy; and, (3) greater global policy responsibility.

Apart from the political implications that the Chinese Government will have to consider, in order to make the RMB a fully international currency, a number of legislative reforms. Therefore, the focus of the symposium would be on the legislative reforms impacting the financial system and the capital markets and how to address these reforms from the most efficient way to maximize the benefits and minimize any possible negative implications. The aspects on which the symposium will focus are:


(1) a complete liberalisation of inward and outward capital flows with the consequent free access of foreign institutions to the domestic markets;

(2) creation of a government and corporate bond market;

(3) increase in the number of private financial institutions; and, (4) reshaping of the banking and financial supervision.


These reforms need the adoption of an adequate and modern regulatory framework. From this point of view, the symposium aims at contributing to the legal and economic debate about the features of the Chinese financial regulation and supervisory structure of the next decades will have to have by providing some inputs towards its shaping. 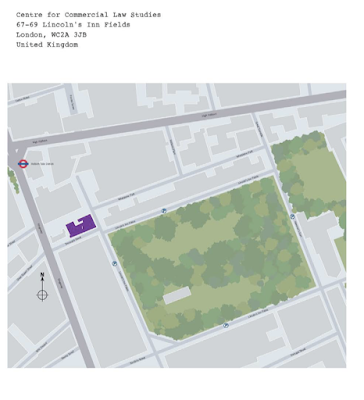