Congressional-Executive Commission on China Event: "Gagging the Lawyers: China’s Crackdown on Human Rights Lawyers and Its Implications for U.S.-China Relations" 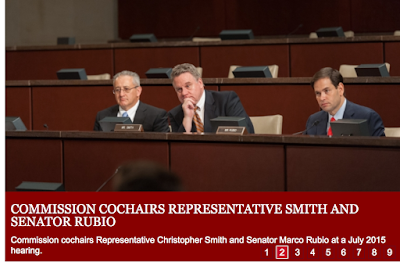 
The Congressional-Executive Commission on China was created by the U.S. Congress in 2000 "with the legislative mandate to monitor human rights and the development of the rule of law in China, and to submit an annual report to the President and the Congress. The Commission consists of nine Senators, nine Members of the House of Representatives, and five senior Administration officials appointed by the President." (CECC About). The CECC FAQs provide useful information about the CECC. See CECC Frequently Asked Questions. They have developed positions on a number of issues: Access to Justice; Civil Society;Commercial Rule of Law; Criminal Justice; Developments in Hong Kong and Macau ; The Environment ; Ethnic Minority Rights;Freedom of Expression; Freedom of Religion ; Freedom of Residence and Movement ; Human Trafficking ; Institutions of Democratic Governance ; North Korean Refugees in China; Population Planning ; Public Health ; Status of Women ; Tibet ; Worker Rights ; and Xinjiang.

CECC tends to serve as an excellent barometer of the thinking of political and academic elites in the United States about issues touching on China and the official American line developed in connection with those issues. As such it is an important source of information about the way official and academic sectors think about China. As one can imagine many of the positions of the CECC are critical of current Chinese policies and institutions (see, e.g., here, here, herehere, here, here, here, and here.

Recently, the CECC has announced hearings designed to highlight what it views as the un-American way in which China has been dealing with its lawyers, especially as they seek public venues to spotlight issues of potential administrative failures under the law in China. Those hearings, Gagging the Lawyers: China’s Crackdown on Human Rights Lawyers and Its Implications for U.S.-China Relations will be held at HVC-210 Capitol Visitor Center, Washington, DC 20515; Wednesday, June 28, 2017 - 2:00pm to 4:00pm.

Of course, the most interesting thing about these interventions is not its value for strengthening the U.S.'s own view of its own legal and political cultures.  After all, at its heart the hearings are really about this: how would these actions have been handled in an (idealized) American legal and political system.  And indeed, the most interesting question--and one hardly to be pursued, would be the comparative project. That would require the Committee to consider--dispassionately and rigorously, the political and legal consequences of such actions if undertaken in equivalent circumstances in the United States.   That might serve the useful purpose of highlighting the strengths and weaknesses of our own systems and also to suggest those points where systemic comparison spotlights incompatibility.  It is at that point that the most useful work can be undertaken: Given the differences in norms and structures, to what extent are the actions undertaken compatible with the (idealized and actual) law and norms of China. That analysis produces two important contributions to analysis.  The first is a deeper understanding of inter-systemic points of compatibility and contradiction.  The second is a clearer analysis of the contextual reasons why (without attacking the legitimacy of the underlying system) government policy might be in some respects inconsistent with its own ideology and perhaps, to some extent, with the basic line of the CCP.

But, of course, CECC, and those who serve it, are engaged in a political--not a scholarly--project.  To that extent its actions and production of materials serve as primary source research for knowledge production, rather than as the production of knowledge itself. That is not a bad thing.  Indeed, it ought to be welcome within the framework of the American political system as an expression of its own politics. It is also useful for indications of the state of U.S. Chinese political jousting as well as a hint of internal politics at the federal level of our system. And the content of the hearings will reveal more about the U.S. than it might about the objects of inquiry. With that in mind, one might more effectively approach both the hearing, its product and the already anticipated Chinese reaction (that, also ought to be analyzed in the same way for its own self-reflections and internal politics) for the overarching scholarly project of seeking truth from facts.

The Congressional-Executive Commission on China

Over the past four years, the Chinese government has carried out an extensive campaign to silence political dissent, curtail civil society, and ensure ideological loyalty to the Chinese Communist Party from various sectors of society, including business leaders, bloggers and social media users, university professors, and journalists. One of the most vicious aspects of the campaign has been the use of detentions, arrests, torture, televised confessions, and enforced disappearances to punish lawyers and legal advocates who have defended various victims of the Chinese government’s human rights abuses, including religious adherents, petitioners, artists, and reporters.  On July 9,2015, an unprecedented, sweeping, nationwide crackdown began in which over 300 human rights lawyers, legal professionals, and human rights advocates were detained, summoned for questioning, or disappeared. This intensified targeting of the Chinese legal community came to be called the “709” crackdown.

Through the testimony of a legal expert and individuals with firsthand knowledge of repression at the hands of the Chinese government, the Commission will examine the foreign policy implications of China’s campaign to silence human rights lawyers in light of President Xi Jinping’s stated commitment to establish the rule of law in China.  The Commission will also examine the chilling effect of the July 2015 crackdown, the lawyers’ motivation for taking on politically sensitive cases, and the responses of many of their spouses and family members, who have been emboldened in their own advocacy despite ongoing intimidation and harassment.

Hearing can be viewed via live Webcast

Terence Halliday: Co-director of the Center on Law & Globalization at the American Bar Foundation and Co-author (with Sida Liu) of the book Criminal Defense in China: The Politics of Lawyers at Work.

******Additional witnesses may be added