The Congressional-Executive Commission on China (CECC) Turns its Attention to Xinjiang and the Uyghurs: "Surveillance, Suppression, and Mass Detention: Xinjiang’s Human Rights Crisis" 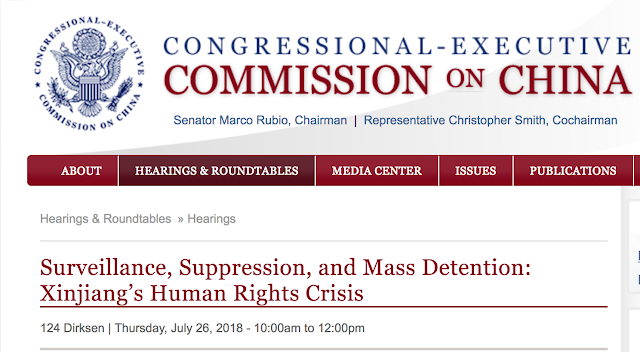 The CECC has now turned its attention to a critical consideration of Chinese policies toward its autonomous regions, and its treatment of religion (in general) and religious minorities)specifically). That consideration is worthy in its own right, of course.  To that end, the CECC program-Surveillance, Suppression, and Mass Detention: Xinjiang’s Human Rights Crisis--looks specifically at Uyghurs and other primarily Muslim ethnic minorities in the Xinjiang Uyghur Autonomous Region. The analysis, however, may tell us more about the state of U.S: politics than it might about the value and rectitude of Chinese efforts, judged either by international standards or in its own terms.

The CECC concept note for the hearings follows below along with links to access the the live stream of the hearings from Washington, D.C.

Uyghurs and other primarily Muslim ethnic minorities in the Xinjiang Uyghur Autonomous Region (XUAR) have been subjected to arbitrary detention, torture, egregious restrictions on religious practice and culture, and a digitized surveillance system so pervasive that every aspect of daily life is monitored—through facial recognition cameras, mobile phone scans, DNA collection, and an extensive and intrusive police presence.  There are credible reports that as many as a million people are or have been detained in what are being called “political reeducation” centers, the largest mass incarceration of an ethnic minority population in the world today. There are recent reports of deaths in custody including suicides.  Among those detained in these and other detention facilities are dozens of family members of Radio Free Asia (RFA) Uyghur Service journalists based in the United States, as well as family members of prominent Uyghur rights activist Rebiya Kadeer—amounting to attempts by the Chinese government to silence effective reporting on human rights conditions in the XUAR and Uyghur rights advocacy. This past year, under intrusive “home stay” programs, XUAR officials have also sent nearly a million Communist Party cadres and government workers to live with ethnic minority families in their homes for certain periods of time, carry out political indoctrination, and monitor their daily activities.  Also troubling within the context of the crackdown is the extent to which international companies, who have reportedly supplied surveillance and biometric technology to Xinjiang authorities, may be unwittingly or wittingly complicit in these human rights abuses and privacy violations.

The hearing will look at the serious and deteriorating human rights situation faced by Uyghurs; examine the Chinese government’s efforts to build the world’s most advanced police state in the XUAR, and explore policy options to address these issues within U.S.-China relations.

The hearing will be livestreamed via the “Live Hearings” link on our webpage and the CECC’sYouTube channel.