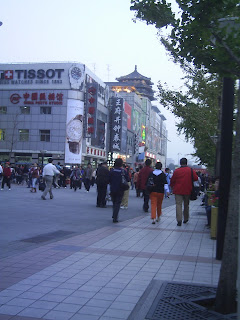 CECC has just released new analysis in two areas of activity of the Chinese state that they have been following for some time; (1) Chinese Authorities Continue To Suppress Lawyers After Replacing Minister of Justice (March 15, 2018.); (2) Campaign of Forced Evictions in Beijing Contravenes International Human Rights Standards (March 14, 2018). Both have generated much commentary and substantial controversy within and beyond China. The Reports do not break much new ground, though they reflect current thinking in Washington.  The summary of both follows along with the CECC Press Release and some very brief comments.

Particularly interesting was the CECC's efforts to use international standards to advance their arguments:

The effort presents a bit of irony.  The United States has refused to apply the International Covenant for Economic, Social and Political Rights in the United States; but China has. On the other hand, the Chinese have not embraced the International Covenant on Civil and Political Rights, though the U.S: does (though its application is filtered through and subordinated by U.S. Constitutional limitations).  Reliance on the Universal Declaration of Human Rights is a temptation of all states, and sometimes to very good effect--but those are political and moral, not legal, arguments.  The reliance on the work of UN Committee on Economic, Social and Cultural Rights evidences the sort of "action shopping" that has tended to make the work of these committees far less valuable than they might be.  Bit the U.S: and China will advance the statements, conclusions, warnings and other actions of those committees when it suits them and to reject their work when that sits instead.  In any case, the arguments as made by the CECC would be rejected, and quite strenuously by the esteemed chairs of this Committee were they directed to the actions of the U.S. government.  And yet having made the arguments, they will be more difficult to resist when turned on the U.S. itself--a pattern that has certainly commenced. Thus, both the value of the argument as politics, and its weakness in law

Summary abstracts of the Reports:


In February 2017, the Chinese Communist Party leadership appointed Zhang Jun as Minister of Justice, replacing Wu Aiying. Unlike Wu, Zhang is legally trained and has extensive legal experience, including having served as a vice president of the Supreme People’s Court, but there is little indication that his policies will be more sympathetic to lawyers than those of his predecessor. During his tenure, Zhang has signaled that he will focus on controlling lawyers more tightly, especially with regard to their out-of-court speech. In September 2017, officials from public security bureaus, justice bureaus, lawyers associations, and politics and law committees conducted lengthy and intrusive on-site “inspections” of at least seven law firms that have engaged in rights defense work.


On November 18, 2017, a fire killed 19 people in a neighborhood in Beijing municipality. Two days later, the Beijing government launched a 40-day campaign to “inspect” and “rectify” fire hazards. What followed were large-scale forced evictions and demolitions in neighborhoods across Beijing. Residents reported being forced to leave with three days’ notice or less. Media and advocacy organizations estimated tens of thousands were affected, primarily Chinese migrants who were not registered residents of Beijing under the Chinese government’s household registration (hukou) system. As events unfolded, affected residents voiced their concerns to journalists, and in some cases attempted to confront government officials. Local organizations and individuals offered assistance to evictees, as Internet users across China criticized the evictions. The government responded by restricting domestic reporting on the evictions, censoring online discussion, restricting local groups providing aid to evictees, and detaining at least one individual for posting videos relating to the evictions online. Many observers linked the eviction campaign to the government’s long-term plans to cap the population of Beijing. Experts, however, warned that reducing the number of migrants would increase the cost of living in Beijing, and that the evictions could harm social stability in the long run. Actions taken by Chinese government officials enforcing the eviction campaign in Beijing contravene both international standards and Chinese law.

(Washington)—The Congressional-Executive Commission on China (CECC) this week published new analysis pieces on the recent forced evictions campaign in Beijing and expanded efforts to control the activities of lawyers. Media or other inquires can be directed to Scott Flipse, Director of Policy and Media Relations, (202) 226-3777.

The CECC was created by Congress in October 2000 to monitor human rights and the development of the rule of law in China, and to submit an annual report to the President and the Congress. Members of the Commission include up to nine Representatives and nine Senators from both parties, along with five senior officials in the Executive Branch, representing the Department of State, the Department of Labor, and the Department of Commerce. Senator Marco Rubio and Representative Chris Smith serve as the chair and cochair respectively of the CECC.
Posted by Larry Catá Backer at 3/16/2018 06:20:00 PM

Email ThisBlogThis!Share to TwitterShare to FacebookShare to Pinterest
Labels: China, Law and Culture