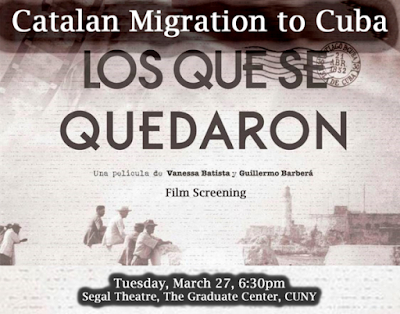 Worth attending if possible. A less well known but fascinating history, one which touched part of my own family. It was originally scheduled for March 7th but was postponed due to snow.

Using original footage from the early 20th century and interviews with surviving descendants and Catalan immigrants, Los Que Se Quedaron traces Catalan migration to Cuba, a process that began in full force in the 19th century.

TO REGISTER send e-mail to bildner@gc.cuny.edu

Email ThisBlogThis!Share to TwitterShare to FacebookShare to Pinterest
Labels: cuba