Please Join Us: Conference--Rule of Law and Governance in China at Home and Abroad (国内与国外两个视角) 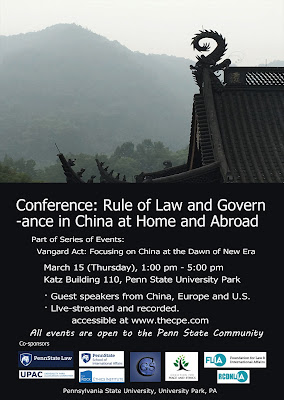 On Thursday 15 March 2018, the Coalition for Peace & Ethics and the Foundation for Law and International Affairs will host the Conference: Rule of Law and Governance in China at Home and Abroad (国内与国外两个视角).  We gratefully acknowledge the support of Penn State University (School of International Affairs/Law) which provided in-kind support for these events. The Conference runs from 1.00  - 5.30 P.M. and will be held in the Katz Building of Penn State Law/SIA Room 110.

It is the final part of its series, The Vanguard Acts: Focusing on China at the Dawn of its 'New Era.'  The Conference Note may be accessed HERE.  The PROGRAM follows.


Panel on Rule of Law in China at Home

Sun Ping, The Key to Understand the “New Era:” The Reform of the Party-State Institutions
Since the 18th National Congress of the CPC, a series of dramatic incidents and radical reforms have baffled and confused the world. After the coming of a “New Era” was announced by the 19th National Congress of the CPC, it seems more difficult to see through the mists of the tedious, complex, and from some point of view, even contradictory CPC report. The reform of the Party-State institutions might be a key to these puzzles. The party-state system as a whole is a counterpart of the actual government in the western context. After more than 30-years Open-up and Reform, several sub-systems formed inside the great party-state system, which are like several parallels, separated but without check and balance. This kind of separation of powers has caused serious dysfunctions. It was target on these dysfunctions that several major measures have been taken since 18th National Congress of the CPC, including to adjust Party organizations and personnel, to check sub-systems through anti-corruption movement, to strengthen the system by law and to adjust the control of the civil society. In the New Era, the reform of the party-state institutions, an ambitious plan of recentralization, is unfolding. The direction and aims of the reform will decide the future of the New Era, where is full of both opportunities and challenges.
Sapio, Flora, Regulation with Socialist Characteristics in the New Era: The Role of Groups of the Communist Party of China in Chinese MNC’s Corporate Social Responsibility
The most important defining feature of Socialism with Chinese Characteristics in the New Era is the notion of Party leadership. This notion possesses important theoretical and empirical dimensions and implications, deserving of further exploration by the body of literature on CSR. Considered in their empirical dimension, groups of the Communist Party of China are the institutions that instantiate Party leadership over processes of governance and corporate social responsibility in MNCs. This paper has the goal to pave the way to a more solid grounding of analyses of CSR within their domestic and global contexts. Part I analyzes the notion of social responsibility (shehui zeren) against the backdrop of Chinese Party-State Constitutionalism. Part II describes the institutional and regulatory mechanisms used to monitor CSR compliance by MNCs. These mechanisms consist of Party leadership over CSR, professional guidance by the SASAC Guidance Committee on Central Enterprises’ Social Responsibility, and by mechanisms of regulatory enforcement and inspection. Part III describes the methods uses to assess CSR compliance. Beyond the generic duty of disclosure, CSR compliance is assessed through evaluation and ranking procedures, where big data has already come to play a pivotal role.
Shi Xinzhong, tba.
Commentator: Shaoming Zhu

Panel on Governance in China and Abroad

Backer, Larry, China’s One Belt One Road (OBOR) Initiative and the New Communist International.
The Third, Communist, International (Comintern) lasted from 1919 when it was established by Lenin in Moscow, through 1943 when it was dissolved by Stalin as a gesture toward his allies against Axis powers. It produced a powerful template for the internationalization of ideology and its discipline by a central authority. This paper considers the echos of the Comintern in the structures and operations of the OBOR Initiative. It explores the extent to which OBOR might be considered the start of a 4th International, one grounded not on politics and revolution, but on economics and markets based coordinated power.
Gao Shan, Transnationalization of Socialist Law in Trade Institutions Outbound Chinese Constitutionalism
Roland, Nicholas, The Future of the State.
In this presentation, the author reviews literature on the state in sociology and international relations with special emphasis on state planning for the future based on insights from the sociology of expectations and management literature from futures studies. Guided by changes in the Chinese Communist Party Congress and China’s broader engagement with the world economy, the author considers the dynamics and implications of future-oriented, aspirational, nation-level projects such as the One Belt One Road Initiative.
Keren Wang, Sacrificial Personae Under Conditions of Digital Governmentality
Commentator: Nicholas Schultz