"From the Belt and Road Initiative to Social Credit Systems: Tech and Business Relations Between the US and China": Presentaiton for the Global China Connection Penn State Chapter Industry Expert Series 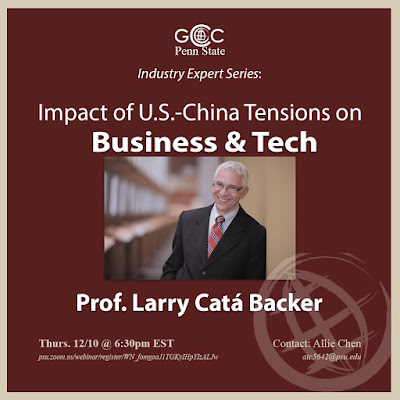 I was delighted to have been invited to speak as part of the Global China Connection Penn State Chapter Industry Expert Series on 10 December on issues relating to the impact of U.S.-China tensions on business and technology. I entitled my presentation  From the Belt and Road Initiative to Social Credit Systems: Tech and Business Relations Between the US and China.

The framework for this discussion of China, business and tech was on the fundamental shift in baseline from the end of the golden age of globalization, definitively marked by the election of Mr. Trump in 2016 (but marked as well by the development of "New Era" China during the 2nd term of the Obama administration) to what appears to be the emerging shape of post-global globalization now much more clearly discernible on the cusp of the Biden Administration which begins January 2021. This transformation of baseline is marked by key shifts: () from competition to conflict; (2) from integration to de-coupling; (3) from market penetration to inward turning and regional self-sufficiency; (4)  from human rights universalism to human rights entanglement; (5) from the development to the business and politics of data; and (6) from the business of the development fo productive forces to tat of the control of global production chains.

I focused on three issues within the galaxy of possible analytic approaches to make some sense of this shifts and draw supplication.  The first was to focus on fundamental ideological differences driving deepening divisions in approach and in the way in which the world is seen, understood, and exploited. The second was to examine the shape of emerging business structures in post-global globalization in the shape of the new Chinese and American imperial structures. The third was to explore the role fo tech in these new environments.  In each of thes contexts it was as important o ask what was driving the results--for example was tech driving change or was change driving tech, etc.

I noted points of conflict: (1) ideology has become more incompatible and mutually incomprehensible; (2) global trade as an expression of ideological vision and objectives; (3) tech as protagonist, language or instrument; and (4) data regulation as a basis for border building and the reification of new imperial communities built around China and the U.S. as respective centers of political ideology expressed as business, tech, and trade. I concluded the presentation by suggesting that tech and business will remain high priority issues. Both tech and business (understood as clusters of economic activity around value producing sectors) will be driven by collateral effects and objectives as they become more closely tied to issues of security arrangements and peace. The ethics of big data and the use of data and analytics (descriptive, predictive, and managerial) will remain highly contested. The ideological differences will intensify international contests for control of global baseline narrative. Lastlym the way these conflicts will manifest will depend on the vision and calculations of the incoming Biden Administration; those of the current Chinese Administration are clear enough.

VIDEO RECORDING OF THE TALK MAY BE ACCESSED HERE