In perhaps the boldest example yet of "retail regulation," Wal-Mart is stepping ahead of federal regulators and using its muscle as the world's largest retailer to move away from a class of chemicals researchers say endanger human health and the environment.

Increasingly, retailers are barring specific chemicals from products in their stores in response to concerns from consumers and advocacy groups. In 2006, for example, Whole Foods became the first national retailer to ban bisphenol A, or BPA, from baby bottles and children's cups. Health advocates had raised questions about the safety of BPA, a widely used component in plastic that has been linked to reproductive problems, cancer and other health disorders in laboratory animals. (Id.). 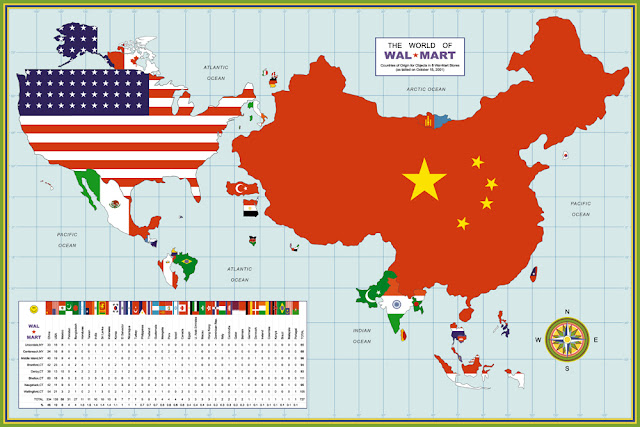 (From Benjaminedwards.net)
What the media has only now been catching up on is the decade old move by corporations to bypass the slow and un-harmonized national programs of regulation in favor of harmonizing operations globally through their own supply chain networks augmented by recognition of harmonization among similarly situated large corporate groups.  See, e.g., Backer, Larry Catá, Multinational Corporations as Objects and Sources of Transnational Regulation. ILSA Journal of International & Comparative Law, Vol. 14, No. 2, 2008. Backer, Larry Catá, Economic Globalization and the Rise of Efficient Systems of Global Private Lawmaking: Wal-Mart as Global Legislator. University of Connecticut Law Review, Vol. 39, No. 4, 2007.
The method is simple--a substitution of regulatory contract for public regulation.  The scope of governance is also well established--the supply chain of the large multinational.  "A spokesman for Wal-Mart said the company quietly made the decision to ban PBDEs from some products "several years ago" but just recently reminded suppliers that it would begin verification testing in June. Spokesman Lorenzo Lopez said Wal-Mart was motivated to act after a handful of states began banning PBDEs. " ( Lyndsey Layton, Wal-Mart bypasses federal regulators to ban controversial flame retardant, Washington Post, Feb. 26, 2011).  The object of these supply chain regulatory contracts is also well understood--consumer markets.  Customers and investors now serve as the new focus of accountability for corporate action.  The stage on which that accountability plays out are the world wide operations of the enterprise, without regard to the legal relationships between the various elements of this supply chain.

In the absence of federal action, state legislatures have been enacting bans on controversial chemicals, creating a patchwork of restrictions and a regulatory challenge for companies.
Several members of Congress have been pushing to reform chemical laws to make it significantly easier for the EPA to restrict or ban chemicals that are known hazards.
But retail regulation may prove a faster route, observers say.
"This will have both direct and indirect ripple effects," said Richard Denison, senior scientist at the Environmental Defense Fund. "The companies producing for Wal-Mart are not going to make a special line for them and another line with those chemicals for everyone else. And this is going to make it easier for other retailers to follow suit."(Id.).

The state becomes a segmented supporting actor.  Its law may be effective within its territory, but there will be moments when even those efforts to produce a domestic legal order that binds will be irrelevant to the setting of global behavior norms.  Global investors, consumers and entities will develop their own systems in parallel.
This is the heart of the governance context in which business and human rights regulatory frameworks are emerging. At its core is the understanding that corporate regulatory systems are emerging autonomous of the domestic legal orders of states.  Backer, Larry Catá, Governance Without Government: An Overview and Application of Interactions Between Law-State and Governance-Corporate Systems (March 1, 2010). Penn State Legal Studies Research 10-2010. Autonomy does not mean resistance to emerging global consensus about corporate conduct, especially that which touches on what the West understands as human rights articulated in a variety of soft law instruments and in the international instruments. The new U.N. "Protect, Respect and Remedy" framework for business and human rights is grounded on an acceptance of both the idea of an autonomous sphere of corporate regulation and of the communication (and convergence) of traditional governance centered on the state and of corporate governance.  Larry Catá Backer, On Challenges to Operationalizing a Transnational Framework for Business and Human Rights--the View From Geneva,  Law at the End of the Day, Oct.18, 2009. The future will see more recognition of the regulatory effects of the operations of multinational corporations-- a law of corporate behavior autonomous of the law systems of states--and efforts at the international level to coordinate governance regimes of states and those of economic enterprises.  See Larry Catá Backer, Inter-Systemic Regulatory Coherence: GRI and the Operationalization of the OECD's Guidelines for Multinational Enterprises Framing Governance for Business and Human Rights, Law at the End of the Day, March 18, 2011.