But when SWF's interests in companies grow larger and their stakes more important, they  But Qatar Holding's demand for better terms for Glencore's proposed merger with Xstrata has stunned both the companies' managements and markets, raising fears such funds may be entering a new phase of activism." (Ibid).

The saga of the Xstrata merger serves as a reminder that  SWFs may not ordinarily be aggressive, but when conditions are right, they can be, and to great effect.


Yet there is no consensus here.  "No sovereign-wealth fund has previously opposed such a major deal so vocally, says Roubini Global Economics." (Andrew Peaple, Qatar Unleashes Passive Aggression on Xstrata, supra). Peaple suggests instead that "Despite being the world's 12th-largest sovereign-wealth fund, Qatar Holding doesn't want to run a full-time, hedge-fund-style activist operation." (Ibid.). Indeed, Qatar appears to have found itself in a dominant position almost accidentally. But accidental or not, Qatar will defend its interests.  "Qatar Holding prefers to be a passive investor away from the limelight—it doesn't plan, for example, to get involved in public calls for Barclays CEO Robert Diamond to resign. But that doesn't mean it won't defend its interests."  (Ibid.).

So what is the problem?  Transparency! "The problem for companies like Xstrata where Qatar holds a stake is that it likes to be secretive." (Ibid.).  In a world in which all sovereign wealth funds attempted compliance with even the minimal requirements of the Santiago Principles, this issue would not be as great.  But many don't. Qatar is among the worst,  See, e.g., International Forum of Sovereign Wealth
Funds (IFSWF) IFSWF Members’ Experience in the Application of the Santiago Principles, July 7, 2011, and the critical assessment of that report, Sarah Bagnall and Edwin M. Truman, IFSWF Report on Compliance with the Santiago Principles: Admirable but Flawed Transparency, Peterson Institute for International Economics Policy Brief No. PB11-14 (August 2011).

The problem of transparency exists in multiple dimensions.  For the company, the issue is one of planning.  Where shareholder communication is inadequate, important and large scale deals may be hijacked by an SWF with a large stake.  For states in which these transactions occur, or which have an effect within the territories of those states, SWF shareholder intervention can project political or policy dimensions into a deal.  Where, for example, such transactions are subject to local review--for example by competition agencies or because of the national security effects of the transactions, the SWF intervention can raise the regulatory review stakes. In this case, the principle result will be to increase the transaction price. That is hardly cause for panic.  But to the extent that shareholder behavior cannot be anticipated and to the extent it is motivated by non-financial concerns, it may have effects on the operation of markets and the willingness of states to keep the investment doors open, at least for sensitive investments.  Or it may provide a corrective for dealmaker arrogance and provide a needed balance of forces in market transactions for control. 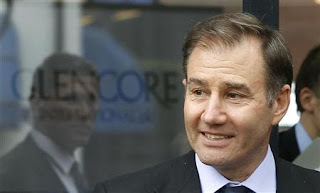 By rejecting Glencore's coveted acquisition of miner Xstrata, Qatar could also put paid to the reputation of Ivan Glasenberg, chief executive of the commodities trader, as consummate dealmaker.
Those who have worked with him on takeovers - and against him defending the companies he targeted - say Glasenberg's self-belief is second to none. That, plus unbending determination, means he normally gets his way.
But this time he appears to have been wrong-footed, thinking the support of major Xstrata shareholder Qatar Holdings was in the bag.
"Did Glencore misread the Qataris? Absolutely," said one banker familiar with the mining sector, but not involved in the deal. "Qatar does not like the limelight, so they must feel pretty strongly to end up going public." (Victoria Howley, Glasenberg's dealmaker renown at mercy of Qatar, Reutrers, June 28, 2012)