For those interested in an analysis of the changes and restructurings of Cuban economic life, Philip Peters has published a very readable and interesting work:  Philip Peters, A Viewer's Guide to Cuba's Economic Reform, Lexington Institute, May 2012. 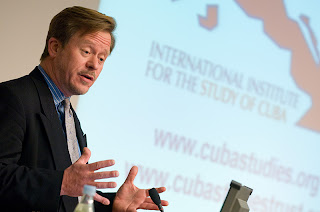 
The Lexington Institute website describes Mr. Peters: "Philip Peters joined the Lexington Institute in April 1999. He has responsibility for international economic programs with a focus on Latin America. . . . Peters is an adviser to the Cuba Working Group that formed in January 2002 in the House of Representatives. He has testified before Congress and the U.S. International Trade Commission and has given talks on Cuba and U.S. policy to diverse audiences."   He also authors posts for the blog: The Cuban Triangle: Havana-Miami-Washington events and arguments and their impact on Cuba.  Included in those posts is a useful chronology of Cuba’s economic reforms that Mr. Peters will update and that also appears as an appendix to A Viewer's Guide to Cuba's Economic Reform. 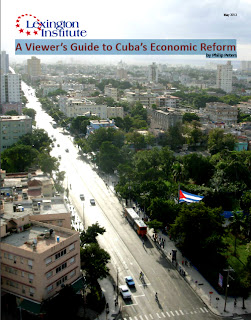 A sense of the thrust of the analysis may be gleaned from the conclusion ( A Viewer's Guide to Cuba's Economic Reform, page 22):

The reform of Cuba’s socialist economy, as described in the Communist Party’s lineamientos, is planned to carry on through 2015. The record so far indicates that reforms will continue at a deliberate but steady pace, with trial, error, and correction along the way.

Outsiders, seeing that Cuba is a one-party state, readily ask why the reform process moves so slowly given that it is backed by clear government and Party commitments. There are several possible reasons.

One reason is political caution, a hesitancy to force changes that are inevitably going to cause dislocation. Cuban leaders have underscored the urgency of change,  but none argue that reforms need to be implemented with emergency shock therapy. All indications are that they seek the therapy without the shock.

There is also resistance.

Some is bureaucratic: government employees do not want to work themselves out of a job. Some is ideological, on the part of committed socialists who equate markets and incentives with capitalism itself, and who think reforms will lead to the system’s undoing.

Just before the recent visit to Havana of the Vietnamese Communist Party chief, Nguyen Phu Trong, the Cuban newspaper Juventud Rebelde praised Vietnam’s “doi moi” economic restructuring, calling it a “process that contemplates introducing the logic of markets into the economy, but with a socialist orientation.”

In a political system where the state’s economic sway has been so large for so long, a change in economic structures cannot help but affect politics, political culture, and governance too.


Here is the table of contents:


And from the Mission Statement of the Lexington Institute:

It is the goal of the Lexington Institute to inform, educate, and shape the public debate of national priorities in those areas that are of surpassing importance to the future success of democracy, such as national security, education reform, tax reform, immigration and federal policy concerning science and technology. By promoting America's ability to project power around the globe we not only defend the homeland of democracy, but also sustain the international stability in which other free-market democracies can thrive.