Nichola Gutgold on "The Mother Lode of All Political Weapons: The Spouse" 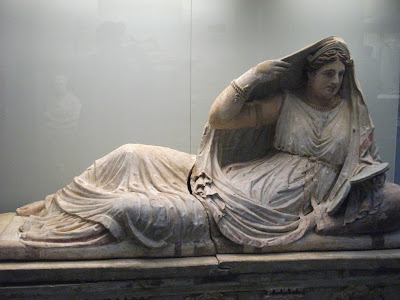 She has been particularly interested lately in the rhetorical styles of the women married to presidential candidates, especially now Ann Romney. She is working on an article examining the evolution of a preview of that study. that style and its consequences.


The Mother Lode of All Political Weapons: The Spouse

Ann Romney’s speech at the Republican National Convention almost wasn’t covered by network television because of the threat of hurricane. It would have been a shame since spouses of candidates provide a window to them that no one else has. And spouses seem to know how to tug at our heart strings in ways their husbands have not. Since the GOP Convention is in the news, let’s review some Republican spouse speeches.

1996. It is getting to be a bit retro and still the moment of Elizabeth Dole descending the steps at the Republican National Convention in San Diego in her stylish, form fitting mustard silk suit is as vivid a memory now as it was the very night I watched her on my television. After seeing Ann Romney’s convention speech some common threads in these women’s speeches emerge. There seems to be a rhetorical imperative for the spouses of presidential candidates: motherhood.

Elizabeth Dole is not a mother in the biological sense, yet her maternal side was on full display during her 1996 convention speech when she strolled around the convention hall to share the human side of Bob Dole. Like a hostess at a grand Southern party, she was warm, cordial, and careful to advance her agenda. What another wife might say about her husband at a political convention may be very similar to what Elizabeth Dole said about Bob Dole in this speech. But the ingenious way she said it, and moving through the audience while telling stories and visiting with witnesses of his kindness, showed her ability to create a new kind of speech under a controlled condition. Indeed, Dole a political powerhouse in her own right, presented herself as a loving, kind marriage partner, and one whose ethos of humanity herself—as president of the American Red Cross—served as a kind of mother to the nation in its times of dire need.

Four years later I was in the audience at the GOP Convention in Philadelphia when Laura Bush addressed the audience. Press clippings described her as a shy librarian terrified of her national debut. On the stage were school desks filled with scrubbed-faced children as she spoke of her role as a mother and teacher. She said: “George and I have been blessed throughout our 23 years of marriage with many interesting opportunities. Our lives have changed enormously in the last six years. He was elected Governor, we moved to Austin with our then 13-year-old twin teenagers, and since then, we’ve been through dating, driver’s licenses, prom night and just a few weeks ago, high school graduation. Now we’re helping our daughters pack for college and we’re preparing for our next life crisis…empty nest syndrome.” She described George W. Bush reading “Hop on Pop” to their daughters as he lay on the floor and the girls would literally hop on pop. A story only a mother could tell. And she did it again four years later when I saw her at Madison Square Gardens during the 2004 GOP Convention. In both 2000 and 2004 I led groups of students through the conventions as experiential learning in public speaking). A more experienced and relaxed speaker than she was in 2000 (all speakers improve with practice) this time she tied her husband’s initiatives in his first four years in office with her own passion for teaching and family. She updated the audience on her family dynamics: “These have been years of change for our family as well. Our girls went off to college and graduated, and now they are back home…My mother moved out of my childhood home and into a retirement community. We lost our beloved dog, Spotty, and had our hearts warmed by the antics of Barney.”

It is hard not to love a pet-loving mama.

In 2008 Cindy McCain warmed the crowd at the 2008 Convention in Minneapolis when she told the audience “Well, I hit a home run with John McCain! I got the most marvelous husband and friend and confidant….and also the best father you could ever imagine.” She spoke of her children: “our son, Jack, our son Jimmy “headed for harm’s way” and of her experience witnessing the poverty in Bangladesh as a result of a cyclone. It was then, she said, that she realized: “There was something I could do. I could take them home. And so I did.” The camera panned to their children—seven in all, four of whom they adopted. She summed up her persuasive effort by saying: “This is a good man, a worthy man…I know. I have loved him with all my heart for almost 30 years.”

Wife and mother extraordinaire, no doubt.

So this week when Ann Romney took center stage in Tampa, Florida I wondered what she would say to soften her husband in the same way that Elizabeth Dole and Cindy McCain had to do before her (not Laura Bush – many Americans really liked George W. Bush. We even wanted to have a beer with him, remember)?

These women can speak in credible ways about the candidates like no one else can and their speeches are crucial to the success of their spouse candidates. Ann Romney may have almost been stopped by a hurricane, but few would argue that these four Republican women have demonstrated that maternal spouses are potent political forces.

Nichola D. Gutgold is an associate professor of Communication Arts and Sciences at Penn State Lehigh Valley and author or co-author of six books and a number of research articles that focus on women’s rhetorical styles.