The Trial of Bo Xilai--Broadcast Live 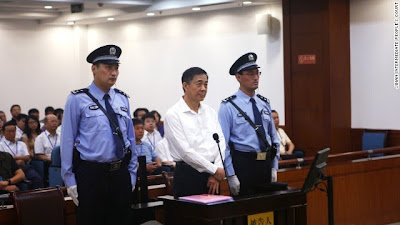 Bo Xilai's trial is currently underway. Every minute detail of the court proceeding is broadcaster to the public via the official microblog of the Jinan court. The court proceedings are surprisingly "adversarial", with Bo's defense rather fiercely arguing against the prosecutor's allegations. This is quite unusual for political trails in China. "Hearings would last two days, Chinese state television CCTV said in a tweet, with a verdict "likely in early September". " (Bo Xilai denies China bribes as trial opens in Jinan, BBC News China, Aug. 22, 2013).

One of the most interesting aspects of the case involves the way in which what should be quite separate and distinct proceedings--the extra-judicial disciplinary proceedings against Communist Party members (shuanggui)--has bled over into the criminal trial which is supposed to be conducted under the constraints of the Chinese Constitution. Prosecutors are generally not supposed to have access to shuanggui materials but in practice that wall of separation is breached, a practice that impedes movement toward the construction of a constitutional socialist rule of law system in China. (Backer, Larry Catá and Wang, Keren, State and Party in the Scientific Development of a Legitimate Rule of Law Constitutional System in China: The Example of Laojiao and Shuanggui (June 1, 2013). Conference: Rule of Law with Chinese Characteristics, Vol. 2013, p. 101, 2013; Penn State Law Research Paper No. 26-2013).

Microblog of the Jinan court may be accessed HERE (in Chinese).


This from CNN: "Bo Xilai, the former high-flying Chinese politician whose dramatic fall from grace shook the ruling Communist Party, made a defiant court appearance Thursday, disputing several of the accusations against him at his trial in eastern China." (David McKenzie. Steven Jiang and Jethro Mullen, Bo Xilai contests bribery charges at his trial in eastern China, CNN, Aug. 22, 2013). 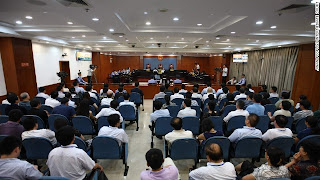 The trial - which started at 08:30 (00:30 GMT) - is taking place at the Intermediate People's Court in Jinan, in eastern Shandong province. The court is providing an account of proceedings on its official microblog.

"I hope the judge will try this case fairly and justly according to the law of the country," Mr Bo reportedly said.

Five of Mr Bo's relatives are said to be in court, along with 19 journalists and 84 other people. Foreign journalists have not been allowed in.

According to the indictment posted by the court, Mr Bo is accused of receiving bribes totalling 21.8m yuan ($3.56m; £2.28m) from two Dalian-based businessmen.

Mr Bo denied accepting any money in the form of bribes.

The court microblog quoted him as saying about one of the cases: "That [businessman] Tang Xiaolin gave me three bribes - that did not happen. He asked me to help him sort out something, and these were all done according to procedure."

Mr Bo said he had admitted this "against his will" under questioning, adding: "What I meant was that I was willing to take the legal responsibility but I had no idea of all these details back then."

Using surprisingly strong language, he described Tang Xiaolin as a "crazy dog" who was "selling his soul" to reduce his sentence, which brought a rebuke from the judge. He also described testimony provided by prosecutors from his wife as "ridiculous". In written evidence to the court, Gu said she had seen a large amount of money in the family's safes, matching the amount allegedly given to Mr Bo from Mr Tang. (From Bo Xilai denies China bribes as trial opens in Jinan, BBC News China, Aug. 22, 2013)