The Military, Ideological Frameworks and Familial Marxism: A Comment on Jung-chul Lee, “A Lesson from Cuba’s Party-Military Relations and a Tale of ‘Two Fronts Line’ in North Korea” 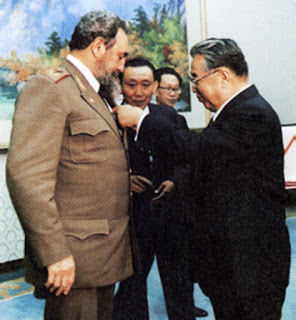 Much has been written about both North Korea and Cuba. Most of it has been directed to their respective foreign policies, and their singular variations on Marxist Leninist state organization.  Each is understood to be a peripheral state that, through the circumstances of the Cold War, managed to leverage their place in the world substantially beyond what their size and wealth might have predicted.  But few have sought to compare these two regimes that share so much.

A recent notable exception centers on the work of the Korean Institute for National Unification.  Representatives of KINU presented a number of quite insightful papers at the 25th Annual Meeting of the Association for the Study of the Cuban Economy, July 31, 2015.

This post focuses on one of those papers, Jung-Chul Lee, “A Lesson from Cuba’s Party-Military Relations and a Tale of ‘Two Fronts Line’ in North Korea” for which I served as discussant.  My Comment may be accessed HERE, and the introduction is set out below.

The Military, Ideological Frameworks and Familial Marxism: A comment on Jung-chul Lee, “A Lesson from Cuba’s Party-Military Relations and a Tale of ‘Two Fronts Line’ in North Korea”
Larry Catá Backer


For the last 25 years, the Association for the Study of the Cuban Economy (ASCE) has sought to embed analysis of the special case of Cuban within the main stream of discussion of law, economics, politics, and culture. That process has sometimes found resistance in the long cultivated notion that the Cuban situation was sui generis, a porridge composed of equal parts colonialism, cultural hegemony, geography, race and religion, cooked in a pot created by the Cold War of the last century and stirred by the fairly large ladle that is the product of an ideology of developing states. Yet that sui generis is more a product of the romanticism of Europe and North America than any reality, combining large dollops of Caribbean exoticism, Gnosticism in political conflicts, and the exportation of ideological battles between the European and North American left and right.

This becomes clearer when strangers to this odd cultural construction of “Cuba in the World” begin to examine the situation of Cuba. This is quite apparent in the excellent papers sponsored by the Korea Institute for National Unification (KINU). These papers suggest a better picture of Cuba within larger streams of economic, cultural, political and social evolution that are touching, in distinct ways, virtually every country of this planet within (or without) the strong currents of globalization. While much of the interest in this area tends to center on the contests between politics and economics in the context of what most in the West view as a necessary transition to something else (usually democratic in character and market based operation), few consider the issue from the institutional character of change that focuses on civil military relations. For developing states, these institutions relations are sometimes critical for determining the pace and scope of transition, as well as its direction. Consider in this respect recent changes in Egypt and Turkey, two states with traditionally strong militaries that have moved in very different directions in the last 10 years.

Even less often considered, except by specialist institutions, are civil military relations in Marxist Leninist developing states. It is this issue that is taken up by Jung-chul Lee of Soogsil University in Korea in the excellent paper, “A Lesson from Cuba’s Party-Military Relations and a Tale of ‘Two Fronts Line’ in North Korea.” My comments are directed to that paper.