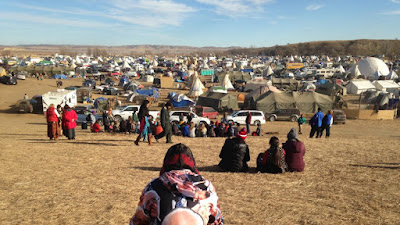 Protesters gather at an encampment near Cannon Ball, N.D., on Saturday, a day after tribal leaders received a letter from the U.S. Army Corps of Engineers saying the federal land would be closed to the public Dec. 5.
(James MacPherson / Associated Press)

The intertwining of environmental responsibilities, human rights, and the relationship of indigenous peoples to the land and their neighbors within the structures of the modern nation state  is very much in evidence in the still smoldering confrontation around the Dakota Access Pipeline. That confrontation involves the government of the United States, the project developer, Energy Transfer Partners, and the Standing Rock Sioux, near whose lands the pipeline will pass. Yet in a larger sense, it involves all of us.

The Standing Rock Sioux opposes the pipeline's construction near the Sioux reservation on the grounds that it threatens their public health and welfare, water supply and cultural resources. What began as a small protest camp in April on the Standing Rock reservation has since morphed into an encampment with over 1,000 people. Over the past few months, the Sacred Stone Camp, as it is now called, has been the site of a number of antagonistic face offs between protesters and the oil company (Aaron Sidder, Understanding the Controversy Behind the Dakota Access Pipeline,  Smithsonian, September 14, 2016).

The confrontation has involved lawsuits, calls by the government for voluntary work stoppage, and sometimes violent clashes between those who would halt the project and the company and its supporters. Only recently, "North Dakota Gov. Jack Dalrymple on Monday ordered a mandatory evacuation of protesters seeking to block construction of the Dakota Access pipeline, but both the state and the U.S. Army Corps of Engineers said they have no plans for “forcible removal” of the protesters. The Corps of Engineers earlier had said that it planned to close the camp, led by the Standing Rock Sioux tribe of North Dakota, by Dec. 5, and that anyone still there could be prosecuted for trespassing." (see here).

My colleagues, Melissa Tatum, Research Professor of Law at the University of Arizona, and Jennifer Hendry, an Associate Professor in Law and Social Justice at the University of Leeds School of Law, have taken on the issues raised in this context. Their essay, Contested Spaces and Cultural Blinders: Perspectives on the Dakota Access Pipeline, follows.

For its latest move in the Dakota Access Pipeline controversy, the U.S. Army Corp of Engineers issued a letter ordering protestors to vacate the Oceti Sakowin campsite north of the Cannonball River. Although framed as concern for the safety of protestors in the face of harsh North Dakota winters, in light of the confrontations during Thanksgiving week, it is clear that the actual intent of the order is to undermine the demonstration by forcing its relocation away from the front lines of the pipeline installation.

Although the media has framed the dispute as one focused on property and treaty rights, it is vital to note that the issue at the core of this standoff goes much deeper – it is at its heart, a fundamental clash of cultural perspectives regarding the use and valuation of land. Each of the parties views the landscape through a different cultural lens.

When the supporters of the pipeline survey the landscape, they see a route that avoids populated areas and solves the problems of the initial route, which skirted close to the city of Bismarck. Concerns about that route were raised by that city’s predominantly white population (recent US Census figures report Bismarck is 92% white). By contrast, when the Standing Rock Sioux look at the same landscape, they see a rich tapestry of sacred sites and other areas of cultural significance. They also see a route which imperils their drinking water, a peril that has been discounted by the Pipeline, which argues for the safety of its construction techniques and materials.

Claims and promises by oil and mineral extraction companies carry little weight in Indian country, however, as history has proven that such claims are often worthless. One only has to look at the devastation wrought at Black Mesa on the Navajo Nation, where the mining techniques used by Peabody Coal have caused significant and long-lasting damage to potable water supplies, not to mention the horrors at Tar Creek on the Quapaw reservation in northeastern Oklahoma. The waters of Tar Creek run a nuclear orange color, and contaminated chat piles present health hazards to the community, especially the children who climb and play on them. Indeed, Tar Creek is one of the oldest Superfund sites and is today still listed as “undergoing clean up” three decades after its listing.

(The Results of Mining at Tar Creek)


These disasters in Indian country are further reinforced by the well-publicized Exxon Valdez and BP oil spills. And those who live in Oklahoma, and who are now experiencing more seismic activity than California, can attest to the long-term consequences and harms caused by oil drilling techniques.

Unfortunately for the Standing Rock Sioux Tribe, and those who stand in solidarity with them, the approach of the federal government and the private interests constructing the pipeline is one that uses a different cultural lens, and it is this perspective that is recognized by and incorporated into existing law. From this perspective, undertaking the legally required consultations is sufficient; on these grounds the courts can assess the Pipeline’s compliance with the law.

To be clear on this point: both US and international law require that, prior to action being taking that could potentially impact Indigenous land, the government must consult with the relevant Indigenous group(s). The law does not, however, spell out the details of what constitutes the substance of the required consultation. In this respect, although consultation has occurred, its proscribed channels fail to allow for considerations of those harms that are of most concern to the Standing Rock Sioux, with the result that those concerns are effectively rendered invisible by the procedural formalities.

In addition, current methods of assessing and valuing the risks associated with the pipeline consider only those harms and damages understood as such by the dominant culture. This myopic arrogance elevates the cultural perspective of the majority and dismisses the concerns of the Tribe, particularly the concerns relating to sacred sites.

The result is a physical standoff in a geographic space that has already seen its share of tragic confrontations over the last two centuries – including disputes over the Black Hills, the massacre at Wounded Knee, and the occupation at Wounded Knee. While solving these deep-seated problems is unlikely to be easy, the first step must be an honest and open dialogue – a consultation in which all parties sit down in the spirit of cooperation, listen to and hear each other, and engage with each other’s concerns, instead of simply shouting the same soundbites across the table, walking away, and calling it “consultation.” Successful negotiations over management of the sacred sites at Medicine Wheel, Devils Tower, and Cave Rock have proven the utility of true consultation, while Wounded Knee has proven the consequences of a failure to consult. Have we learned nothing from history?