Announcing Association for the Study of the Cuban Economy Annual Conference 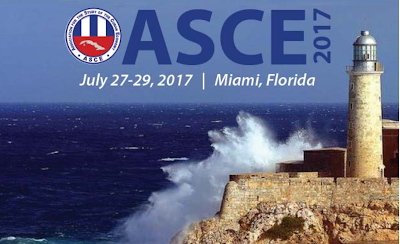 The 27th Annual Meeting of the Association for the Study of the Cuban Economy will take place in Miami, Florida 27-29 July 2017. The three-day conference, around the theme Cuba: Navigating a Turbulent World, will focus on evaluating the state of the Cuban economy taking into consideration the impending changes in Cuba’s relations with the United States. Those of you in Miami at the end of July might consider participating.

The press release announcing the Conference follows along with the draft Program.

Cuba: Navigating in a Turbulent World

ASSOCIATION FOR THE STUDY OF THE CUBAN ECONOMY
TO HOLD 27th ANNUAL CONFERENCE
"Cuba: Navigating in a Turbulent World" Taking Place at Downtown Miami Hilton July 27-29

Miami – July 7, 2017 – The Association for the Study of the Cuban Economy (ASCE) will hold its 27th Annual Conference at the downtown Miami Hilton (1601 Biscayne Boulevard) July 27-29. Titled "Cuba: Navigating in a Turbulent World," the three-day event will focus on evaluating the state of the Cuban economy, taking into consideration the impending changes in Cuba's relations with the United States. The conference program will feature scholarly individual presentations and roundtable discussions by world-class experts, including specialists from the island.

"With Venezuela's collapsing economy, one of the key issues to be discussed at this year's conference is the future of Cuba without Venezuelan trade and subsidies," says Helena Solo-Gabriele, Ph.D., ASCE president and an engineering professor at University of Miami. "Another key issue is whether Cuba will implement the economic reforms needed to stimulate the private sector and attract foreign investment to spur economic growth."

​Cuba's dual currency system, current economic policies, and prospects for future growth and change will be covered at the conference, together with social and legal issues related to the economy. This year, there will be two sessions dedicated to legal issues in Cuba titled "Foreign Investment in Cuba: Law, Policies, and Practicalities" and "Coordinating U.S. and Legal Principles to Resolve Property and Damage Claims." Continuing law education credits are available for both sessions. Additional topics include tourism, real estate, and agriculture.

An impressive roster of presenters who have been chosen based on the quality of their paper submissions include keynote speaker Marc Frank, a journalist working in Havana for Reuters and "Financial Times," and author of "Cuban Revelations: Behind the Scenes in Havana." Others include faculty from many esteemed universities in the United States and experts from the International Monetary Fund, World Bank, U.S. Department of Labor, and U.S. Department of State.

Special guest presenters who will be able to travel from Cuba include leading economist Omar Everleny Pérez Villanueva who will speak about economic anticipations on the island; intellectuals Dagoberto Valdés Hernández and Yoandy Izquierdo Toledo, both from Centro de Convivencia, who will speak about Cuba's education system and its impact on the economy; Dr. Alina Lopez Hernández, a philosophy professor and essayist, who will speak about the realities of the Cuban economy; top journalist Ernesto Perez Chang of Cubanet News who will speak about journalistic interpretations of Cuba's economy; Dr. Olimpia Gómez Consuegra, an agricultural engineer and a member of the Cuban Academy of Science until 2011 who will participate on a panel about agriculture; Laritza Diversent, a lawyer, independent journalist and human rights defender who will discuss the struggle to establish independent civil society organizations; and Joanna Columbié, an activist with Academia del Movimiento Politico Somos + who will also touch on the struggles of independent civil society. Sessions by these guest presenters will be conducted in Spanish.

In addition to scholars and professionals, the conference will feature a graduate and undergraduate student panel with papers addressing Cuba's housing sustainability, the influence of foreign policies, and even the influence of foreign fashion on the Cuban identity. Student papers were judged by a panel of experts and the winning students will receive a modest scholarship award plus travel funds to participate in the conference. These students are represented internationally from the U.S., the Netherlands, and Belgium.

"We are very appreciative of the financial support received from the Christopher Reynolds Foundation for the student paper competition and the Cuban scholar travel plans," says Solo-Gabriele.

"Cuba: Navigating in a Turbulent World" will open on Thursday, July 27th with two plenary sessions after an 8 a.m. breakfast; concurrent sessions will follow lunch and will dominate the Friday and Saturday programs. While a cocktail reception will take place on Thursday after the conference, an ASCE business meeting will be held on Friday at 6:45 p.m. The event closes on Saturday at 12:45 p.m. with two concurrent sessions. For more information on this conference, go to www.ascecuba.org. To register, go to http://www.ascecuba.org/2017-asce-conference-registration-form.

The Association for the Study of the Cuban Economy (ASCE) is a non-profit, non-political organization incorporated in the state of Maryland in 1990. With members from the US, Latin America and Europe, its mission is to promote research, publications, and scholarly discussion on the Cuban economy in its broadest sense, including on the social, economic, legal and environmental aspects of a transition to a free market economy and a democratic society in Cuba. ASCE is committed to a civil discussion of all points of view. Affiliated with the American Economic Association and the Allied Social Sciences Association of the United States, ASCE maintains professional contacts with economists inside Cuba –whether independent or associated with the Cuban government-- who are interested in engaging in scholarly discussion and research.