Transnational Regulation of Bangladesh's Economic and Labor Conditions: Agreement Reached by Companies and Global Trade Unions on a 2d Accord on Fire and Building Safety 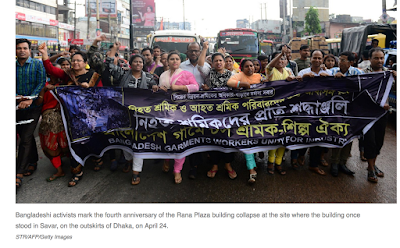 I have been writing about the fracturing of law and the rise of extra-national governance structures as the forms of economic globalization mature around transnational production chains. This produces fracture, porosity, permeability and polycentricity in the political structures of states (see, e.g., here, and here) and threatens the representational character of state legitimacy by shifting control of the most intimate relationships between a polity and its government from its own citizens to a host of overlapping transnational and foreign actors (e.g., here). The effect of these changes are more deeply felt in states that host the middle and lower tiers of global production chains (see, e.g., here).  They tend to reinforce traditional power relationships--now grounded on governance and control of economic activity, in place of the old relationships grounded on military power and political control (see, e.g., here). As a consequences, and especially for lower tiered host states, the solidity of the state itself becomes more difficult to maintain.

Among the most interesting examples of these transformations is Bangladesh--especially in the context of its control of its garment sector.  Those transformations were especially exposed in the aftermath of the collapse of the Rana Plaza factory building  (see, e.g., here). One of the most visible elements of the polycentric structures of law and governance in Bangladesh has been the built by multilateral groups of transnational corporations around fire and building safety (e.g., here).  But those structures have been enough to encourage global actors to build additional governance structures around economic institutions (the production chain) applicable to and through those states in which they operate (e.g., here (transparency pledge here)).

The institutional longevity of this arrangement appears to have been strengthened with the recent announcement of the renewal of the Accord for a second term.  That should come as no surprise, and follows form the logic of economic management through global production chains. "The agreement covers all suppliers producing for the signatory companies. In the event that agents or other intermediaries are part of the signatory’s business model, the signatory is responsible to assure that these intermediaries support the signatory’s efforts to fulfill obligations of this Agreement, independent of whether the intermediaries have signed this Agreement or not." (Here). The Accord's Press Release about this follows. The 2018 Accord may be accessed HERE.

Amsterdam/Dhaka, 29 June 2017. Companies and global unions have agreed on a 2nd Accord on Fire and Building Safety in Bangladesh (“Accord”). The agreement will enter into effect when the current Accord expires in May 2018. The Accord is an unprecedented, legally binding agreement between companies and trade unions to make factories in Bangladesh safe.


Several companies have now signed the renewed agreement with IndustriALL Global Union and UNI Global Union. Many more companies are expected to sign in the coming days.

– The Accord will continue its independent safety inspections and remediation program at existing and new factories covered under the agreement.
– The Safety Committee and safety training program will be extended to all factories.
– The renewed agreement includes additional commitments to ensure that workers’ rights to Freedom of Association are respected to protect their own safety.

The renewed agreement builds on the fundamental elements that have made the Accord successful; including: independent inspections, bi-partite governance, commitment to transparency, provisions to ensure remediation is financially feasible, Safety Committee training and a credible complaints mechanism.

“The new agreement demonstrates that international brands and global trade unions recognise the positive impact of the Accord and the need for the Accord to continue its work in Bangladesh to ensure that factories are made safe and stay safe”, says Rob Wayss, Executive Director and Acting Chief Safety Inspector of the Accord.

The Ready-Made-Garment (RMG) factories covered under the current Accord have made significant progress with safety remediation over the past four years. In this final year of the current Accord, the focus is on completing all outstanding key safety measures such as structural retrofitting, installation of fire alarm and fire protection systems and protected fire exits, and the continued delivery of the Safety Committee training program.

The Accord and its trade union, company, and NGO witness signatories will intensify our constructive work with factory owners, the Government of Bangladesh, BGMEA and BKMEA, the International Labour Organisation and donor governments and their relevant programs and initiatives.

The Accord encourages all companies sourcing from Bangladesh to sign the renewed Accord and join our collective goal of safe and sustainable RMG and related industries.