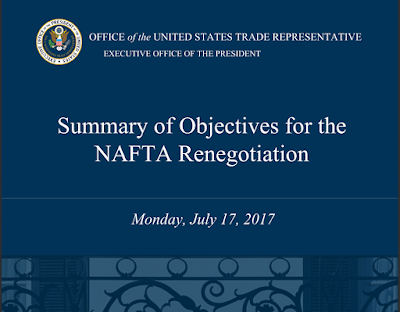 It was a long time coming, but recently the Office of the U.S. Trade Representative issued its Summary of Objectives for the NAFTA Renegotiation.

The Press Release and Table of Content and Introduction to the Summary of Objectives follow. A future post will discuss in more detail the approach to State Owned Enterprises in this package and its ramifications for trade deals with China.

Through the renegotiation of NAFTA, the Trump Administration will seek a much better agreement that reduces the U.S. trade deficit and is fair for all Americans by improving market access in Canada and Mexico for U.S. manufacturing, agriculture, and services.

In addition to President Trump being the first American president to begin renegotiating a comprehensive free trade agreement like NAFTA, for the first time USTR has included deficit reduction as a specific objective for the NAFTA negotiations. Since NAFTA was implemented in 1994, the U.S. bilateral goods trade balance with Mexico has gone from a $1.3 billion surplus to a $64 billion deficit in 2016. Market access issues have arisen in Canada with respect to dairy, wine, grain and other products — barriers that the current agreement is unequipped to address.

The negotiating objectives also include adding a digital economy chapter and incorporating and strengthening labor and environment obligations that are currently in NAFTA side agreements. Additionally, among other objectives, the Administration will work to eliminate unfair subsidies, market-distorting practices by state owned enterprises, and burdensome restrictions on intellectual property.

The negotiating objectives aim to apply the highest standards covering the broadest possible range of goods and services to ensure truly free and fair trade that supports higher-paying jobs and economic growth in the United States.

“President Trump continues to fulfill his promise to renegotiate NAFTA to get a much better deal for all Americans,” said Ambassador Lighthizer. “Too many Americans have been hurt by closed factories, exported jobs, and broken political promises. Under President Trump’s leadership, USTR will negotiate a fair deal. America’s persistent trade imbalances, break down trade barriers, and give Americans new opportunities to grow their exports. President Trump is reclaiming American prosperity and making our country great again.”

At the direction of the President, on May 18, 2017, Ambassador Lighthizer sent a letter notifying Congress of the Administration’s intent to initiate NAFTA renegotiations.

Since then, USTR has been conducting extensive consultations with Congress, stakeholders, and the public at large. USTR sought public comments, received more than 12,000 responses, and heard directly from over 140 witnesses over three days of public hearings. During this process, the Administration received valuable advice that directly impacted the development of the negotiating objectives.

Further, these objectives reflect the negotiating standards established by Congress in the Bipartisan Congressional Trade Priorities and Accountability Act of 2015 (TPA), which requires that USTR release objectives at least 30 days prior to formal negotiations. Negotiations will begin no earlier than August 16, 2017.

Through these negotiations, the Administration seeks an effectively implemented and enforced Agreement for more open, equitable, secure, and reciprocal market access. The Administration remains committed to conducting the negotiations with timely and substantive results for America’s workers, farmers, ranchers, and businesses.

The North American Free Trade Agreement (NAFTA) entered into force over 23 years ago, and since that time, the U.S. economy and global trading relationships have undergone substantial changes.


The America that existed when NAFTA was signed is not the America that we see today. Some Americans have benefited from new market access provided by the Agreement. It contributed to the linking of the continent through trade, while at the same time NAFTA provided much needed market access for American farmers and ranchers.


But NAFTA also created new problems for many American workers. Since the deal came into force in 1994, trade deficits have exploded, thousands of factories have closed, and millions of Americans have found themselves stranded, no longer able to utilize the skills for which they had been trained. For years, politicians promising to renegotiate the deal gave American workers hope that they would stop the bleeding. But none followed up.


In June 2016, then-candidate Donald J. Trump made a promise to the American people: he would renegotiate NAFTA or take us out of the agreement. As President, he immediately started work to fulfill that promise. The first NAFTA consultations began just a few weeks after the President took office.


On May 18th, President Trump became the first American president to begin renegotiating a comprehensive free trade agreement like NAFTA. At the direction of the President, and following more than three months of Administration consultations with Congress, U.S. Trade Representative Robert E. Lighthizer announced the Administration’s intention to renegotiate the deal.


Since Ambassador Lighthizer notified Congress of the renegotiation, USTR has been conducting extensive consultations with Congress, stakeholders, and the public at large. President Trump is listening.

The Trump Administration has held dozens of meetings to solicit advice and input. In addition, USTR sought public comments and received more than 12,000 responses. Finally, USTR held three days of public hearings on the negotiations and heard from more than 140 witnesses, who provided testimony on a wide range of sectors, including agriculture, manufacturing, services, and digital trade. During this process, the Administration received valuable advice which has directly impacted the development of the negotiating objectives.


Now, in accordance with section 105(a)(1)(D) of the Bipartisan Congressional Trade Priorities and Accountability Act of 2015, the Administration is providing this summary of specific objectives with respect to the NAFTA negotiations. These objectives reflect the valuable input received during the preceding consultation period from Congress, advisory committees, other agencies, and members of the public. USTR will continue to consult with Congress and stakeholders and we will update these objectives as we advance our work on these important negotiations.


Once negotiations begin, the Administration intends to ensure truly fair trade by seeking the highest standards covering the broadest possible range of goods and services. A successful renegotiation ofNAFTA will further the negotiating objectives of the United States, as described in this document, and will benefit the economies and populations of the United States and of our trading partners. The result will be a much better agreement for Americans.


The new NAFTA must continue to break down barriers to American exports. This includes the elimination of unfair subsidies, market-distorting practices by state owned enterprises, and burdensome restrictions of intellectual property. The new NAFTA will be modernized to reflect 21st century standards and will reflect a fairer deal, addressing America’s persistent trade imbalances in North America. It will ensure that the United States obtains more open, equitable, secure, and reciprocal market access, and that our trade agreement with our two largest export markets is effectively implemented and enforced. Under these objectives, a new NAFTA will give our farmers, ranchers, service providers, and other businesses new opportunities to grow their exports and reclaim American prosperity. But most importantly, the new NAFTA will promote a market system that functions more efficiently, leading to reciprocal and balanced trade among the parties.


If we succeed in achieving these objectives — maintaining and improving market access for American agriculture, manufacturing, and services — then we look forward to a seamless transition to the new NAFTA.