The Affair of the Sonic Weapons Attack: A Replay of Cold War Soviet Tactics And A Return to the Political Games of Our Leaders When Young Updated to Suit Current Interests? 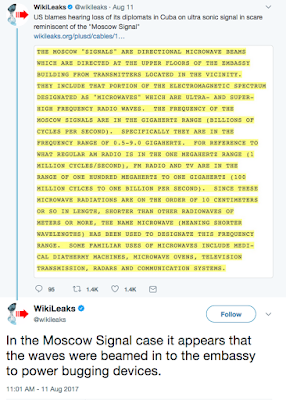 Since August of 2017, news media have sought to connect the Affair of the Sonic Weapons Attack in Cuba to the even more notorious Moscow Signal affair towards the end of the Cold War (e.g., here, here, and here). The object, of course, is to suggest both a plausible pedigree to the accusation and plausibility of harm.


The idea that Cuba had invented some never-before-seen sonic weapon always seemed like a stretch, given the general impoverishment of the island. It’s much more believable that this is a recycling of 40-year-old techniques pioneered by the Soviets. (John Sexton, Attacks similar to the ones in Cuba happened during the Cold War, Hot Air 13 Nov. 2017)

Indeed, the Americans have gone out of their way to signal the connection. "U.S. intelligence officials are closely studying Cold War-era Soviet technology as they seek to determine whether an electronic weapon was used to disorient and injure 24 American officials in Cuba earlier this year." (Ali Watkins, Cuba attack mystery may be Cold War flashback, officials say, Politico 12 Nov. 2017)-

But it is also to suggests that the old conditions that underscored the need for the Embargo have come back in place--that Cuba has again become an outpost of the Soviets (now Russians) in their aggressive moves against the United States and its interests.

In recent weeks the Government of Vladimir Putin indicated that they have plans to reactivate Russia’s military bases in Cuba. This initiative was proposed by the head of the Defense Committee of the Upper House of the Russian Parliament, Víktor Bóndarev, and the head of the Committee for the Defense of the Duma in the Lower Chamber, Vladimir Shamánov. (Elena Toledo, US on Alert as Russia Suggests Reopening Military Bases in Cuba, PanAm Post 13 Nov. 2017).

This return to old conditions has a modern twist as well--the connection between Cuba and Iran in a world in which the U.S. is more aggressively tilting toward Sunni Islam as Russia (along with Cuba) bets on Shia Islam. "The strengthened relations come as Iran and Cuba find themselves in the crosshairs of the new U.S. administration which has been increasingly hostile to both nations." (Cuba, Iran Strengthen Ties as Trump Menace Threatens Both). Though in Cuba's case there is an effort to serve as a bridge (Cuba-Saudi Arabia: The Threads of a Relationship of Convenience).

These choices would justify not merely an aggressive stance against the Cuban but also a return to Cold War relations with Cuba, including possibly the willingness to more openly seek regime change in Cuba. Yet in a way, for the ancient leaders of the United States and Cuba (and the old men in younger bodies within Russia), that return would be a relief as well--this is a state of affairs they know well and and well know how to operate (e.g., here).  For the rest of us, watching old men re-play the games of their youth is not merely pathetic (in the rhetorical sense of παθητικός) but also dangerous as well for the way it so easily appeals to the emotions of the masses (and their social media outlets), and for the way it appears to expose feelings that already reside in them and then manages them to a particular end.

The reminder of these events first broke at the end of August 2017, when the U.S. media briefly focused on the parallels between the evidence around the Sonic Weapons Attack and the earlier episodes in the Soviet Union.  With respect to the Soviet use of similar waves, "By the end of the 1960s, the intelligence community concluded that the Soviets were using the pulsed radiation to activate listening bugs concealed in the embassy’s walls, and not to control diplomats’ minds." (Sharon Weinberger, "The Secret History of Diplomats and Invisible Weapons: The alleged use of a “sound weapon” against U.S. Embassy officials in Cuba harks back to a Cold War medical mystery," Foreign Policy August 25, 2017). Recently Ms. Weinberger also noted that the U.S. investigation has led back to some of the people involved in the Moscow related attacks.  That report follows. (Pix from Elena Toledo, US on Alert as Russia Suggests Reopening Military Bases in Cuba,supra).

Last year, U.S. government personnel in Cuba began complaining of a variety of health problems: hearing loss, dizziness, tinnitus, vision issues, and cognitive issues, to name just a few. Some reported hearing loud noises or vibrations, while others reported nothing before their symptoms kicked in.

Initially, some suspected “sonic attacks” — low- or high-frequency sound waves—targeting diplomats, but they couldn’t find any devices that could cause such symptoms. Cuban officials denied any involvement in the incidents, instead blaming crickets and cicadas for the ailments, according to the AP.

No, this isn’t just a chapter in a sci-fi novel. To unpack the historical basis for this invisible attack, the E.R. turns to the time of the Soviet Union and the infamous “Moscow signal,” microwaves aimed at the U.S. Embassy in Moscow for two decades, beginning in the 1950s. Foreign Policy spoke to two former American diplomats who served in Moscow during this time.

James Schumaker is a retired foreign service officer with experience in the Soviet Union, Russia, Ukraine, Belarus, Afghanistan, and Yugoslavia. Glassman was chargé d’affaires in Kabul when the American Embassy in Afghanistan shut down in 1989.

Sharon Weinberger is FP’s executive editor for news. She is the author of The Imagineers of War: The Untold Story of DARPA, the Pentagon Agency That Changed the World. Follow her on Twitter: @weinbergersa.