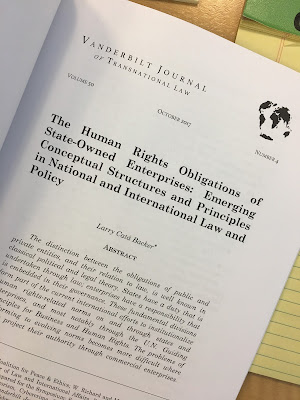 I am happy to announce the publication of "The Human Rights Obligations of State-Owned Enterprises: Emerging Conceptual Structures and Principles in National and International Law and Policy," which appears in the Vanderbilt Journal of Transnational law 50(4):827-888 (2017).  The article considers the way that classical conceptions of the state owned enterprise, and the regulatory structures created around them, have been changing in the context of globalization and the rise of business and human rights governance regimes. The analysis is built around the 2016 Report of the U.N. Working Group for Business and Human Rights and offers a set of ten challenges and recommendations for further development.  The recommendations and challenges suggest the ways in which issues of corporate personality, of sovereign immunity, and asset partitioning will be central to the development of the SOE as an object of law and governance within and among states.

The Abstract, Table of Contents and the Introduction follow.  The article can be accessed here. 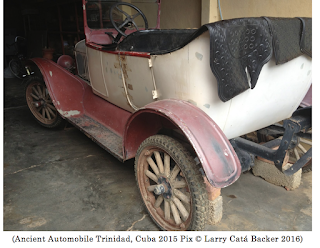 
Abstract: The distinction between the obligations of public and private entities, and their relation to law, is well known in classical political and legal theory. States have a duty that is undertaken through law; enterprises have a responsibility that is embedded in their governance. These fundamental divisions form part of the current international efforts to institutionalize human rights-related norms on and through states and enterprises, and most notably through the U.N. Guiding Principles for Business and Human Rights. The problems of conforming to evolving norms becomes more difficult where states project their authority through commercial enterprises. These state-owned enterprises (SOEs) operate where state duty and enterprise responsibility meet.

This Article takes a close look at the issue of the human rights duties of states as owners of SOEs, and of the responsibilities of SOEs for their own human rights related conduct. The form and substance of these duties and responsibilities are considered in light of three recent developments. The first is the increasingly prominent focus on SOEs as human rights-bearing institutions in international soft law and norms. The second is the substantial change in the direction of US policy in trade and globalization. The other is the maturation of Chinese outbound economic and investment policy, where its construction of an outbound nationalist globalization—the One Belt One Road policy—relies to some extent on the projection of commercial power through Chinese SOEs.

The Article offers a set of challenges and recommendations for further development. These recommendations and challenges suggest that issues of corporate personality, sovereign immunity, asset partition, and regulatory compartmentalization may well hobble the work of embedding human rights within the operation of states as owners and SOEs as public enterprises. To embed human rights more effectively in accordance with evolving international standards, it may be necessary to substantially change contemporary and backwards-looking legal frameworks within which SOEs now operate. Moreover, the Article demonstrates the shortcomings of the current strongly held consensus that the focus of regulatory governance must be grounded in and through a formally constituted enterprise, the SOE, rather than focusing regulation on economic activity irrespective of the form in which it is undertaken. Until these conceptual issues are considered, the effective regulation of SOEs, supply chains, and multinational corporations will remain elusive.