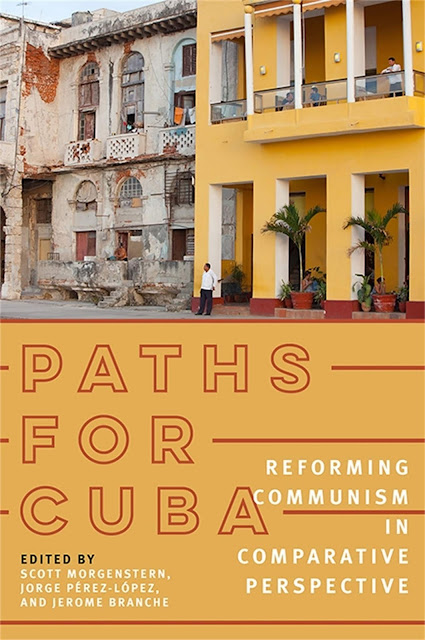 Here is the official blurb from the backmatter:

The Cuban model of communism has been an inspiration—from both a positive and negative perspective—for social movements, political leaders, and cultural expressionists around the world. With changes in leadership, the pace of change has accelerated following decades of economic struggles. The death of Fidel Castro and the reduced role of Raúl Castro seem likely to create further changes, though what these changes look like is still unknown. For now, Cuba is opening in important ways. Cubans can establish businesses, travel abroad, access the internet, and make private purchases. Paths for Cuba examines Cuba’s internal reforms and external influences within a comparative framework. The collection includes an interdisciplinary group of scholars from around the world to explore reforms away from communism.


The book is valuable for anyone interested in  understanding the power, triumphs and failures of the great and unfinished ideological experiment that commenced with the flight of Fulgencio Batista from Havana on the eve of 1959.

The table of contents follows:

1. Models of Economic Reform and Cuba's "Updating" of its Model
Scott Morgenstern and Jorge Perez Lopez, with Kevin Morrison and Carlos Alzugaray

6. The Cuban Communist Party on the Cusp of Change
Larry Catá Backer

7. The Prospects for Cuban Democracy in the Post-Transition Era
Aníbal Pérez-Liñán and Scott Mainwaring

9. The Future of Cuban Social Protection System and the Cuban Mirror
Javier Vazquez-D'Elia

10: After The Fall: Postcommunist Dynamics In Central And East Europe and Their Implications For Cuba
Ron Linden

11. The Living Lie and the Living Eye" Cuba's Reforms and the Racial Contract
Alan West-Durán