"The Sort of Democracy Worth Preserving and Safeguarding: Voting in the Orbits of Exogenous and Endogenous Democracy": Presentation PPTs Presented at the 4th National POC Legal Scholarship Conference 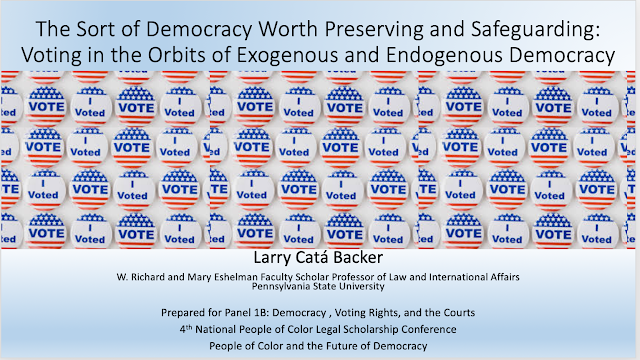 I am happy to post the PPTs of my presentation at the 4th National People of Color Scholarship Conference for its Panel on Democracy, Voting Rights, and the Courts. The slides follow below, along with the Conference abstract.

The paper touches on conceptions on voting and its relation to the ideologies of democratic legitimacy.  Happy to share the paper.  Please contact me for a draft.

Since the 1960s, there has been an almost singular focus on attaining and preserving the right to vote as a central element in the march toward deep integration into the U.S. polity. These battles continue in the contemporary context. This paper poses the question—is this effort far too narrowly focused on a particular vision of democratic participation? The paper argues that in the contemporary historical context, any singular focus on voting, and the principles of exogenous democracy that it represents, ignores an important alternative, endogenous, conception of democratic participation. Current historical conditions requires the reconsideration of theories of democracy (as concept and as institutionalized) that better reflects both the conceptual foundations both Western liberal and Marxist Leninist theories, and the national context in which each are applied. The paper starts by considering the value and limitations of traditional exogenous democracy, one performed through voting and founded around principles of representation. It then considers the possibilities of the value of a theory of endogenous democracy grounded in principles of accountability and consultation. It ends by suggesting why it is time to bring democratic principles into government; voting people into government is not enough. To that end it considers the way that endogenous democratic principles have emerged in other states and might be expanded in the United States. It provides a theoretical model that might serve as a basis for reorienting pro-democratic action from voting to the business of the apparatus of the state itself.