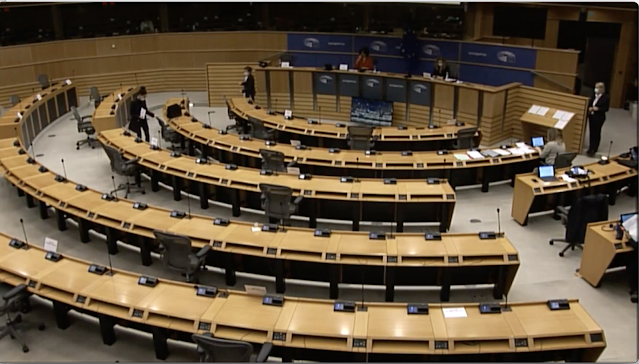 The Exchange is well worth watching. The tortuous process of creating that sausage that will be the draft of an International Instrument on business and human rights that is only then intended to serve as the basis for negotiation (now well contained, through the sausage shell casings of the draft proffered up in this way)  has yielded riches for students of the application of human rights to economic activities. Among a very strong group of presentations, I will focus on those of Carlos López, and especially that of Claire Methven O'Brien, whose proposal for an alternative to the current form of the draft legal instrument--a framework treaty approach--has substantial appeal.

The presentations provide much food for thought.  My observations follow. Links to the video of the event along with the important submissions provided by participants  may be accessed by clicking on the picture which follows.

1. The process of pre-negotiating a treaty draft that then serves as the basis for formal negotiation suggests both the anti-democratic character of the process itself, and the political-technocratic character of its construction (e.g., "ICJ considers the second Revised draft as a good starting point for negotiations which states should engage into without further delay." ICJ Statement (October 2020)). It shines a very bright light on the manifestation of power relations within the business of managing the human rights of business in ways that have become clearer in other respects over the years ("The Weak Underbelly of Business and Human Rights: Reflections on the 8th U.N. Forum on Business and Human Rights " Emancipating the Mind: Bulletin of the Coalition for Peace & Ethics 15(1): 11-50 (View HERE) ).

2. The ironies are of course palpable--a treaty project undertaken by a coalition of developing states with histories of bad relations with those to whom they have bartered away their national resources (usually to the profit of factions of domestic elites whoa are swept aside form time to time by other factions), academics with an ideological bone or two to pick, NGOs with a long term (and not unreasonable given historical engagement) with private approaches to regulation), and groups of people who remain committed to the dream of the establishment of a global common law of human rights in business built around international law and norms and enforced through the courts of like minded hegemons in North America and Europe (but not China--these elites are quite fussy in this way).

3. There was a time when groups thought that the interlinked global elites were moving in that direction and that the US courts would serve as the first international courts of human rights (including n business) through the internationalization of the US Alien Tort Claims Act.  But those hopes were frustrated. .Other systems have proven frustratingly slow in meetings the success thresholds satisfactory to these groups--even as it clear that corporate and investor cultures (always slow to change) are moving in the "right" direction. But then patience measured by the life spa of humans  never meets the impact measures necessary for the funding of international public and private organizations  who fund these endeavors.  Indeed, often understudied is the role of money in the funding and the construction of time horizons and strategies of groups all committed to advancing the embedding of human rights in economic activities but sometimes form vastly different starting points (see, eg HERE).

4. It has never been entirely clear whether the project itself is an act of revenge by some of its most committed stakeholders against what they believe might have been (charitably put) the pragmatic shortcomings of the United Nations Guiding Principles for Human Rights. It certainly has continued an ancient debate about the ideological foundations of contemporary globalization--one which favors markets driven and privatized approaches to the management of economic behaviors. And it might as well be the expression of another type of political revenge from developing states that see in the project a means of recapturing for themselves what they might view as the expropriation of the value of global production by the hoe states of the largest multinational enterprises that disproportionately (however that is measured) control global production and the distribution of its "profits."

5. The great paradox of the treaty--its largest lacuna--remains disturbingly oblivious to those who have devoted what feels like half a lifetime of productive activity to its realization: In the frenzy to extend international law to the private law based internal regulatory structures of global production chains managed through interlocking chains of entities organized along networks of ownership and control, the treaty leaves substantially untended the primary duty of states to protect human rights. States continue to engage in strategies of picking an choosing among human rights, balancing rights away, understanding human rights instrumentally as an expression of domestic political and economic ordering ideologies, ad the like. In the current state of international law generally, it will be quite difficult to achieve the uniformity of human rights standards applied to and by private sector enterprises where the public law superstructure is fractured.

6. This is not to suggest that the instinct toward treaty making in this context is wrong headed.  The constitutionalization and legalization of the private sphere follows that of the similar trajectories for public international organizations so well documents by José Alvarez (International Organizations as Law Makers) almost twenty years ago. Carlos López provides an excellent representation of that thrust in his able defense of the contemporary treaty process.  Within the parameters of its core premises, those arguments provide the most defensible basis for the current conceptualization fo the treaty--its challenges and objectives.

7. There are better initial approaches.  The Treaty could have aimed for much more modest goals--for example providing for a uniform international system of judicial remedy enforceable in the domestic courts of all state parties and subject to a uniform set of substantive and procedural rules.  That alone would have been a great advance. They could have aimed for the development of a centralized body for the production of transparent data and analytics which could be used to develop the sort of ratings and assessment systems which could then serve as the basis for the imposition of global systems of punishment  and rewards based on conformity to business and human rights expectations.

8. Another fruitful avenue, also substantially unexplored has been championed by Claire Methven O'Brien, Strategic adviser, Human Rights and Business, Danish Institute for Human Rights and Business. This approach is grounded in the idea--quite appealing--that most useful at this stage in the development of cultures of business and human rights would be a framework approach to treaty making.

Drawing on key contributions of the draft legally binding instrument to the construction of a structure for the development of traditional law based approaches to the prevention, mitigation and remediation of human rights harms, O'Brien produces a simple, clean, realistic, and objectives based pathway toward robust state participation through law to the creation of a human rights based framework applicable to economic activities.  (O'Brien, Claire. (2020). Draft text for BHR treaty June 2020).

It is not only appropriate, but essential, then, to seek to establish within the framework of the UN human rights system a universal normative platform to facilitate the evaluation and critique of the collective impact on human rights of the market sphere in its current configuration – and to shape and drive its better and stronger regulation in the pursuit of humanity’s common interests. (Methven O'Biren "The 2020 Draft UN Business andHuman Rights Treaty–Steady Progress TowardsHistoric Failure")

It is a pity that the current treaty project continues to insist on looking backwards towards the methods and objectives of a global order now much changed.