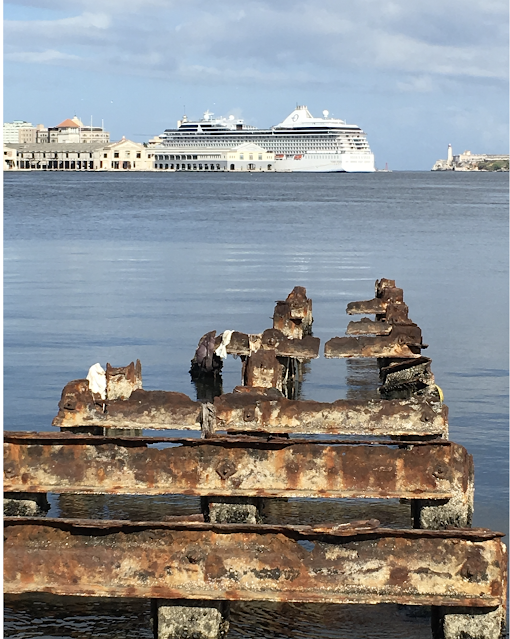 Among the suits filed was Havana Docks Corp. v. Carnival Corporation (USDC S Dist Fla; Case No. 19-cv-21724-BLOOM/McAliley) with related cases asserted against a number of other cruise companies (MSC Cruises et al. Case 19-cv-23588; Royal Caribbean Cruises, Ltd., Case19-cv-23590; and Norwegian Cruise Lines, Case129-cv-23591).  As one can imagine, lawyers for both sides have been aggressive in the service of their clients--lots more than money is at issue here. The current phase of the litigation began in September 2020, when the Defendant's pre-discovery motion to end the litigation  was denied (Havana Docks Corp v. Carnival Corp., Omnibus Order 14 September 2020).

Since then the parties have refined their arguments that produced ten (10) pending summary judgment motions filed in the four cases along with a number of motions for exclusion of expert opinions (and objections to the magistrate's report regarding those exclusion motions). The Court conducted a hearing on each summary judgment motion over the course of two (2) days (Havana Docks Corporation v. Carnival Corporation, No. 19-cv-21724, ECF Nos. [442], [449]). and then the decision:

In a consequential ruling Monday night, a Miami federal judge said four major cruise lines with South Florida ties — Carnival, Norwegian, Royal Caribbean and MSC Cruises — engaged in “prohibited tourism” and “trafficking activities” by carrying passengers to Cuba and profiting from the use of Havana port facilities confiscated by the Fidel Castro-led government, the first decision of its kind that could affect similar lawsuits. “By using the Terminal and one of its piers in various ways, Carnival, MSC SA, Royal Caribbean and Norwegian committed trafficking acts,” U.S. District Judge Beth Bloom concluded. (‘Prohibited tourism’: Miami judge deals major blow to cruise companies that traveled to Cuba). 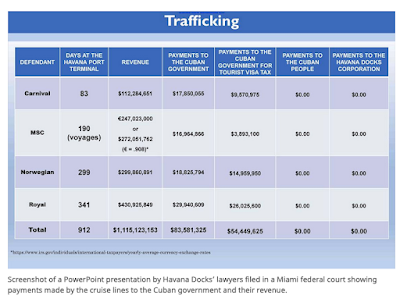 The case, Havana Docks v. Carnival Corp. et al, Case 1:19-cv-21724-BB generated a 169 page decision and omnibus order by Judge Bloom (21 March 2022). Though it is likely that there will be appeals, and the numerous decisions made in the course of the order may be re-examined, the opinion itself is an important  and sometimes powerful exposition not merely of the law (the interpretation of which is now being (re)shaped) but also of the context in which that interpretation is undertaken,  In the process the order provides an important glimpse into the way in which the judiciary's good faith efforts to apply law within ideological constraints.

Among the most important considerations in this respect is the way in which the Courts approach the interpretation of the statutory measures.  Here that interpretation is impossible in the absence of a determination of the character of the underlying objectives and legislative determinations that in the aggregate reflect the legalization of a political position which is then to be undertaken through the courts and around the management of the legal consequences of economic activity over a very long arc of time. This is not to say that the approach is either "right" or "wrong"--clear that determination is a function of the ideological foundation from within which it is possible to develop a legalized superstructure and then to project that superstructure onto the management of economic activities to be undertaken and sorted through private dispute resolution of public policy objectives.

The Decision maybe accessed HERE.  It is part of the Coalition for Peace & Ethics Litigating Cuba Project.  The Decision table of Contents follows. 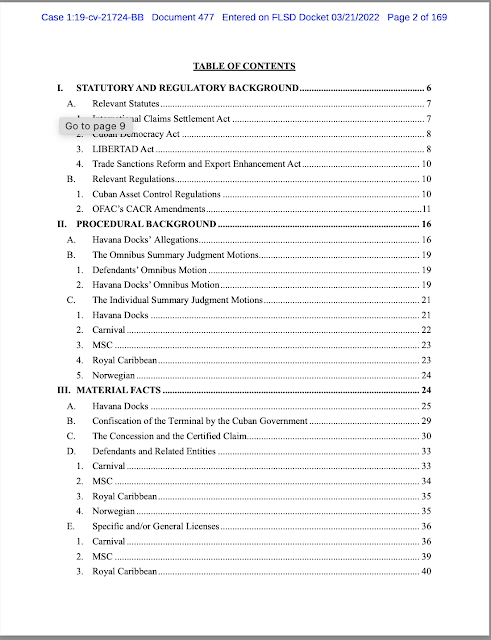 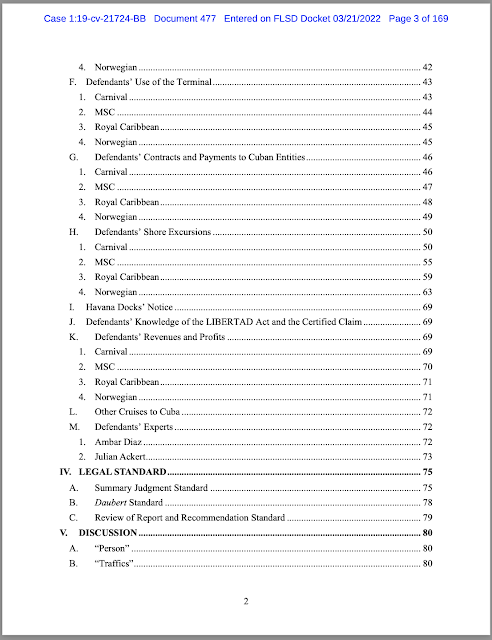 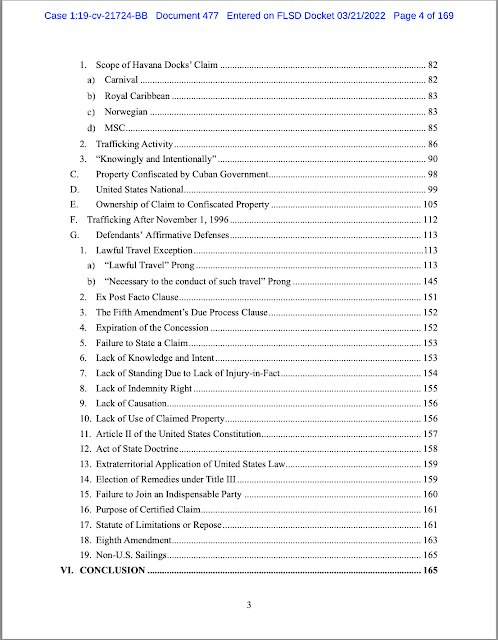