"Vaccine Mandates and Religious Exemptions: What Could be Controversial?" A Discussion Sponsored by the Penn State Law Federalist Society--Video Recording Now Available 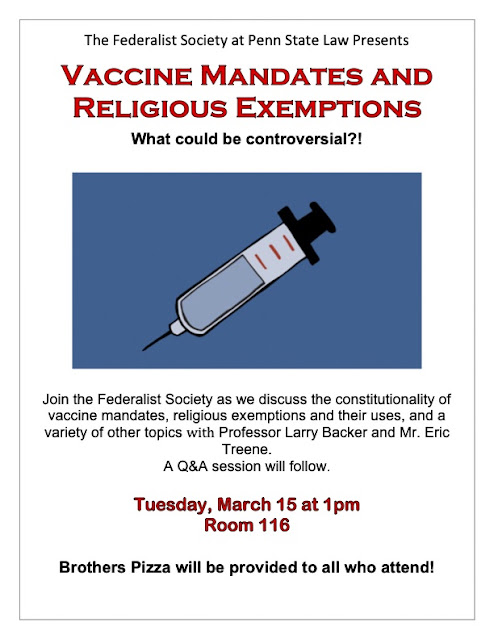 Vaccine Mandates and Religious Exemptions: What Could be Controversial?
The Penn State Law Federalist Society sponsored a conversation discuss the constitutionality of vaccine mandates, religious exemptions and their uses, and a variety of other topics with Professor Larry Catá Backer and Mr. Eric Treene. The object of discussion was generally the emerging framework of exemptions under Constitutional and statutory Free Exercise principles as they might be applied to the authority of the US military to mandate vaccination. The specific discussion centers on Austin v. U.S. Navy Seals (2022) now hovering within the Supreme Court's shadow docket (for press coverage see here and here). The discussion was arranged around the following subtopics: 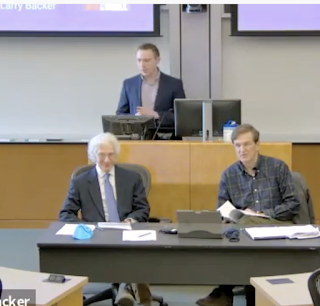 1. Nature of the Claims: Are the claims religious, or are they really general autonomy claims? Are some of the claims religious and others not? Are they sincere? Difficulties with reviewing sincerity. What does broadening the definition of what is religious do to general support in our polity for religious claims?

2. Free Exercise Claims: Why would strict scrutiny apply to any of these claims? Does giving a medical exemption make these claim non-generally applicable? What of the discrimination argument that Justice Gorsuch made about the NY law and the governor’s views?

3. Religious Freedom Restoration Act (RFRA): Navy Seals cases; you get to strict scrutiny fairly easily, but doesn’t the military have a compelling interest?

4. Title VII: What is a reasonable accommodation in this circumstance? What is an undue hardship on employers? How does the invalidation of the employer mandate impact the analysis.

The general consensus was that the vaccine mandate challenge as presented by the Navy Seals would likely prove to be a  difficult case for the court, should it ever reach the merits or generate opinions in the course of its consideration of those matters that do reach them. The case is rich with contentious issues at the heart of the now generation long campaign to bring down the wall of separation (Everson v. Board of Education, 330 U.S. 1 (1947)) and the primacy of Establish Clause principles in favor of a Free Exercise privileging jurisprudence of neutrality suitable for an advanced administrative state unable to keep its regulatory fingers from virtually any aspect of societal conduct. In the context of Free Exercise, these issues include the quite thorny ones of testing sincerity of belief, the the application of tests of general applicability, religious animus, compelling interest, and least restrictive means. The speakers hinted at the broad range of challenges in the structuring of their comments. It will require the justices to balance deference to the military decision making and the growing broadening scope of protection for free exercise claims.  Further, that balancing will have to be undertaken either under the developing statutory jurisprudence (from the genesis of its operational principles in Gonzales v. O Centro Espírita Beneficente União do Vegetal, 546 U.S. 418 (2006)), or may touch on potentially substantially changes to the constitutional standards which have remained relatively undisturbed in this context for a "longish" time (eg,  Church of the Lukumi Babalu Aye, Inc. v. Hialeah, 508 U.S. 520 (1993)). Both of these strands will then be balanced against the duty of the executive to oversee the preparedness of the military forces with respect to which the Court has traditionally deferred (Goldman v. Weinberger, 475 U.S. 503 (1986)). On the other hand, the majority of justice may be induced to treat this as yet another species of the assuatl of the autonomy and scope of discretionary authority of regulatory agencies to which one was treated in the COVID cases earlier decided (Biden v. Missouri, Nos. 21A240 and 21A241 595 U. S. ____ (2022) (13 Jan 2022); and  National Federation of Independent Business v. OSHA, Nos. 21A244 and 21A247, 595 U. S. ____ (2022) (13 Jan. 2022)).
And over all of the, perhaps, the specter of Justice Scalia, animated in the last pages of the opinion in  Employment Division, Department of Human Resources of Oregon v. Smith, 494 U.S. 872 (1990), now hovers (as might Reynolds v. United States, 98 U.S. 145 (1878)).  The event was held at Penn State Law, State College, PA 15 March 2022.
The video recording of the discussion is available HERE.
Posted by Larry Catá Backer at 3/19/2022 01:37:00 PM