Report of the European Law Institute: "Business and Human Rights: Access to Justice and Effective Remedies (with input from the EU Agency for Fundamental Rights, FRA)" 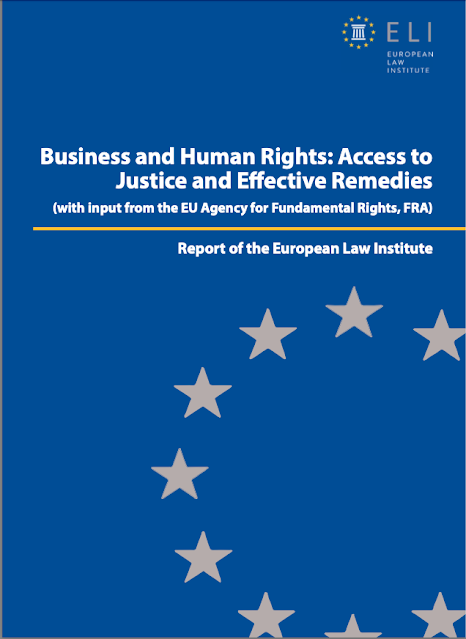 States, substantially unable to confront the failures of their duties to protect human rights directly through their constitutional legal orders, have found in the governmentalization of the private sector (a consequence of a further failure to confront governance gaps within global production chains) a far more fertile space  ripe for the sort of legalization that places them (the state) one step removed from any real actualization of their own duties and their own responsibilities for taking seriously the normative structures of their own constitutional orders.

This is the set of core premises around which much of the work of the regulation of business and human rights has been developing since 2014.  The two animating premises are these:

(1) in the face of insurmountable governance gaps and in the face of the strength of global production chains to define governance orders, it is necessary to accelerate the process of the privatization of governance and the governmentalization (through compliance and accountability measures) of markets; and

(2) That resulting governmentalization must be brought back under the umbrella of state supervision through its legalization through which the state becomes a critical but second order actor in the regulation of the human rights effects of economic activity.

That is the deal.

It is in furtherance of that deal that a host of efforts have acquired substantial traction among the leading forces in the business, human rights, and sustainability communities. All are focused on the governmentalization (in the form of transposing the sensibilities of administrative organs) of the second Pillar of the UN Guiding Principles (the corporate responsibility to respect human rights) whether in the form of a treaty project, a remedial project, or a project advancing the legalization of human rights due diligence across global production chains. Of these, the remedial project has the most promise for bridging the divide between a state direct and its supervisory duties to protect human rights.

This is not to suggest that the project undertaken is of little merit, will have negligible effect, or is not useful (depending on how one measures utility). It is however to suggest that in the long run this focus tends to distract the state from its core duty to protect human rights as a direct and primary obligation. State managerialism is important, to be sure, and the effort ought to be appreciated for its contribution, indirectly, to the integrity and comprehensive legitimacy of markets and markets driven activity.  But it is a developing periphery of human rights management that is being built around a hollow core.

This is the context in which it may be useful to consider (as both a positive development given its objectives, but with caution given the longer term ramifications described above) a quite important  consideration of the remedial project itself. In its recently released Report "Business and Human Rights: Access to Justice and Effective Remedies (with input from the EU Agency for Fundamental Rights, FRA)" the European Law Institute, an independent non-profit organisation established to initiate, conduct
and facilitate research, make recommendations and provide practical guidance in the field of European legal development, sought

to identify a range of possible regulatory and/or soft-law options, both at Member State and at the EU level, intended to increase access to remedy in the EU and ensure corporate human rights compliance. The Report refers to ‘rights’ in a broad sense so as to encompass all internationally recognised human rights, including those sanctioned in international human rights treaties as well as in regional instruments such as the European Convention on Human Rights and the EU Charter of Fundamental Rights. The relevant impacts include all types of business-related human rights violations. When not otherwise stated, the Report refers to undertakings of any size and sector based in the EU, as well as to undertakings  established in non-EU countries that operate in the internal market of the EU selling goods or providing services. ("Business and Human Rights: Access to Justice and Effective Remedies" supra at 7).

The Report builds on all the strengths and is hobbled by the challenges, of legalizing the transnational private sector across borders.  And yet the five thematic chapters--(1) human rights due diligence; (2)collective redress;  (3) private international law; (4),additional pathways; and (5) action/transparency. All are important--but the materials on issue of private international law merit special consideration (Report pp. 44-62). They raise and engage in critical issues that have become central to the development of remedial pathways within the traditional jurisprudence of host and home states.  They also implicate a number of core issues of jurisprudence relating to the reach and authority of courts, the detachment of remedy from territory, and the development of judicial and statutory approaches to duty in complex interlinked activities among autonomous juridical persons engaged in a common economic project. These are all issues worth more detailed treatment and they are already well embedded in emerging judicial opinions.

The Executiver Summary, Table of Contemns and Recommendations from the Report follows. 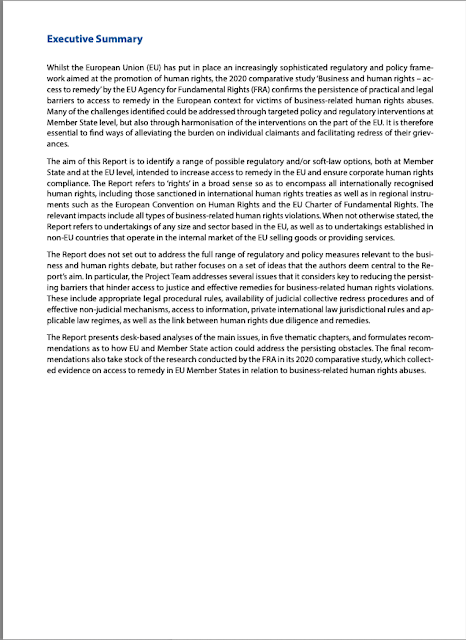 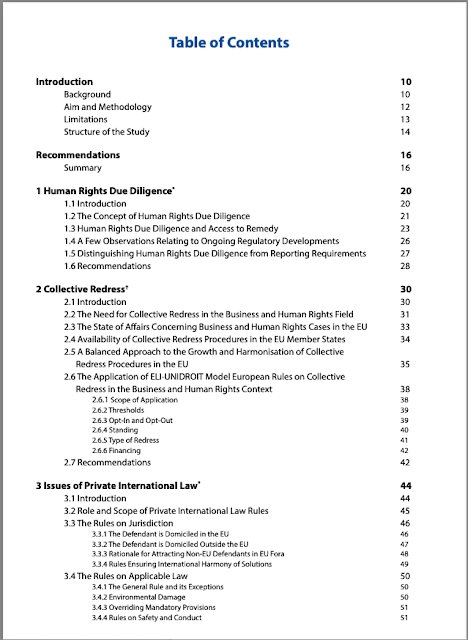 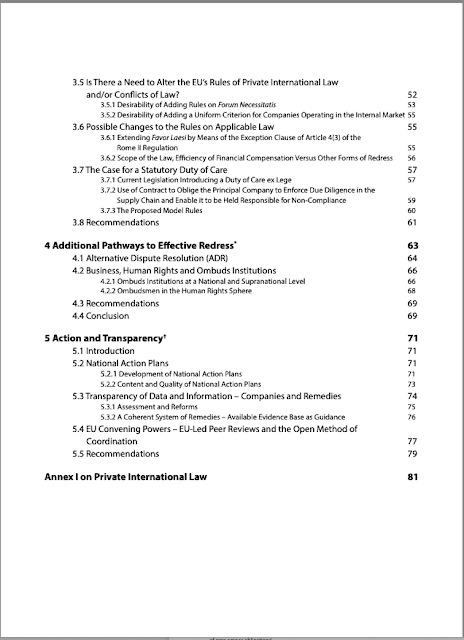 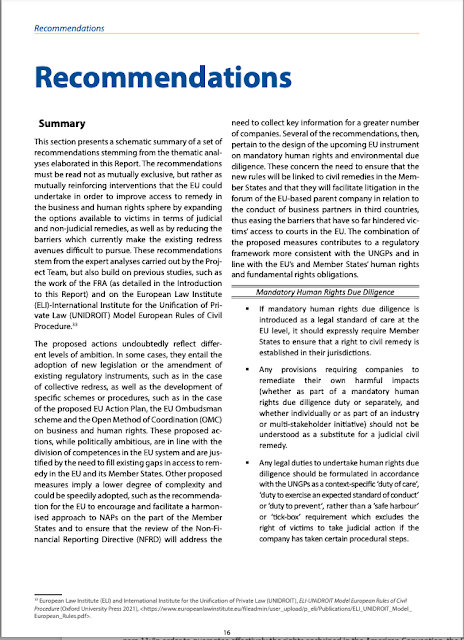 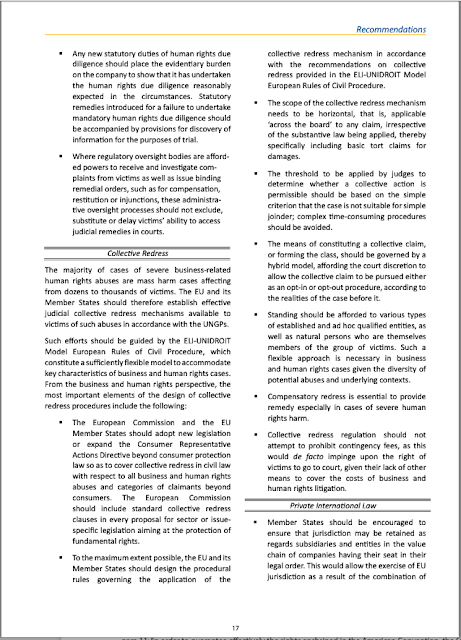 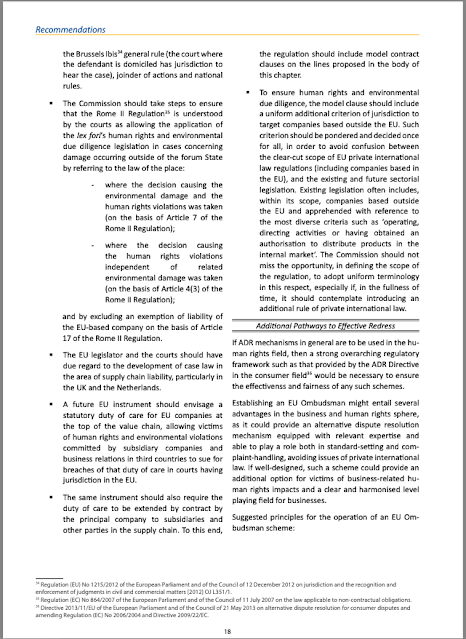 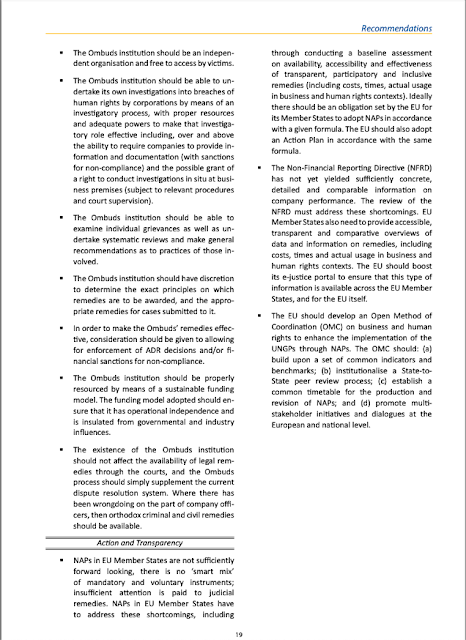