The Socialist Multinational in Global Context: My Presentation at the International Conference--Cuba Futures: Past / Present 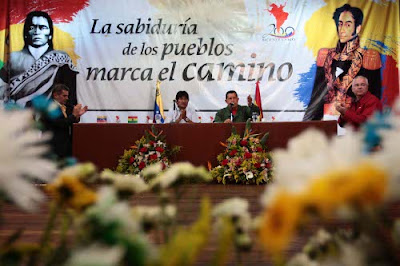 John Devereux provided the results of an on going study of  Cuban living standards over the last century.  The object was to determine what insights could be  derived about the success of a Marxist Revolution in a country with one of the highest standards of living in Latin America at the time.  The answers, so far were intriguing.  Devereaux placed Cuba within a global matrix for comparison and showed the extent to which Cuban living standards in the 1920s were substantially above some European countries and many in Latin America.  He also showed the precipitous drop in living standards from the end of the 1920s, a drop from which Cubans were still recovering near the end of the 1950s.  That long slow recovery might have played a role in the way in which ordinary Cubans saw the world and affected their taste for change in 1959.  Frank-Christian Hansel presented a more theoretical perspective tied to an emerging theory of property.  The paper suggested the need and form of the sort of realignment of concepts of property, ownership and control necessary for development in Cuba.  The great insight of this approach was its possibility for substantial development without the need for outside capital, something that might be of interest to Cuba in particular, and developing states in general.
Sarah Blue and I focused on the same activity--Cuba's organized efforts to export medical services abroad, Cuba's medical internationalism--from very different, and perhaps complementary, perspectives. Professor Blue focused on what might be understood as the micro perspective.  She examined both the outbound and inbound organization of the export of medical services on doctors.  She examined the pay structure, the differentiation in pay rates as a function of receiving states, the reputation of these programs among doctors.  She noted the importance of the pay differential for participating doctors and its incentive effects.  She examined the characteristics of doctors who are more likely to participate.  She also examined the effect of these programs on recipient states.  The picture painted was of a program that appears to do substantial good at thew state to state level for the delivery of important services to primarily developing states. This is a program that does good. 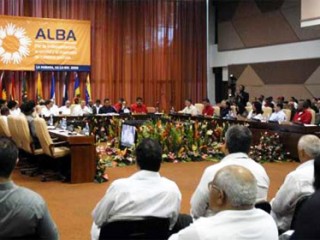 (From ALBA acelerará proyectos, empresas grannacionales, Dec. 14, 2009).
I focused on what might be viewed as a macro perspective. Rather than focus on the  value of the value of the medical export system, I focused on  the relationship of Cuban doctors terms of employment in relation to the enterprise that rented their services to other states.  The foundation of that review was an ideological framework that rejected the basic presumptions of a market based globalization.   I suggested that two systems have grown up simultaneously side by side.  On one side one has the emergence of a new effort to create a system of economic multilateralism and globalization grounded in state power and state directed commercial activity that rejects the basic parameters of conventional economic globalization.  On the other there has begun to emerge global systems of business and commercial conduct grounded in respect for a set of human rights norms that have become institutionalized in hard and soft law governance systems. These include not only international standards memorialized in conventions or customary international law, but also in the soft law frameworks of the OECD's corporate governance framework and the developing U.N. business and human rights General Principles from its "Protect-Respect-Remedy" framework. The rental of Cuban doctors, Cuba's medical internationalism,  abroad provides an example of a place where the two systems may both meet and conflict.  It is that conflict that was then explored. 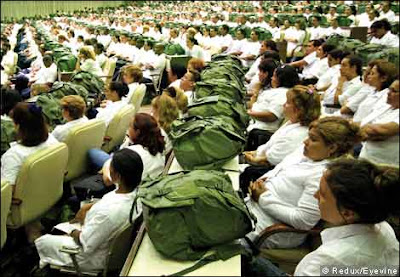 (From Andrew Jack, Cuba's Medical Diplomacy, FT Magazine, May 15, 2010; "Cuban medical personnel assembled and waiting to assist Louisiana after Hurricane Katrina; the US did not take up its neighbour’s offer of help.")
The paper was entitled: Globalization and the Socialist Multinational: Cuba and ALBA’s Grannacional Projects at the Intersection of Business and Human Right.


Abstract: The socialist multinational represents a effort to find a new way for states to engage in globalization by creating a vehicle for more directed state intervention in economic markets using a form distinct from the traditional model of state owned enterprises. This paper considers recent to Cuban led efforts to develop new forms of state-owned multinational enterprises and the potential conflicts between these entities and the emerging rules for international business behavior, especially those touching on business and human rights. The paper starts by discussing the basic theory and objectives of the grannacional generally, as a new form of transnational public enterprise, one that is meant to provide a viable challenge to current conventional global systems of economic organization. These ideas have been articulated as the “concepto grannacional” being given effect through the inter-governmental arrangements of the Alternative Bolivariana Para los Pueblos de Nuestra América (ALBA). Grannacional economic activity, ideologically based, is divided into two categories. The first, proyectos grannacionales, are inter-governmental in character. These include enterprises targeting education, tourism and the provision of medical services. The second, empresas grannacionales, focus on the creation of entities controlled by ALBA states and geared to the production, sale and distribution of goods. It then focuses on a specific grannacional related project--the Misión Barrio Adentro (MBA), a socio-political barter project in which Cuba exchanged doctors and other health field related goods and services under its control for Venezuelan goods, principally petroleum. For Cuba programs like MBA have served as a means of engaging in economic globalization and of leveraging its political intervention in the service of its ideological programs in receptive states like Venezuela. It has also provided a basis for expanding Cuba’s commercial power by permitting large scale state directed barter transactions. But when bartering involves labor as well as capital, the fundamental premises of the ALBA system—and Cuban ideological notions of the fungibility of labor and capital in the service of the state—may collide with emerging global frameworks for human rights and economic activity. That collision is examined against recent litigation in the United States which Cuban labor barter transactions have been alleged to constitute forced labor in violation of international law, the use of international standards to impose liability on third party corporations on a complicity theory, and the application of soft law frameworks against the ALBA states and complicit third country entities. The paper concludes that these emerging forms of economic enterprises, like related public ventures into private markets pose substantial political and legal issues at the intersection of public, private, national and international law. Global human rights norms, then, might confine grannacional activity to the territory of the sponsoring states more effectively than any sort of politically motivated embargo.

The POWERPOINT of the presentation may be accessed here.