Boasteel and Corporate Social Responsibility on the Ground in China

What follows are notes of his trip with a focus on Baosteel's CSR operations from the view of a visitor.


Baosteel may be of particular interest because of its aggressive efforts to horizontally integrate its operations worldwide, including in the Western Hemisphere.

As an important window for Baosteel to develop overseas businesses in America, Baosteel America Inc. has energetically promoted the marketing in America of iron and steel products and auxiliary products of all subsidiaries domestically produced and has taken the initiative to introduce advanced iron and steel production control technologies and equipment of foreign countries to those companies. While actively expanded the trade of iron & steel products relying on the Baosteel's integrated advantages, Baosteel America Inc. is also a brisk agent and con- sultant for foreign firms to participate in the equipment engineering project of Chinese Metallurgical Industry.

Baosteel America Inc. is working with perseverance to become a bridge and a information platform linking iron & steel enterprises and the upper and down-stream enterprises, provide quality services to the users and pursue for a bright future of win-win. (Baosteel America, Company Profile).

Its CSR cultures, then, will have global implications.

I joined with an embedded program (BUS596—Understanding China) with the Pennsylvania State University Harrisburg Campus to visit Shanghai, Xian, and Beijing. This program is designed to introduce the history, economy and political culture of China as the country is playing an ever-growing role in worldwide globalization. Several presentations were given by American corporate as well as Chinese state-own corporate in order to understand corporate culture and governance as well as opportunities American corporate see in this influential country. Through our visit with these corporate and multiple cultural heritages, I gained a better understanding of China’s history and role in contemporary world events and its place in Chinese society today. These aspects strong reflect on China’s evolving “market socialism” economy and how it impacts Chinese society and globalization. I will focus more on my experience with corporate visit in this briefing. We visited a total of five corporate in China—Shanghai Baosteel Group Corporation, Xi'an Xiwei Control Motor Factory, Beijing Shunxin Agriculture Co., Ltd., TE Connectivity, and the Hershey Company.

The Baosteel visit was my main objective of the trip to China as it would bring invaluable insight to my research on the Chinese steel industry with particular emphasis on the role of the this state-own corporate within the Chinese and international industries. The visit was a bus tour within the Baosteel manufacturing site with a walking tour in one of the plant. Although I was expecting a seminar formant of presentation, I still received some good information about Baosteel’s corporate governance and its challenges with international partner via conversations with one of the personnel from the public relations department. Our conversation mainly regarded the following three areas: labor, challenges with international partners, and environment.

The manufacturing line in Baosteel that was visited is mainly automatically operated. The representative explained that since the manufacture process is automatic, the corporate laid off a good number of staffs in recent years and is not in hiring process. Baosteel is currently staffed with over 100,000 employees. The staffs that were laid off were able to get compensation from the government and the company, and some were re-trained for other positions. Since the plant has to be maintaining operational, it required staffs in a 24 hours period. Therefore, Baosteel employees are on three 8-hour shift, and thus they hardly ever work overtime.

Baosteel has international partners worldwide for technology import as well as for mining and trading. The technology of the manufacturing line we visited was imported from Mitsubishi Heavy Industries as well as one Chinese company. I raised a question on the specific challenges Baosteel usually faced when working with international partners. The representative from Baosteel briefly mentioned a few challenges mainly related with corporate culture and other cultural issue in general without specifically explain neither what they were nor the solutions on the issues. I also raised another question regarding developing, or ground breaking, a mine in foreign counties, specifically in Australia since I read that Mitsubishi Heavy Industries recently invited Baosteel to develop a mine in the country. As mining development will cause different kinds of damage to the environment and result in many other related issues, it would be interesting to see who would be responsible for the aftermath, Baosteel, the partnering company, or the local government. Nonetheless, no answer was given to the questions except some general responses unrelated to the question.

In regard with environment protection, the representative from Baosteel proudly explained that the corporate was awarded one of the best in China with an environmental management plan. Indeed, there were many trees planted in the manufacturing site as if it is an artificial forest in order to control the air quality. The area was even granted the nickname of “City of Trees”. Furthermore, the corporate keeps around 400 deer in the Baosteel area to prove that the air quality is good and safe enough that even wild life can survive. During my preliminary research, I did read in Baosteel’s CSR report that tree planting is one of the most important strategies in managing environmental issues. However, the real environment protection strategic plan in most other companies, mostly in the west, would focus more on practical issues such as reduction of emission gas and so on. What I found interesting was that it sounds like planting trees is the number one strategic plan in dealing with environmental issues in Baosteel.

During the visit to TE Connectivity and the Hershey Company, I learned about the opportunities American corporate see in China as well as challenges when conducting business in China. The class was greeted by Mr. Gordon Hwang, who is the Senior Vice President, China, when visiting TE Connectivity. We were shown a couple presentations in regards of the economic growth and market in China. However, the presentations neglected some other risk factors as well as misguided the scenario. First of all, when percentage is taken as account, the amount of population needs to be taken as consideration as well. China is still at the developing stage. The rate of growth has to be greater other U.S. partners who has already developed such as Japan and South Korea. In addition, the political risk factors between the United States and China also need to be taken as consideration. On the other hand, while at the visit in the Hershey Company, I raised a question in regard of corruption in China and how Hershey would response in case it happens when dealing with Chinese counterparts. Corruption is indeed one of the biggest challenges in conducting business in China, and as a foreign investor, Chinese central government and the Shanghai government will usually protect Hershey. Nonetheless, Hershey still has to deal with the local government, especially custom, after all. In case of corruption happening in dealing with its Chinese counterparts occur, Hershey would follow its protocol and guideline in reporting the issue in order to protect the company as well as the personnel in China. 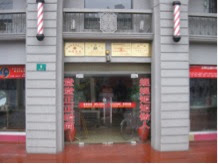 The slogan says, “Conduct Business Righteously, Live Under the Guidance of Regulations” 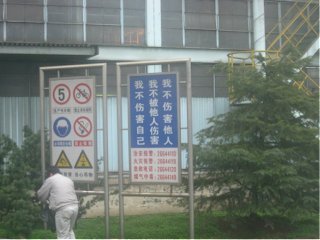 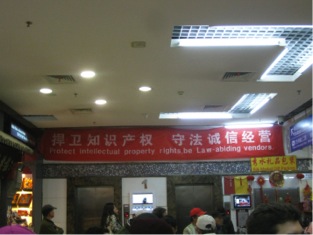 “Banners at the Silk Street & Pearl Market in Beijing, which sell  goods"