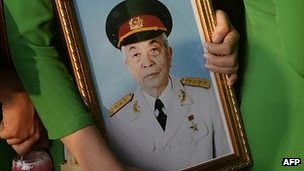 General Giap's most famous victories are far back in the past. He lost many battles too, but understood the power of national pride in an old civilisation humiliated by colonialism - that people would endure colossal sacrifices for the goal of independence. The outpouring of emotion for this ruthless, idealistic general is in many ways driven by nostalgia for the values of that simpler age of heroic struggle, so unlike today's Vietnam. (Jonathan Head; Analysis,  BBC News, Hanoi, from Vietnam holds state funeral for General Vo Nguyen Giap, BBC News Online, October 12, 2013)


That contrast was emphasized by some press reports. "The Communist Party would like Gen Giap's death to remind the Vietnamese of its role in fighting for national liberation, he adds, but it will also bring home to many just how far a party tainted by corruption and nepotism has fallen from the ideals it once espoused." Vietnam holds state funeral for General Vo Nguyen Giap, BBC News Online, October 12, 2013.

But beyond the contrasts between the struggles of Vietnam's revolutionary period and contemporary Vietnam, Giap's legacy should be understood as centered on his ability to refine the ideal of "total war" first suggested in a limited way by the principal combatants of the Second World War into a concept that could be used to redefine the strategies and parameters of warfare into the 21st century.  Most important, in this respect, was Giap's influence on the ability of non-state actors to participate in warfare as effectively as well equipped states. That might explain strategic interventions from the al-Qaeda's strategic choices to the efforts of Edward Snowden in the development of a global strategy to attack the power of states.  (e.g., Ruminations 50: Edward Snowden and Polycentric Global Governance Orders Beyond the State).

To that end, this post includes an Interview with Giap (PBS Series on Guerrilla Wars (RealAudio Excerpt)) and  the argument of Michael W.S. Ryan, "The Jihadist Legacy of Vietnam’s General Vo Nguyen Giap," The Jamestown Foundation, October 15, 2013.