Xi Jingping has been moving aggressively to reform the operations of the Chinese Communist Party over the last year. Particularly important has been his efforts to bring politics back into the CCP and to assert, in a more public and open way, the leadership role of the CCP in the eveolution of the principles and rules through which  the political, social, and economic goals of the Chinese state are to be realized. 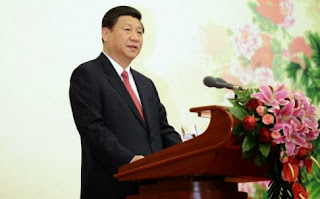 To that end, it has been necessary to confront the issue of corruption within the CCP, and to an equal extent, its reflection in the action of administrative officials  at all levels of government. The CCP indicated the importance of this issue in Hu Jingtao's last Report to the 18th CCP National COngress in November 2012.


And the whole Party is confronted with increasingly grave dangers of lacking in drive, incompetence, being out of touch with the people, corruption and other misconduct. We should steadily improve the Party's art of leadership and governance; and increase its ability to resist corruption, prevent degeneration and ward off risks – this is a major issue the Party must solve in order to consolidate its position as the governing party and carry out its mission of governance. (Hu Jingtao, Report to the 18th CCP National Congress, Nov. 2012, at Part XII).

Now we begin to see some of the manifestation of this work of developing institutional structures to strengthen the CCP apparatus and better discipline its cadres. This post provides a report by Shan Gao, an SJD candidate at Penn State's Law School of some of the most recent efforts to institutionalize CCP anti-corruption efforts.

· Select citation of new Measurements of the Conference Budget Management

As part of lager anti-corruption campaign by China’s new leadership, the opening of new website for China’s Anti-Corruption agency was a big thing in the eyes of Forbidden City. The national evening news program spent 3 minutes detailed explained the function of this website to nationwide audience. Moreover, the Secretary of Central Commission for Discipline Inspection and one of the nine members of the Politburo Standing Committee, Wang qishan personally visited the headquarter of the new website for China’s Anti-Corruption agency[1]. All these facts signaled China’s new leader’s ambitions on cracking corruptions. From personal inspection of China’s daily news, for the past 6 months, news on the fall of high level officials had higher frequency than before. Also, the number of criticisms as well as severity of the tone in those criticisms had significant decreases. For China’s observers, the new face of China’s Anti-Corruption agency website and other anti- corruption measurements are worth for us to take a look: 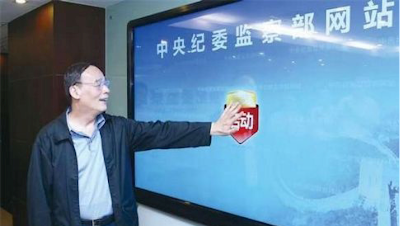 (Pix: Wang qishan, members of Politburo Standing Committee visiting the headquarters of the new anti-corruption website, he pushes the bottom on the screen to initiate the system on Steeper 2 http://blog.cntv.cn/9370117-4511226.html)

Note: the top left reads: Central CPC Commission of Discipline and Inspection with the Party logo, the right top reads: Ministry of Supervision with state logo. This website could be accessed through two domains. One is “www. ccdi.gov.cn” CCDI is the abbreviation of Central CPC Commission of Discipline and Inspection. The other domain is “www. mos.gov.cn” MOS is the abbreviation of Ministry of Supervision. The design of the website, two domains and the organization and operation of this anti-corruption agency all perfectly indicated the characteristic of Chinese Anti-corruption framework under China’s unique Party-State system.


Based on the information provided by the new website, Central Commission for Discipline and Inspection and Ministry of Supervision are working together as one aggregate unit for China’s anti-corruption issues. Prior to the establishment of PRC, Central Commission for Discipline was created in 1927 by CPC’s 5th Annual congress to deal with Party corruption issues. The Ministry of Supervision, on the other hand, was created much later after the fall of Gang of Four by the 6th Standing Committee of National People’s Congress in 1986.[2] The Ministry of Supervision I mainly dealing with government employee’s corruption issue under the leadership of State Council. Although these two institutions had its own specification and jurisdictions, in 1993 the Central CPC and State Council jointly agree to incorporate with each other as one unit and keep their original institution structure[3]. The following diagram from the website indicated the structure after their merge. As you can tell from this complex diagram, CCDI & MOS is basically consisted by three branches. The Internal Agency is the main agency that dealing with the investigation: 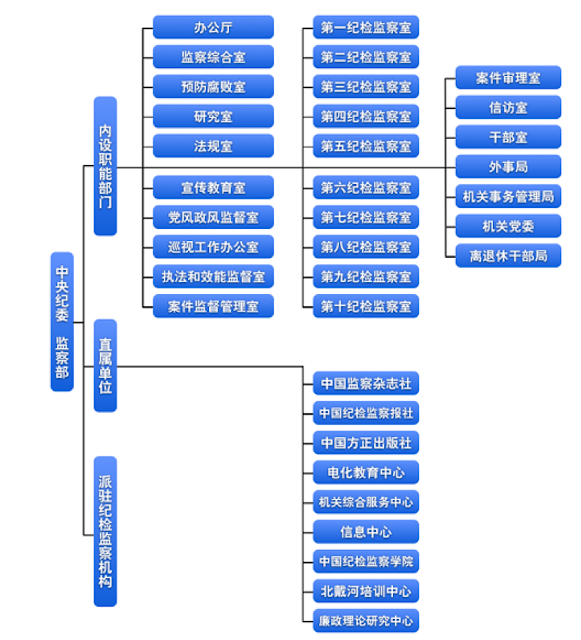 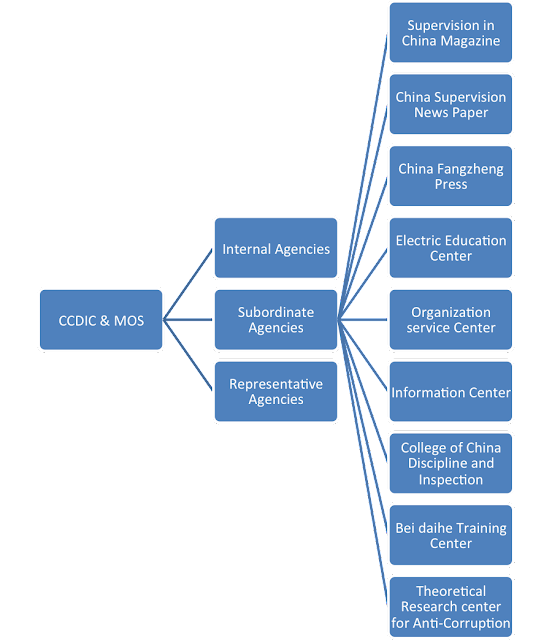 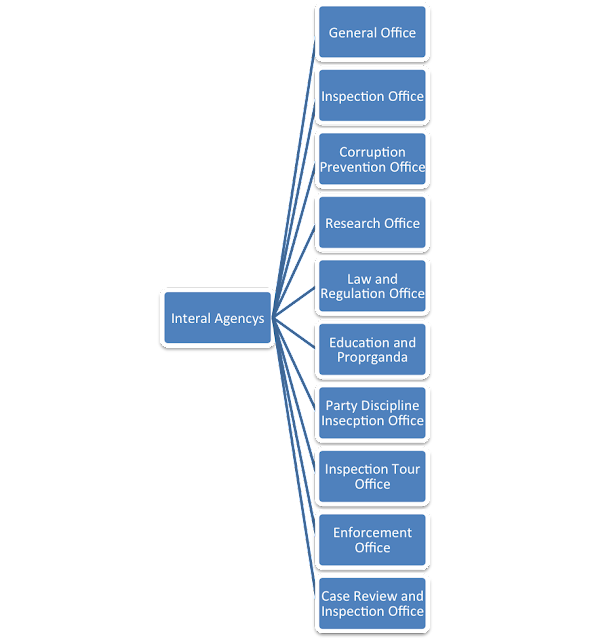 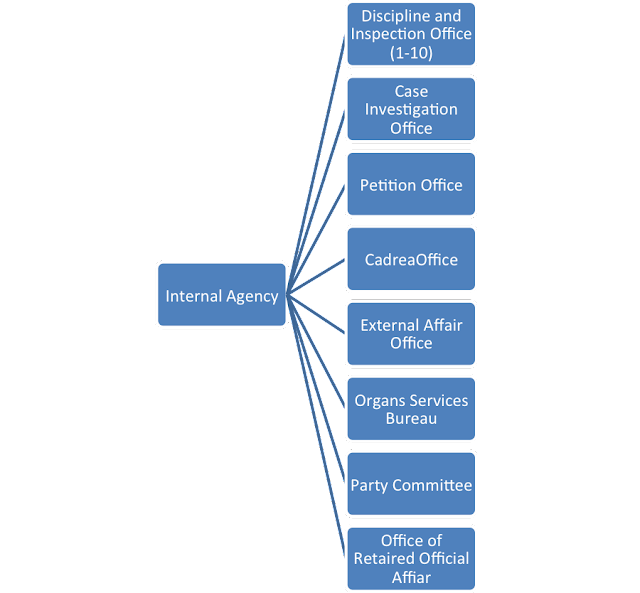 The website for CCDI and MOS has also published the standard procedure for handling reports from the people. There are 4 ways of reporting or filing a case to the authority. Personal visitation to the headquarter, write letters to report a case, make a phone call (12388) and report a case on the website. There are also four steps for answering each report. First step is preliminary work. The CCDI & MOS would sterilize, categorize and reorganize each complaint or report. The second step is accepting and registering the case. Workers would read letters, online filings, interview people who made complaints. The third step is processing the complaints. Based on the rules and details of each case, the authority will make decision for how to process each case. The last step is to give a feedback to the person who files the complaints or reports to the authority.

It is clear that, the authority trying to lunch a fresh looking website with easy accessing information and simple instructions for the public to file complaints over officials’ inappropriate or illegal activity.

Xi had lunched his “eight rules” as part of his “Anti-Corruption” and “Anti-bureaucracy” campaign at the beginning of this year. Media and courts are quite busy since the beginning of this year. (The "eight rules" are listed below at [4]). News about trials or investigations on some officials’ inappropriate behavior or illegal activity is frequently jumped on the top of the news line. As part of eight rule campaign, Measures for Central CPC and State Agencies’ Conference Budget Management was released by state agency Ministry of Finance. The new measurements will be officially executed next year April 1st, the starting date of each fiscal year. This new measures designed to eliminate any extravagant spending on the conference, which is consisted with Xi’s new campaign of anti-extravagant spending behavior. Moreover, these measures applied to both CPC agencies as well as State agencies. It also specifically requiring different levels of conference or meeting has different restrictions over the number of participants, number of dates, budget for housing and transportation. The South China Morning Post reported: "The rules adopted by the new 25-member Politburo early last month appear aimed at appeasing mounting popular anger over an avalanche of social ills, with official corruption and injustice among the top public concerns." [5]

Here I have few highlights for the rules:

· The rules applied to both State and CPC agencies;

· Detailed list different levels of conference and meeting had different standards of budget;

· Except first level meeting, other levels of meeting or conference should be held in hotels less than 4 stars. It’s prohibited to hold conference in any natural resorts that on the black list of State Council.

· Reporting system and publication system for conference budget management should be gradually established. When the conditions are meet, report it to the public.