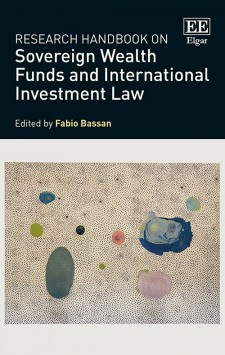 A summary of the chapters follow, along with the table of contents.   Also included is the abstract of my chapter with links to text of the chapter.

Chapter 1 provides a general overview of the SWF scenario.  It also undertakes a comparative analysis of SWFs, with a focus on their size and growth.  Also considered are SWF investment universe.

Chapter 2 undertakes an analysis of the several definitions of SWFs that have been elaborated by scholars.  The authors then propose a new one.  An issue considered is the extent to which pension funds ought to be included within the SWF family.  Also considered are the consequences of definition--including the application of codes of conduct, national investment rules, and international trade and investment treaties.   These definitional issues are critical to the discussion of regulation by determining the scope to which SWF regulation will reach.

Chapter 3 illustrates SWF characteristics in different geographical areas and regions. It suggests that classification systems require greater sophistication to account for the distinct ideologies and macro-economic premises underlying the construction of funds that have as their objective investment beyond national borders.  The competing ideological bases of SWF definition are considered and the consequences of each are outlined.


PART IV SWF AND REGULATION AT REGIONAL AND NATIONAL LEVEL
6. The Foreign Investment and National Security Act Of 2007: An Assessment of its Impact on Sovereign Wealth Funds and State - Owned Enterprises
Paul Rose

Chapter 6 considers the effects of national regulatory systems designed to create gatekeeper regimes for inbound SWF investment.  Particular attention is paid to the effects of the U.S. Foreign Investment and National Security Act (FINSA). The chapter considered the extent to which the legal regime fostered competitive neutrality as between SWF and SOE investment and whether FINSA actually accomplished its national security protective objectives.

Chapter 7 considered similar issues with respect to the actions of the European Union.  Particular attention was paid to the role that EU rules  may play in light of the fundamental obligations of free movement of capital and establishment.   It also considered  the role that the Lisbon Treaty, golden share cases and the judgments of the European Court of Justice may affect the balance of competence between EU Member States and the EU institutions.

Chapter 8 examines tax regimes applied to SWFs.  These tax regimes vary widely among states. A comparative analysis is undertaken with a focus on the United States and key Member States of the European Union, Switzerland and Norway.

Chapter 9 examines the issue of sovereign immunity and SWFs.  Specifically it examines the extent to which SWFs may enjoy jurisdictional immunity by law or contract.  The chapter also considers whether grounds for immunity claims may exist by reason of SWF structure and governance, investment purpose, financing purpose or investment nature.

Chapter 11considers the possible contradiction between SWF economic objectives and the emerging regimes of human rights protections in the context of enterprise operation. It explores whether there is a contradiction among financial versus social investment criteria. It examines the deterrence effect of human rights regimes within SWF behavior and the role of complicity.  Also considered is the extent to which state duty to protect human rights applies to SWFs as state instrumentalities.

Chapter 12 examines the relationship between SWF investment and environmental protection obligations. The chapter focuses on the relationship between SWF practices both internally (codes of conduct and the like) and externally (investment policy, GAPPs).   The chapter considers the extent to which SWF investment decisions may be evidence of complicity in the environmental damage caused by enterprises in which SWFs invest.  Also considered is the extent of necessary environmental dur diligence by SWFs and SOEs.

Chapter 13 considers the effectiveness sof SWFs as sovereign development funds.   It places that examination within the context of World Bank and other institutional movement toward the use of SWFs for development, especially within small and developing states with substantial natural resource income. It also considers the differences between SOEs and SWFs as development instruments.

"SWFs in Five Continents and Three Narratives: Similarities and Differences"

Organized and targeted state interventions in private markets, especially with respect to investments beyond their own territories, have raised complex issues. These public activities effectuated through private markets abroad, particularly when undertaken in the form of sovereign wealth funds (SWFs,) raise issues with respect to the viability of the private market-based foundations of globalization. These issues become more acute as the separation between the economic and political interests of sovereign investors becomes less clear and as that blurred line of separation crosses over from the domestic to international arenas. The issues become more complex as SWFs become ever more varied in structure, objectives, operations and habits. The most successful response has produced a master narrative, a transcendent and universal truth, of SWFs, that situates this phenomenon legitimately within the logic the emerging anarchic and polycentric global ordering, and two alternative visions. Yet even within these narratives, the myth of the monolithic SWF has resulted in a tendency to exclude rather than study the variety and regionalization of SWFs as they are developing in fact. Is it possible to discern regional affinities among SWFs even within the emerging narratives within which SWFs are conceived? This chapter explores SWF regionalization grounded in three distinct narrative foundations for SWF regionalism — an economic purpose narrative, a legalist narrative, and a corporatist narrative. The first currently serves as the “master narrative” of SWFs and as the lens through which SWFs are understood and around which analysis (especially social science and political analysis) and theory tend to be structured. The other two are alternative narratives that sometimes layer and sometimes seek to displace the master economics narrative. Each produces its own approach to understanding SWF regionalism. My thesis is that geographic proximity alone does not explain the variation in SWF form, though political and cultural affinity may. Instead, the distinctive narratives within which SWFs are conceptualized produce forms of regionalization that provide a powerful tool for structuring analysis of differences among national SWF models. But each tends to ignore the heterogeneity of SWF form and operation (which aligns with the anarchy and polycentricity of globalization). More importantly each serves to reinforce power structures that are used instrumentally — in this case to suggest a grand theory of SWF legitimacy and the conditions under which it can be realized. In particular, the “regional” categories discernable through the distinctive lenses of the narratives produce clearly distinctive “regions” of SWFs, grounded on the logic of the narrative rather than on the geographic home of the SWF. Part II considers the logic of each of the narratives. Part III then considers regionalization under each of these narratives, with a focus on the connection between geographic and narrative regionalism.