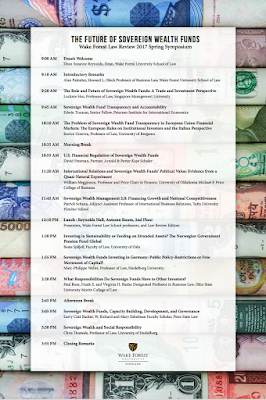 It is my great pleasure to announce an upcoming conference: The Future of Sovereign Wealth Funds, sponsored by the Wake Forest Law Review 2017 as their Spring Symposium. For conference information please see HERE.

This post includes the very preliminary draft of my conference Paper, Sovereign Wealth Funds, Capacity Building, Development, and Governance, which I will be presenting on March 24. I post it in the hopes of generating comments and discussion among those interested in the subject.

The paper considers the way that SWFs may be transformed by and are transforming the framework of global finance and production relationships. SWFs have already started moving well beyond their idealized form, established within the parameters of the Santiago Principles. SWFs now advance the political and economic projects of states, they serve to strengthen governance, they are the focal point for the normalization of global human rights in economic activities projects, and they also serve to advance the development goals of states. The old issues of the commercial character of these mechanisms, and of their effects of the financial markets and ownership structures of rich home states remains important, but may no longer be the central element pushing the development of SWFs. Law and regulatory structures lag far behind the realities that are taking shape on the ground. The public-private divide, the constraining structures of national principles of taxation and sovereign immunity are now ripe for contestation and change. But on what basis?