The Affair of the Sonic Weapons Attack--Just When Attention Turned to China, Reports of More Injury in Cuba 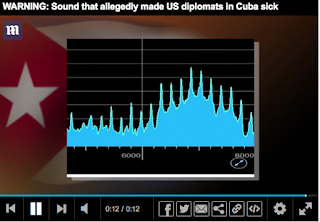 (Two more US workers including a diplomat are pulled from Cuba )


The issue of injury to American nationals, mostly members of the diplomatic staff of the United States continues to make news.  Originally confined for the most part to U.S. (and other) nationals in Cuba (see, e.g. here), it recently emerged as a significant issue in China (see, e.g., here).  One would have thought that attention would now turn decisively from Cuba to China.

But that has not been the case.  Two more U.S: nationals  have been repatriated complaining of "sonic symptoms."  (Two more US workers including a diplomat are pulled from Cuba and are being tested for possible brain injuries following reports of strange sounds).  "Cuba said it sent investigators to the home who found no potential source of a sound and were not granted access to the official." (Ibid.).


As a side note, on 13 June 2018, the U.S. Court of Appeals for the 2nd Circuit ruled that"purposefully using a LRAD [long‐range acoustic device] in a manner capable of causing serious injury to move non‐violent protesters to the sidewalks violates the Fourteenth Amendment under clearly established law." Edrei v. Maguire, No. 17-2065 (2018) (discussed here and more in a future post).

The latest report follows. The issues get more interesting--in law and policy.

Two US workers have been pulled from Cuba and are being tested for possible brain injuries, one of whom is diplomat and felt ill after hearing 'undefined sounds' in her home in Havana.

U.S. officials said Friday that they had pulled two workers from Cuba and were testing them for possible brain injury.

Cuba said in a statement released by its Foreign Ministry that U.S. officials reported on May 29 that a female embassy official had reported experiencing 'health symptoms' after hearing the sounds in her home two days earlier.

Cuba said it sent investigators to the home who found no potential source of a sound and were not granted access to the official.

The two individuals are considered 'potentially new cases' but have not yet been 'medically confirmed,' a State Department official said.

Two other officials said the individuals have been brought for testing to the University of Pennsylvania, where doctors have been evaluating, treating and studying Americans affected in Cuba last year as well as almost 10 new possible cases from a U.S. consulate in China.

The officials weren't authorized to comment publicly and requested anonymity.

If confirmed by doctors to have the same condition, the two individuals would mark the 25th and 26th confirmed patients from the bizarre incidents in Cuba that were first disclosed last year and have been deemed 'specific attacks' by the U.S. government.

The United States has said it doesn't know who is behind it, but has argued Cuba is responsible for protecting all diplomats on its soil. Cuba has denied any involvement in or knowledge of what may have caused the injuries.

'Cuba has publicly and officially reiterated its willing to cooperate seriously in the joint search for answers, clarity and the solution of the alleged facts,' the Cuban statement said Sunday.

'The Ministry of Foreign Relations reiterates that no evidence of the alleged incidents has been presented, and maintains its unwavering commitment to cooperate with U.S. authorities.'

The potential new cases come as the U.S. has being issuing health alerts to Americans in China after a worker at the U.S. Consulate in Guangzhou reported symptoms and strange sounds and was flown to the U.S.

That worker was then medically confirmed to have 'suffered a medical incident consistent with what other U.S. government personnel experienced in Havana, Cuba,' the State Department has said.